Oil price rallies and resumes the upside momentum also because the USD/CAD has touched fresh new lows on Thursday. Brent managed to climb above the 54.50 psychological level and is targeting new highs if will have enough energy to stabilize somewhere above this level

Price increased sharply also because the USD is weakened by the United States data, the greenback has taken another hit from the Unemployment Claims today, which have reached the highest level since March 5, 2015. The Initial Claims were reported at 298k jobs in the previous week, much higher versus the 245K estimate.

The Brent Oil stays higher even if the United States Crude Oil Inventories have increased more than expected in the previous week. The Crude Levels were reported at 4.6 million barrels, beating the 4.1M estimate.

You can see that the Brent Oil has managed to jump above the warning line (WL1) of the descending pitchfork and tries also to close above the 54.56 previous high. The breakout needs confirmation, so only a retest of the warning line (WL1) will confirm a further increase towards the $57 per barrel. Could come to retest also the 61.6% retracement level before will climb towards fresh new highs. Personally, I would like to see a minor consolidation before will increase further, needs to capture more directional energy to be able to approach and reach the median line (ML) of the major ascending pitchfork. 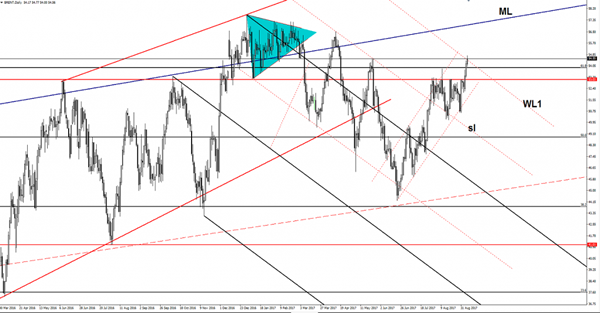