GBPAUD came under selling interest again on Wednesday, after it hit resistance at the 1.6890 barrier, which provided support between August 30 and September 9. In the bigger picture, even after Monday and Tuesday’s recovery, the pair remained below the lower end of the prior sideways range that contained the price action between March 18 and August 11, which suggests a bearish near-term outlook.

The RSI and the MACD add credence to that view. The former is slightly above 30, pointing down, while the latter is lying below both its zero and trigger lines, pointing south as well.

A break below today’s low of 1.6470 could carry larger bearish implications and perhaps set the stage for declines all the way down to Monday’s low of 1.5930. If the bears don’t stop there, their next challenge may be the 1.5790 zone, defined as a support by the low of October 26, 2016.

On the upside, a break above 1.7200 could signal the pair’s return within the aforementioned range, while the move that could change the outlook to positive may be a break above the upper bound of the aforementioned range at around 1.7825. Something like that could encourage the bulls to extend their advance towards the peak of March 15 at 18170, or the high of March 3 at 1.8385.

In brief, GBPAUD remains below the lower bound of a prior sideways range and today it came under renewed selling interest. This suggests that the bears could maintain control for a while more. 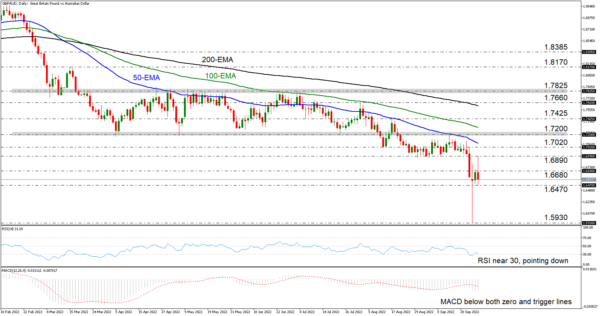