WTI oil futures (December delivery) have been experiencing a prolonged decline since mid-June when the price failed to surpass the 121.00 mark. Although the commodity managed to erase a part of its downtrend after bouncing at the nine-month low of 76.25, the technical picture has deteriorated again in the last couple of daily sessions.

The momentum indicators currently suggest that bearish forces are strengthening. Specifically, the stochastic oscillator is descending near its 20-oversold zone, while the MACD histogram has dived beneath its red signal line but holds above zero.

If selling pressures persist and the price crosses below the 50-day simple moving average (SMA), initial resistance could be met at the recent support of 81.30. Should that floor collapse, the bears could then aim for 78.40. A violation of the latter may trigger a retreat towards the nine-month low of 76.25.

On the flipside, if buyers regain control, oil futures might ascend towards the 90.00 psychological mark before the recent peak of 93.70 comes under examination. Conquering this barricade, further advances could then stall at the 97.50 region, which overlaps with the 200-day SMA. Even higher, the 102.00 hurdle could prove a tough one for the price to overcome.

Overall, WTI oil futures appear to be losing ground as negative momentum intensifies. Therefore, a successful break below the 50-day SMA might accelerate the downfall. 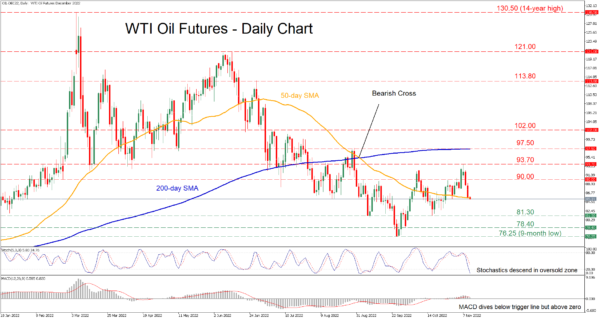