WTI crude oil futures are heading south with the next major support coming from the ten-month low of 75.28. The 20- and 50-day simple moving averages (SMAs) are ready for a bearish crossover, indicating more losses, while the price is still developing well below the downtrend line.

The descending move in the RSI and the slowdown in the stochastic justify the selling pressure, as both remain near their negative thresholds, keeping the short-term risk skewed to the downside. The MACD is also comfortably within the negative territory and below its red signal line, losing some further steam.

Should selling forces strengthen, the ten-month trough of 75.28 will come under the spotlight. The 200-weekly SMA could also turn as support near the 65.87 barrier, while moving lower the long-term picture could be strongly bearish, testing the 57.25 mark, registered in April 2021.

Alternatively, a close above the 81.25 resistance will take the market towards the short-term SMAs near 84.80 ahead of the downtrend line at 87.10. Beyond that, the rally may gear up to 92.30, brightening the outlook.

In brief, oil prices are facing a strongly bearish picture, where a drop below the ten-month bottom is expected to enhance selling interest. 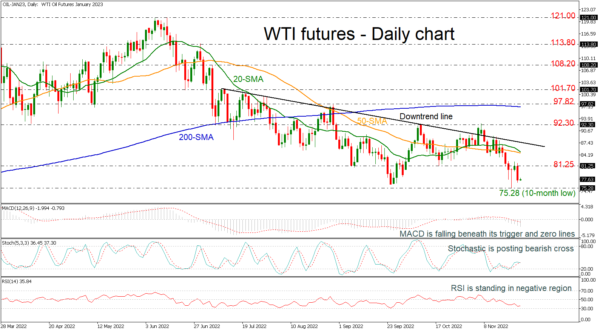