EURJPY has been in a prolonged uptrend since early March, generating consecutive multi-year peaks. However, the pair has been losing ground in the short term after its rally paused at the eight-year high of 148.39.

The momentum indicators currently suggest that bearish forces are strengthening. Specifically, the RSI has crossed below its 50-neutral mark, while the MACD histogram is retreating further below both zero and its red signal line.

If sellers push the price lower, initial support could be met at the recent low of 142.54. Diving beneath that region, the bears could aim for 141.00 before the spotlight turns to the September low of 137.30. Even lower, the 135.50 hurdle could provide downside protection.

On the flipside, bullish actions could boost the price towards the 50-day simple average (SMA), currently at 144.28. Piercing through that zone, the pair could ascend towards 146.12 or higher to test the 147.75 barrier.  A break above the latter might then set the stage for the eight-year high of 148.39.

In brief, EURJPY appears ready to extend its pullback as negative momentum is intensifying. Therefore, a break below the recent low of 142.54 might open the door for further downside. 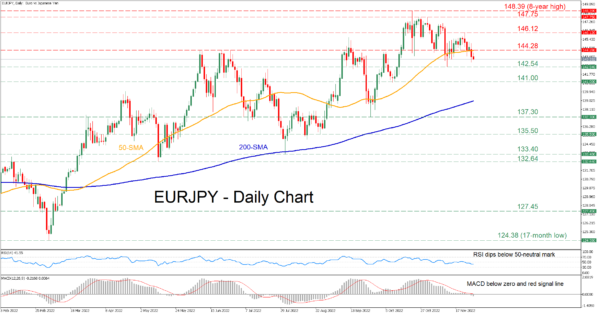