During the past two weeks, the Australian Dollar has weakened against its Canadian counterpart. This movement downwards was confined in a falling wedge. Along the way, the Aussie likewise breached a medium-term channel early on Wednesday when sluggish Australian wage data initiated a selling spree for the pair. The pair has since returned at an intersection of both patterns circa 0.97. It should be noted that these patterns signal to opposite directions, as falling wedge is generally a bullish pattern, while a breakout of the channel should mean a subsequent decrease in value. Taking into account technical indicators and the seniority of the channel, it is more likely that the bearish sentiment prevails and sends the rate for a plunge. A possible stopping point could be the monthly S2 at 0.9562. Conversely, a strong resistance cluster is formed by the 200-hour SMA, the weekly PP and the monthly S2 in the 0.9740/50 territory. 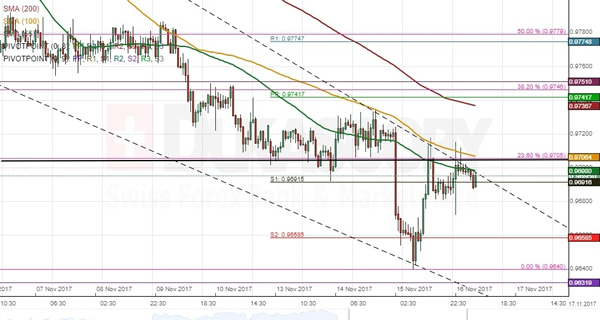