After breaching a seven-month channel on November 14, the common European currency began trading in a flat channel up. The pair tested its upper boundary circa 1.57 early on Monday, but has nevertheless failed to move lower, as the significant support formed by the monthly R2, the weekly PP and the 55-, 100– and 200-hour SMAs is restricting the pair in the 1.5630/1.5565 area. From technical point of view, the pair should initiate a new wave down, especially if the one-week channel up drawn with dashed lines is breached within the upcoming hours. However, given the strength of the nearest support cluster, the pair might fail to breach it at once and thus continue its consolidation phase. The pair, however, should eventually edge lower. 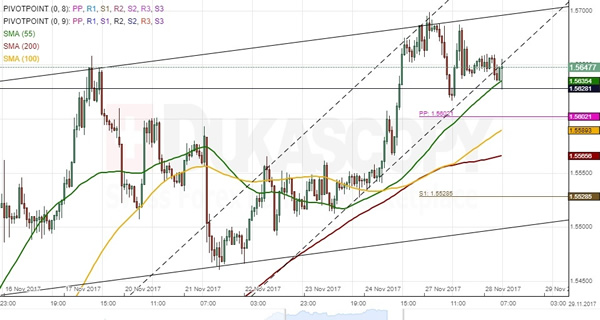