The USDTRY pair remains in steep ascend which extends into fifth straight day and hit new all-time high at 4.2897 on Friday. Strong fall of lira is unlikely to stop soon as bears took out easily round-figure barriers (4.20/ / 4.25) which usually act as strong obstacles. In addition, lira’s strong bearish sentiment which was boosted by recent CBRT policy decision and stronger than expected jump in inflation (Thursday) adds to negative outlook. Lira is also on track for huge weekly loss (the biggest weekly fall since mid-Oct 2008) which is expected to heavily weigh on currency’s short-term action. Better than expected US jobs data could boost the greenback and further depress Turkish lira that could result in break above psychological 4.30 barrier. Break through 4.30 would open Fibonacci projections at 4.3101 (161.8%) and 4.3824 (200%), with stronger bullish acceleration expected to bring another strong psychological barrier at 4.50. Bullish daily / weekly techs continue to drive the pair higher, ignoring so far overbought conditions, but some corrective action could be anticipated in coming session. 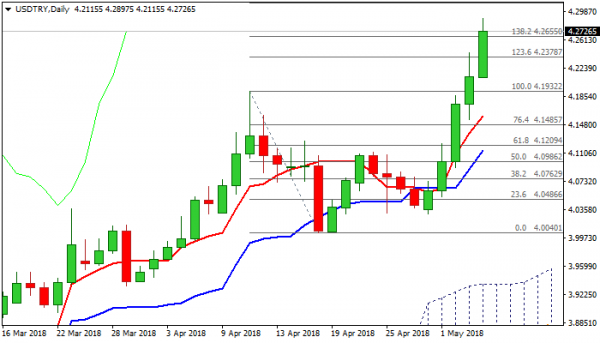