The EURUSD pair held within narrow range in Asia and early Europe, with fresh lows at 1.0570, forming hourly double-bottom that underpinned near-term price action. Base of thin daily Ichimoku cloud, spanned between 1.0584 and 1.0614, kept the downside protected, despite several probes below.

Little change was seen on late Monday’s comments from Fed Chair Janet Yellen, as she said nothing new and gave no firmer signals about the timing of next rate hike that traders were awaiting.

The pair received support from European data and spiked at 1.0620 in mid-European session. German ZEW data showed investor morale rose to its highest level since Aug 2015, surging to 19.5 in April from 12.8 in March and well above consensus at 14.0. Economic sentiment in the largest European economy brightened after strong first quarter, on concerns about protectionism from Trump’s administration.

Eurozone industrial output fell by 0.3% in February on m/m but rose by 1.2% y/y. However both releases were below forecasts for increase by 0.1% m/m and by 2.0% y/y. Decline in Industrial Output was mainly due to a sharp drop in energy production.

Beginning of the US session brought more activities in the markets. The US dollar fell across the board on increasing geopolitical risk and declining US Treasury yields that prompted traders to heavily exit dollar positions.

The EURUSD spiked to 1.0630, the highest of the US session but was unable to hold gains and returned back to 1.0600 zone.

The action signalled that the Euro is lacking momentum for stronger upside action and firm break above strong barriers, formed by daily Ichimoku cloud top at 1.0614 and 100SMA at 1.0622. Despite initial signals of recovery, the pair is still holding in the dangerous zone below 1.0614/22 barriers that keeps the downside at risk. 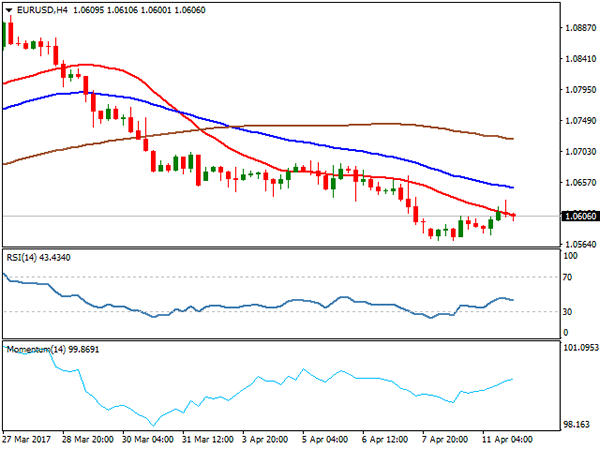 Japanese yen was among the top gainers on Tuesday and rose above 110.00 barrier against the US dollar. Yen received strong boost by rising geopolitical tensions over North Korea and Syria, as investors rushed into safe haven assets on fears that current tensions might escalate on rising possibilities of US military action in these two countries. Tensions over Syria brought relations between America and Russia to the lowest levels since the cold war era, with serious threats that current verbal conflict may escalate.

Strong safe haven yen-buying pushed the USDJPY eventually below key 110.00 support, after the pair traded for more than two weeks above 110.00, where near-term base was formed. Break below 110.00 could accelerate on triggering stops below and could extend the wave C (on which the pair is currently riding) of five-wave cycle from 118.60, towards its Fibonacci 100% expansion at 108.48.

Lomg bearish daily candle that was formed on Tuesday is expected to weigh on near-term action. 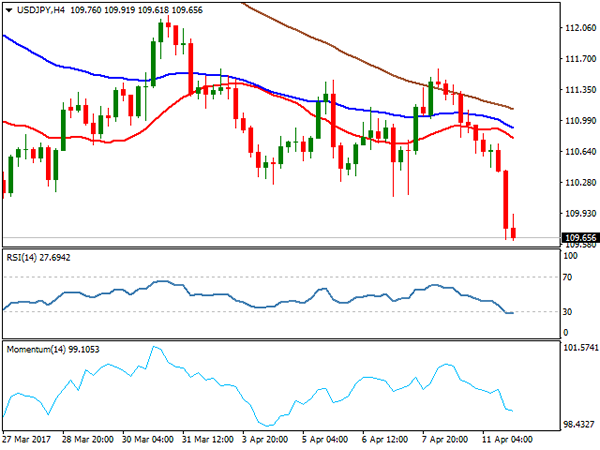 Firm break above last Thursday’s high at 1.2505 will generate another bullish signal.

The pair will be also focusing release of UK jobs data and speech of BOE’s Governor Carney, for further signals.

UK jobless claims are expected to fall in March, according to -3.0K forecast vs Feb’s fall to -11.3K. Unemployment rate is expected to stay unchanged at 4.7% in Feb, as well as Average Earnings at 2.2% in Feb. 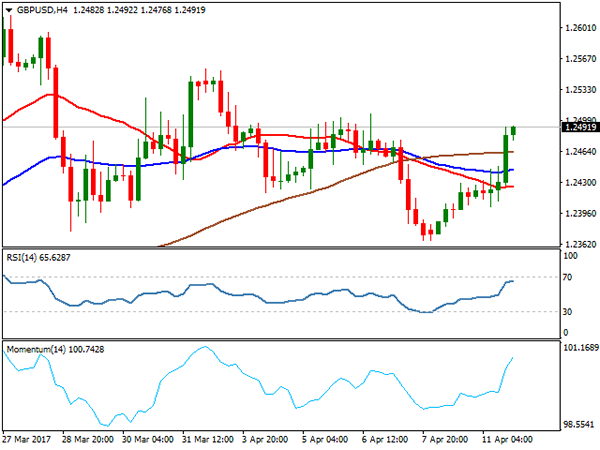 The Aussie dollar has left the second consecutive Doji candle after broader descend from 0.7747 high showed signs of stall. The pair found footstep 0.7473, above which is holding for the second day, but within limited consolidation that is so far capped by 100SMA at 0.7513. Extended daily studies warn of corrective bounce, as slow stochastic is reversing in deep oversold territory, but without firmer bullish signal for now.

The pair is holding deeply in thick daily Ichimoku cloud, with bearish studies signalling further weakness towards key support at 0.7449 )daily cloud base.

However, break out of current congestion is required for fresh direction signals. Strong barriers at 0.7513/50 (100/200SMA’s) would likely limit extended upticks, while only sustained break above 200SMA pivot would generate stronger correction signal.

Data from Australia, released on Tuesday, showed Australian business conditions jumped in March to highs not seen since before global financial crisis. Australia’s NAB monthly survey of more than 400 firms showed its index climbed to+14 in March, well above long run average at +5. Upbeat data, however, did not show stronger impact on pair’s performance on Tuesday. 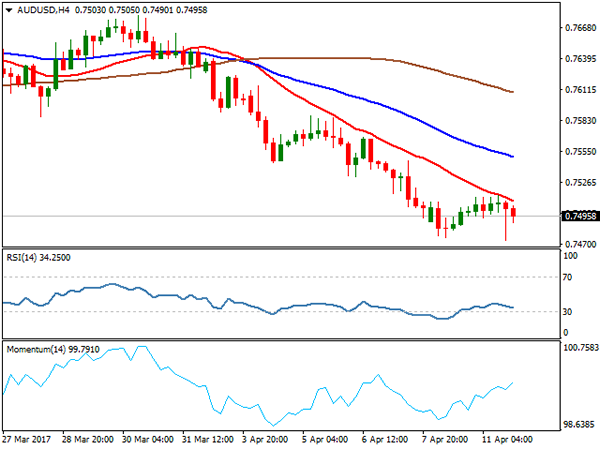 The GBPCAD pair rallied strongly on Tuesday, on fresh strength of sterling and neutralized strong downside risk that mounted of steep fall in past three days. Descend was contained by pivotal support at 1.6532 (Fibonacci 61.8% retracement of 1.6311/1.6888 ascend) and subsequent bounce retraced 50% of the latest 1.6800/1.6515 downleg.

Rally is looking for final break above thick hourly Ichimoku cloud at 1.6658, to confirm bullish resumption. 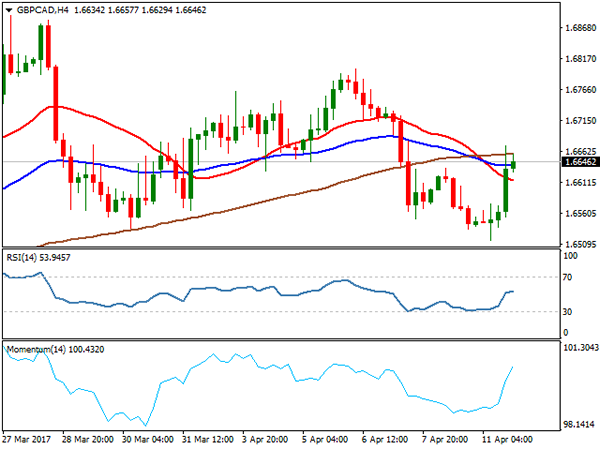 Spot Gold was another top winner of Tuesday’s strong safe haven buying, triggered by rising geopolitical uncertainty that triggered traders’ migration from dollar into traditional safe haven asset Gold. The yellow metal was up 1.6% on Tuesday, running from $1253 low to the American session high at $1275, the highest since Nov 9. Tuesday’s strong rally has eventually taken out strong barriers at 1257 (200SMA) which resisted several attacks during past two weeks and former top of 27 Feb at $1263, also probing above Monday’s spike high at $1270. Fresh bulls also closed above important $1255 barrier (Fibo 61.8% of larger $1337/$1122 descend, generating another bullish signal.

Rising tensions over North Korea and Middle East, along with upcoming French elections, keep investors nervous and these are supportive factors for further rise in gold’s price. Firm close above $1260 zone will be seen as strong bullish signal for gold. 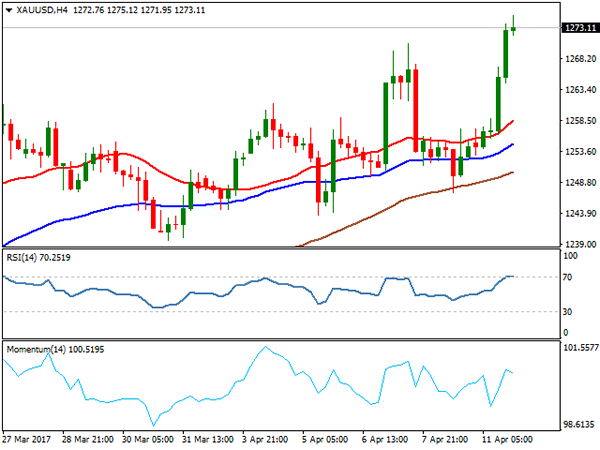 WTI oil posted marginally higher five-week high at $53.41 on Tuesday, after correcting lower to $52.68, following strong ascend in past three days. Doji candle that was formed on Tuesday could be seen as initial signal of rally’s stall on strongly overbought daily slow stochastic and from the fundamental side, rising US shale oil production that for now offsets strong support to the oil prices on rising geopolitical tensions.

Oil price, however, remains well supported in the near-term and could rally strongly on escalation of current political crisis, but consolidation and possible corrective easing are in near-term agenda.

No firmer signals from technical studies, will keep oil price in bullish mode for now. 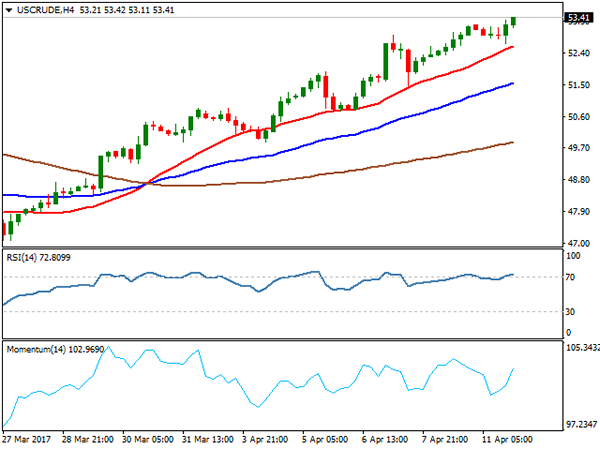 Dow Jones remains motionless for the third consecutive day and left another Doji candle that signals strong indecision. US stocks moved lower on Tuesday, on rising concerns about Syria and North Korea, but losses were limited, as investors preferred to play safe amid rising geopolitical tensions. Dow Jones moved within 20447/20623 range on Tuesday, but mainly stayed between converging 20/55 SMA’s that mark initial pivots at 20657/20547 respectively and sustained break of either would generate fresh near-term signal. In addition, studies on daily chart are in neutral mode and show no clear direction signal for now. 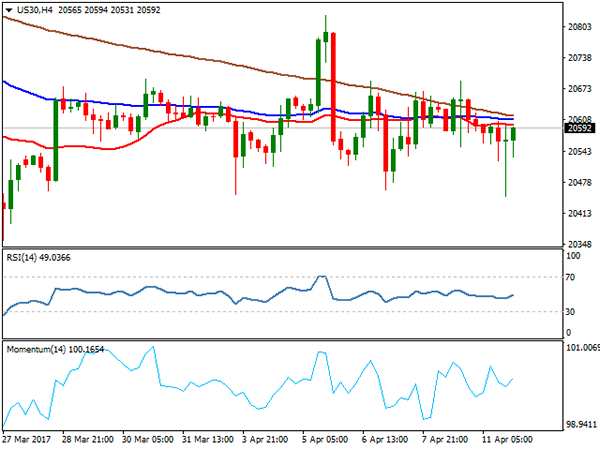 Extension and close above 7343 pivot is expected to generate another strong bullish signal. 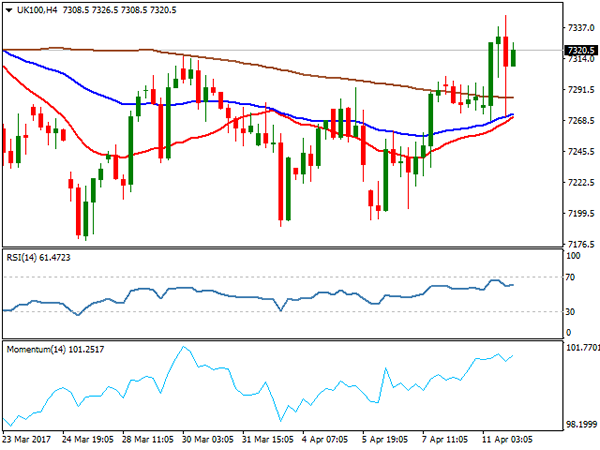 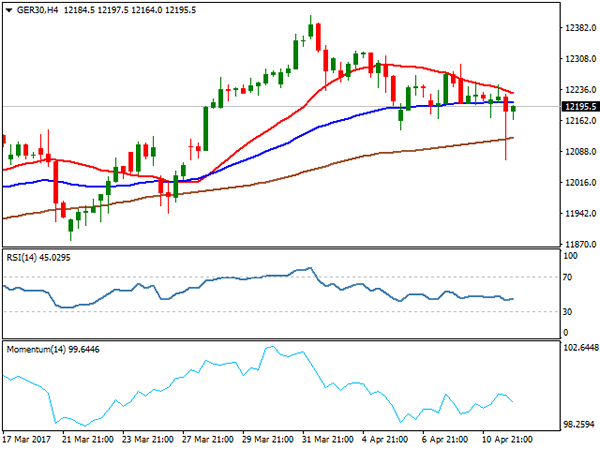