WTI crude oil opened the week higher and is back above 60. Saudi Arabia announced during the weekend to cut oil exports by 500k bpd in December. Its Energy Minister Khalid Al-Falih said on Sunday that demand for Saudi oil is “tapering off” partly due to seasonal factors. And, he pledged that “we as responsible producers are going to work, and work hard, to balance the market within a reasonable corridor.”

The OPEC+ also said in a post-meeting statement that it might need new strategies onwards. It said “the committee reviewed current oil supply and demand fundamentals and noted that 2019 prospects point to higher supply growth than global requirements.” And, weaker global economic growth “could lead to widening the gap between supply and demand.”

WTI crude oil topped at 77.06 back in early October but then persistently dropped to as low as 59.37 last week. A key factor driving the free fall was the erratic sanction policy of the US on Iran. Trump initially insisted to restrict all Iranian exports to the world. But it turned out that waivers were granted to eight countries on oil trade with Iran, including Taiwan.

Technically, today’s recovery is so far not strong enough to warrant a change in near term down trend. 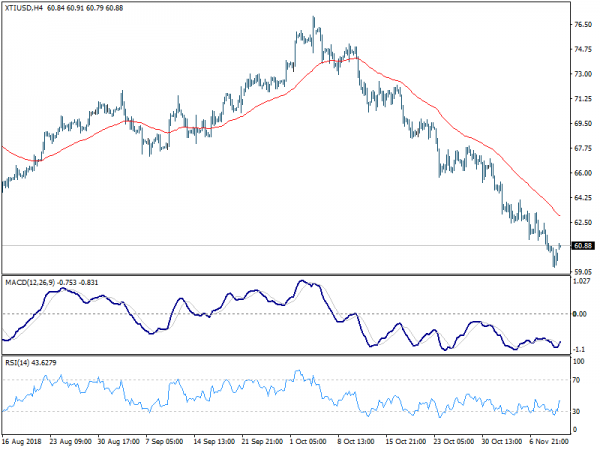