WTO’s World Trade Outlook indicator dropped notably from 100.3 to 98.6 according to data released today. That’s the lowest level since October 2016, with declines in all component indices. WTO said in the release that it signals trade growth in the coming months is “expected to be below-trend”. 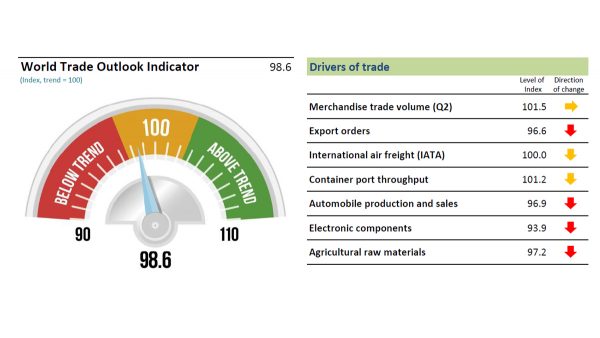 WTO said that “the continued moderation in the overall WTOI index was driven by the steady decline in the export orders index (96.6), which remains below trend and is approaching the weakest point recorded in 2012 during the eurozone crisis”. And, “The latest results are consistent with the WTO’s downgraded outlook for global trade issued in September amid escalating trade tensions and tighter credit conditions in important markets. The revised forecast anticipated trade expansion to slow to 3.9% in 2018 and 3.7% in 2019 from 4.7% in 2017.”