New Zealand Dollar jumps sharply after RBNZ turned out to be less dovish than expected. OCR was kept at 1.75% as widely expected. And, the central bank restored the language that “the direction of our next OCR move could be up or down” in the statement. However, there was no more dovish tweak.

In short, RBNZ expected interest rate to be unchanged at current level “through 2019 and 2020”. It maintained the view that “As capacity pressures build, consumer price inflation is expected to rise to around the mid-point of our target range at 2 percent.”

The overall statement was pretty balanced and did nothing to endorse market speculation of a rate cut by year end.

With today’s strong rebound in NZD/USD, focus is back on 0.6941 resistance. Firm break there will complete the corrective pattern from 0.6969 and resume the whole rise from 0.6424. That will be a rather bullish development, but only until it happens. 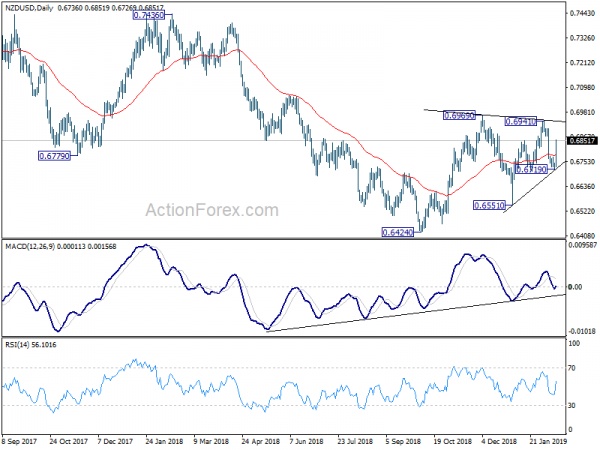