The high-level meeting between US and Mexico on migration ended with insufficient progress. Trump tweeted that “Progress is being made, but not nearly enough!” He threatened again “If no agreement is reached, Tariffs at the 5% level will begin on Monday, with monthly increases as per schedule. The higher the Tariffs go, the higher the number of companies that will move back to the USA!”

Vice President Mike Pence, who chaired the meeting including Secretary of State Michael Pompeo and Mexican Foreign Minister Marcelo Ebrard, also echoed Trump’s comments. He tweeted “Progress was made but as @POTUS said “not nearly enough.” @SecPompe, @DHSMcAleenan, & I made clear: Mexico must do more to address the urgent crisis at our Southern Border.”

Ebrard said after the meeting that there was no discussions on tariffs. “The dialogue was focused on migration flows and what Mexico is doing or is proposing to the United States, our concern about the Central American situation.” He noted “what the US government is looking for are measures in the short-term and medium-term”. Instead, Mexico is promoting long term fix involving a development deal for Central America which would eventually slow migration.

Meeting will continue on Thursday and if no agreement is made, US will starting imposing 5% tariffs on all Mexican imports on June 10. That rate would “gradually” go up to 25% on October 1.

Fitch cut Mexico’s rating from BBB+ to BBB and cited that “growth continues to underperform, and downside risks are magnified by threats by U.S. President Trump.” Moody’s downgraded Mexico’s outlook from stable to negative and noted “further evidence that medium-term growth is in decline, whether as a result of policies that actively undermine growth or because of continued policy unpredictability, would put downward pressure.”

USD/MXN has a rough ride but is generally kept inside this week’s range. 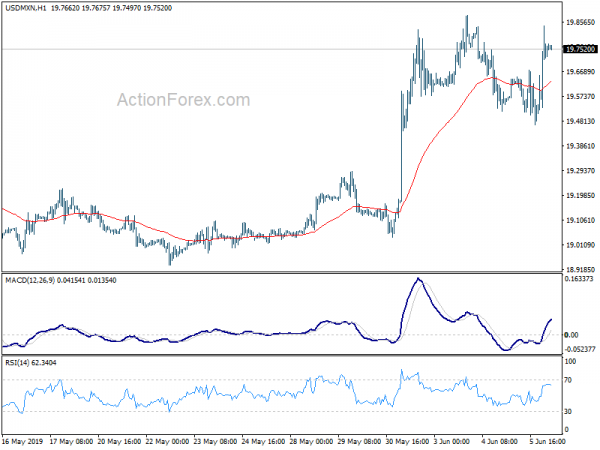