Australian Dollar is said to be lifted by RBA Governor Philip Lowe’s question on effectiveness of further rate cuts. Lowe said in a panel discussion in Canberra today that “it’s a legitimate question to ask how effective further monetary easing would be”.

Lowe explained that exchange rate is an “important channel” through which easing stimulates growth. And other transmission mechanisms “are weaker at the moment.” However, he added “we trade with one another, we don’t trade with Mars, so if everyone’s easing, the effect that we get from exchange-rate depreciation via the transmission mechanism isn’t there.”

Meanwhile, it’s possible to ease more than other major central banks. But Lowe warned this was “quite a dangerous path to go down.” Instead, he urged the country to switch focus to fiscal policy and structural reforms. Also, “governments here and around the world should have their top drawers full with ideas.”

Currently, markets are expecting RBA to cut interest rates by -50bps from 1.25% by year end. The next move could come as early as in August. To us, we also don’t understand why Lowe’s comments could shoot up the Aussie. He didn’t indicate less need to loosen up monetary policies. Rather, he’s simply suggesting that cutting interests are not enough to lift inflation back to target.

AUD/JPY is consolidating above 73.93 temporary low for the moment. Further recovery might be seen. But outlook remains bearish as long as 76.01 resistance holds. Fall from 80.71 is expected to resume sooner or later to 70.27 low. 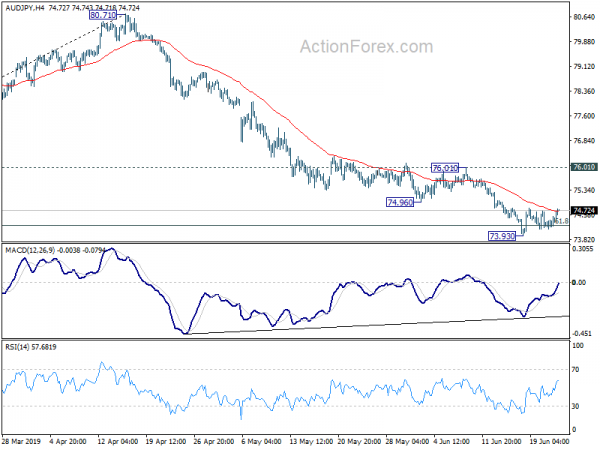