RBNZ rate decision is a major focus of the week. After lowering the policy rate by -25 bps to 1.50% in May, the central bank would likely remain on hold this month. Domestic economic developments came in largely consistent with policymakers’ projections. Q1 GDP growth beat RBNZ’s expectations, but breakdowns were mixed. Forward-looking indicators signaled that risks to growth are skewed to the downside.

Global economic outlook remains uncertain and major central banks have recently shifted their stance on the dovish side. It is unlikely that G20 summit this week would resolve US-China trade war. At best, both sides would agree to resume negotiations. All these should lead the RBNZ to adopt a cautious tone this month, while opening the door for reducing interest rates again later this year.

NZD/USD recovered ahead of 0.6481 support last week mainly due to Dollar’s weakness. Upside of recovery is so far limited below 0.6681 resistance. Thus, near term outlook stays bearish for another decline through 0.6481 to 0.64245 low. Break will resume larger medium term down trend. Though, on the upside, break of 0.6681 will suggests that consolidation pattern from 0.6424 has started the third leg. Rise from 0.6481 could extend towards 0.6969 resistance before completing such consolidation. 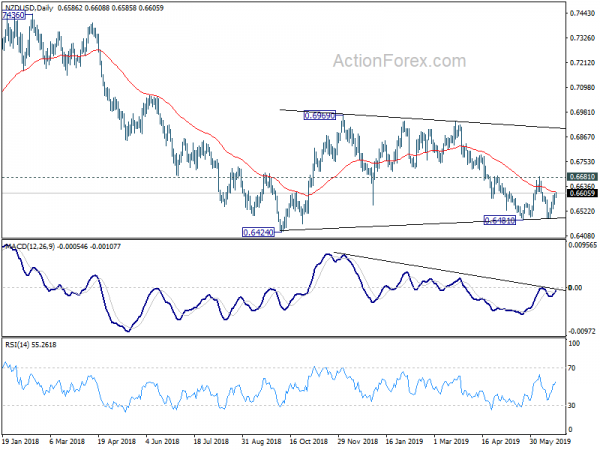 NZD/JPY turned sideway after hitting 70.26. Some consolidations might be seen in near term. But outlook remains bearish as long as 72.25 resistance holds. Current fall from 67.78 is expected to resume sooner or later to retest 69.18 low. Though, break of 72.25 will confirm short term bottoming and bring stronger rebound. 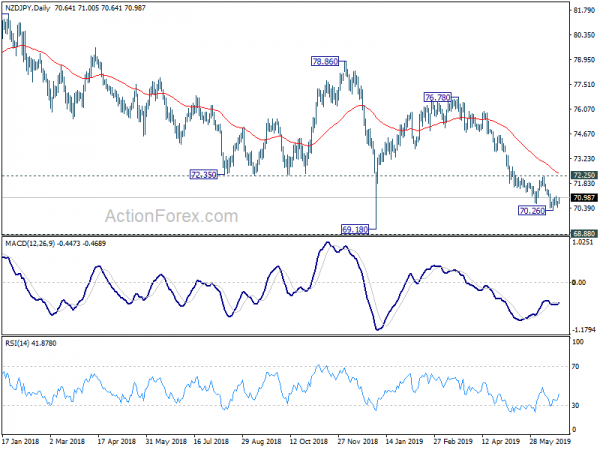