Asia markets tumble broadly, particularly serious in Hong Kong, after US President Donald Trump issued an executive order to ban China’s TikTok and WeChat apps. The orders will go into effect in 45 days, and block all transactions with TikTok’s owner ByteDance, and transactions involving WeChat. The move was made under the International Emergency Economic Powers Act, which allows the president to declare a national emergency, block transactions and seize assets, in response to “unusual and extraordinary threat”.

“To protect our Nation, I took action to address the threat posed by one mobile application, TikTok. Further action is needed to address a similar threat posed by another mobile application, WeChat,” Trump said. “This data collection threatens to allow the Chinese Communist Party access to Americans’ personal and proprietary information — potentially allowing China to track the locations of Federal employees and contractors, build dossiers of personal information for blackmail, and conduct corporate espionage”.

At the time of writing, Hong Kong HSI is down -566 pts or -2.27%. It’s still holding above a near term channel support nevertheless. If HSI could rebound from the current level and break through 25201.43 resistance, near term bullish would be retained for another rise through 26782.61. However, sustained trading below the channel support will argue that the corrective rise from 21139.26 has completed and bring deeper fall to 22519.73 support to confirm. 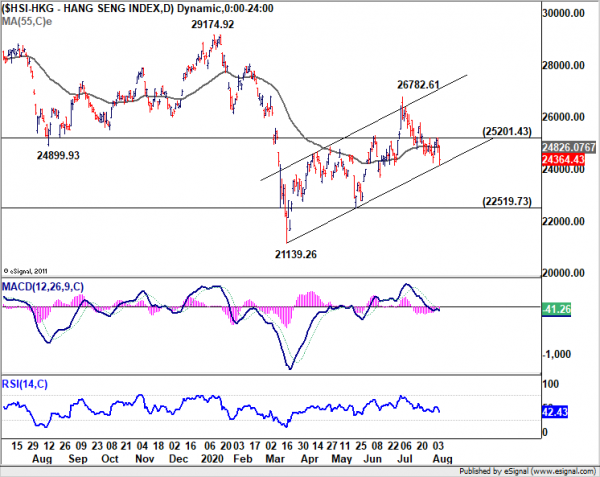