NIESR said retail and hospitality would contribute significantly to UK growth in May. It forecasts monthly GDP growth of 1.5% in May and 0.9% in June. But it also warned that “Postponing the last step of re-opening may delay the recovery in arts and recreation by a few weeks but, if it helps avoid a third wave of infections, it could contribute to sustained recovery in the second half of the year.”

“Like March, April was a month of rapid growth in services output, as anticipated, driven by the re-opening of non-essential retail, outdoor hospitality and near-full attendance in schools. May will follow a similar pattern, as further restrictions are lifted, as will June if the final step of the roadmap goes to plan. But falls in construction and production, which were less affected by the 2021 lockdown, remind us that our focus should now be on the prospects for the economy in the second half of the year, after temporary re-opening effects have ceased to provide strong monthly increases.” Rory Macqueen Principal Economist – Macroeconomic Modelling and Forecasting. 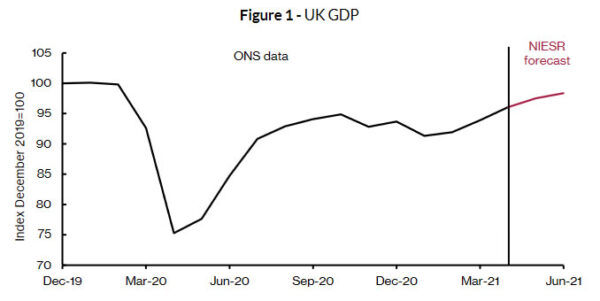