RBNZ surprised the markets as it announced to halt the additional asset purchases under the Large Scale Asset Purchase (LSAP) program by July 23. Meanwhile, OCR was kept unchanged at 0.25%. and the Funding for Lending Program was maintained. The Committee agreed that “the level of monetary stimulus could now be reduced to minimise the risk of not meeting its mandate.”

The central bank said the economy “remains robust” despite ongoing impact from international border restrictions. Aggregate economic activity is already “above its pre-COVID-19 level”. It expected “near-term spikes” in headline CPI in Q2 and Q3, reflecting “one-off” or “temporary” factors. In the absence of any further significant shocks, “more persistent consumer price inflation pressure is expected to build over time due to rising domestic capacity pressures and growing labour shortages”.

New Zealand Dollar jumps broadly after the surprised move by RBNZ. NZD/JPY is back above 77 handle after hitting 75.95 last week. Overall outlook is unchanged that price actions from 80.17 are seen as a correction to rise from 68.86 only. We’d expect strong support from 38.2% retracement of 68.86 to 80.17 at 75.84 to complete the correction.

Focus will now turn to whether current rebound could extend through 78.75 resistance to indicate that such correction has completed. In this case, stronger rise would be seen back to retest 80.17 high first. 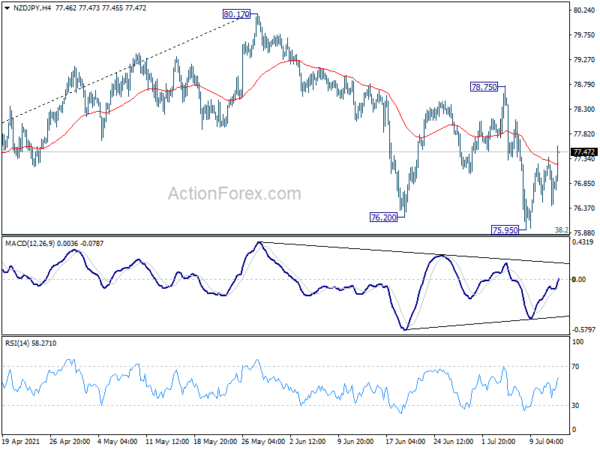 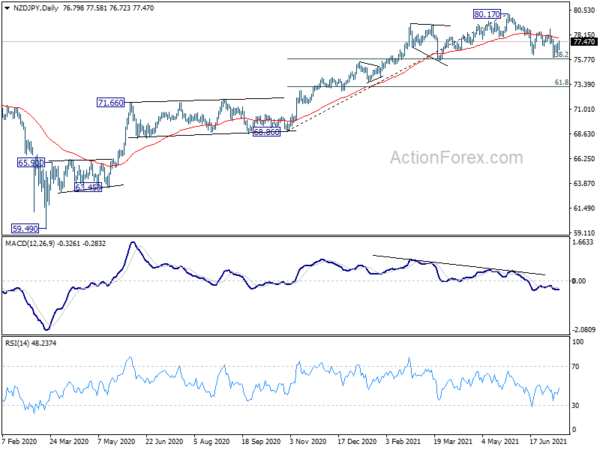