EURJPY, although turning higher from the 100-day simple moving average (SMA) at 123.51, appears to be steering into a sideways market. The fairly flattened slopes of the 50- and 200-day SMAs are piloting a more horizontal price formation, while the intact bullish bias in the SMAs and the rising 100-day one are upholding the positive structure.

The short-term oscillators are reflecting a pickup in positive momentum. The MACD has merged with its red signal line marginally below the zero mark, while the RSI is attempting to capitalise on its push above its neutral threshold. That said, the stochastic oscillator sustains a positive charge backing further advances.

In brief, should positive tones endure, EURJPY’s short-term neutral-to-bullish bias may receive a boost with a break above 125.23. 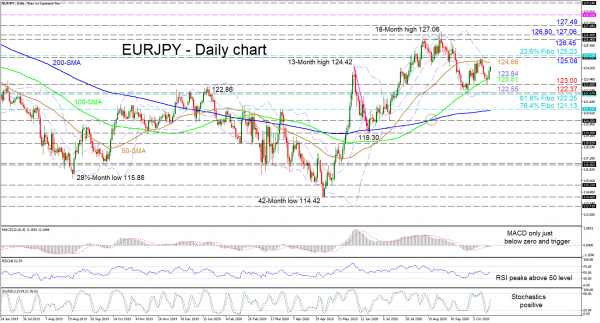