The market has priced in over 50% chance that the RBNZ would lower the OCR, by -25 bps, to 1.50% in May. Major economic indicators since the last meeting weakened. In particular, disappointing employment report and inflation in the first quarter appear to have increased the odds of a rate cut this week.

However, it is not yet a done deal. While the economic growth is slowing down, it is not freezing. It is not impossible for the central bank to wait for more data before making a decision. Whether the central bank cut the policy rate or not, we expect it to deliver a more dovish tone in the monetary policy statement. It would also revise lower the GDP growth and inflation forecasts. It would also lower the path of the OCR. 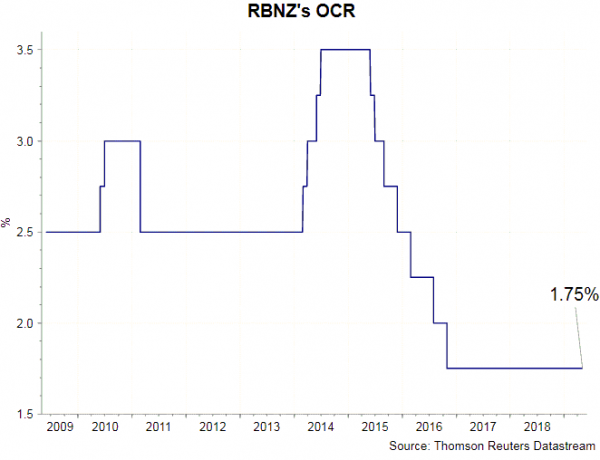 Inflation has continued to slow. Headline CPI decelerated significantly to +1.5% y/y in 1Q19, from +1.9% a quarter ago. The market had anticipated a more modest moderation to +1.7%. The fact that inflation has fallen below the midpoint of RBNZ’s target range of 1-3% should lead the central bank to deepen its dovish bias. On a separate note, GDP growth slowed to +2.3% q/q in 4Q18, weaker than RBNZ’s forecast of +2.7% and the slowest rate since 4Q13.

Yet, there are other developments supporting a no change in the monetary policy. NZDUSD has fallen more than -3% since the March meeting. Such development, expansionary in nature, should be welcomed by the members. Meanwhile, despite sluggishness in wage growth, the annual rate of growth continues to improve gradually. This should be further boosted by the +7.3% increase in the minimum wage on April 1. An optimistic view is that higher wage could later be translated to higher household consumption, as major factor of GDP.

On net, the macroeconomic backdrop appears to justify a rate cut in May. In March, RBNA shifted its monetary stance to dovish from natural, noting that “given the weaker global economic outlook and reduced momentum in domestic spending, the more likely direction of our next OCR move is down”.

Assume a rate cut is announced this week, we expect a more dovish policy statement is accompanied, suggesting further reduction. Even if the central bank decides to stand on the sideline this week, it would deepen the dovish guidance, affirming further deterioration in the economic outlook suggests a rate cut is likely some time later. Whether the central bank cut the policy rate or not, we expect it to revise lower the GDP growth and inflation forecasts. It would also lower the path of the OCR.

EUR/GBP Weak ahead of Eurozone and UK PMIs