Headline CPI in China accelerated to +2.8% y/y in July, from +2.7% a month ago. Same as previous months, the key driver of inflation was food prices, which jumped +9.1% y/y in July. In June, food prices also rose +8.3% y/y. Of which, pork prices soared +27% y/y and fresh fruit prices skyrocketed +39.1%. Non-food price actually slowed -0.1 percentage point to +1.3%. Core inflation, excluding food and energy prices, steadied for a third consecutive month at +1.6%. These signaled that higher inflation does not reflect improvement in Chinese economy. Rather the rising food price would affect consumer expenditure in other items, exacerbating slowdown in the economy.

As we had expected, PPI fell back to deflation for the first time since August 2016. Prices in the oil and gas exploration industry plunged -8.3%, while prices for oil, coal and other fuel processing industries declined -5.1%. The US- China trade war has hurt demand for China’s manufacturing activities and shipment of raw materials. It is not surprising to see PPI go deeper in the negative territory as trade war has intensified.

China’s trade surplus narrowed to US$ 45B in June, from US$ 51B a month ago. As the trade war with the US intensified, the trade surplus with US also narrowed to US$ 28B, from US 30B in June. From a year ago, exports surprisingly jumped +3.3%, after contracting -1.3% in the prior month. Imports contracted -5.6% y/y in July, narrowing from -7.3% previously. The strong growth in exports was supported by shipment of coal and fertilizer. Exports of coal jumped +51% y/y, after declining over the past 2 months, while exports for fertilizer rise +21%. Shipment of these two items gained remarkably from a month ago, by +64% and 42%, respectively. Another surprise is exports of crude oil. Despite recording a -61.8% y/y decline in exports year- to- date, shipment of crude oil jumped +56% m/m in the month of July. It is worth monitoring the situation to see whether these were just one-off increase in exports of these items, or China has found a new channel of exporting its resources. We expect exports to growth further in August. Traders likely front-load their purchases ahead of September 1, the starting date of Trump’s additional 10% tariffs on US$ 300B of Chinese imports. 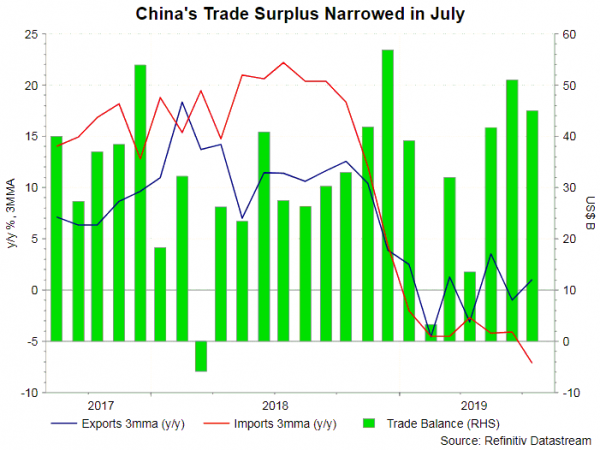 Undoubtedly, PBOC should add further monetary easing to stimulate the economy. As we mentioned in previous reports, the central bank would have to lower RRR further and cut the policy rate. It appears that a good timing of a rate cut would be September, after the new tariff becomes effective and before the FOMC meeting on September 18. the central bank could then gauge the dynamic of the economic development before deciding further rate cuts. Indeed, PBOC might not need to aggressively lower interest rate, as it has a tool that central banks in the advanced economies refrain from using – depreciation of it currency.