China’s economic data surprised to the downside in July. Delay in US tariff should have limited boost on China’s growth outlook. Industrial production gained +4.8% y/y in July, missing consensus of +5.8% and June’s 6.3%. The slowdown is the most severe since February 2009 and caught the market in surprise. Manufacturing PMIs compiled by government and Markit/ Caixin showed upticks in July, despite staying the contractionary territory. Looking into details of the IP report, auto output declined -4.4%, worsening from -2.5% in July, while output growth in general equipment, and computers, communications and other electronic equipment weakened significantly. Moderation in Chinese exports should continue to weigh on IP in coming months.

Retail sales grew +7.6%y/y in July, down from +9.8% a month ago. The market had anticipated a +8.6% growth. Auto sales fell -2.6% y/y, after a +17.2% y/y jump in June. This is the key reason for the weakness in the headline reading. According to the National Bureau of Statistics, retail sales in July would have been 8.8% y/y, if auto sales were excluded. 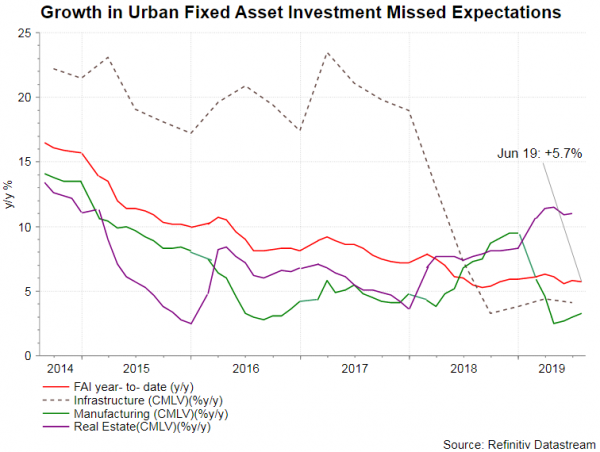 The July data flow generally came in weaker than expectations. We believe government policy is to blame for the disappointment. The government slightly tightened its policy last month amidst better economic data in June and ongoing concerns about housing bubble and debt problems. In order to curb housing demand, many banks, especially those in cities with higher housing prices, have raised mortgage rates. Meanwhile, China’s Politburo has announced that it will “not resort to using the housing market as a short- term stimulus to boost growth”. At the work conference held on August 2, PBOC also pledged to strengthen the supervision and control of funds in the real estate market. Tightening in liquidity is evidenced in the latest money and credit report. Money supply (M2) rose +8.1% y/y in July, easing from +8.5% a month ago. The market had anticipated a +8.4% growth. New renminbi loans fell to RMB 1060B in July, from +1 660B a month ago, while total social financing (TSF) declined to RMB 1010B, compared with consensus of RMB 1620B.

On August 13, the USTR announced to delay implementation of tariff on some Chinese exports. The Department indicated that the the list of Chinese exports (worth of above US$ 300B) that would be potentially subject to an additional 10% is divided into two part. The tariff on the first part would take effect from September 1, while the second part would begin on December 15. The latter includes mainly big-ticket products including cell phones and toys, with a total value of around US$ 180B . Meanwhile, nearly US$ 2B worth of products were removed from the list. The delay might have a short-term boost to the financial markets. Yet, it should not help reverse the downtrend of Chinese economy.