Trade War Continues to Direct Outlook of USDCNY in 2020

As in last year, Chinese Yuan will remain directed by the US-China trade war in 2020. Although China’s economy continues to struggle and PBOC’s monetary policy is tilted to the accommodative side, CNY should stabilize against USD if trade negotiations are smooth. Elevated inflation should keep PBOC cautious in adopting monetary easing. As such, fiscal measures would take the driver’s seat in boosting the economy. This would be less negative to the exchange rate. The major risks to CNY’s outlook is a breakdown in Phase II trade negotiations and dramatic deterioration in economic developments. 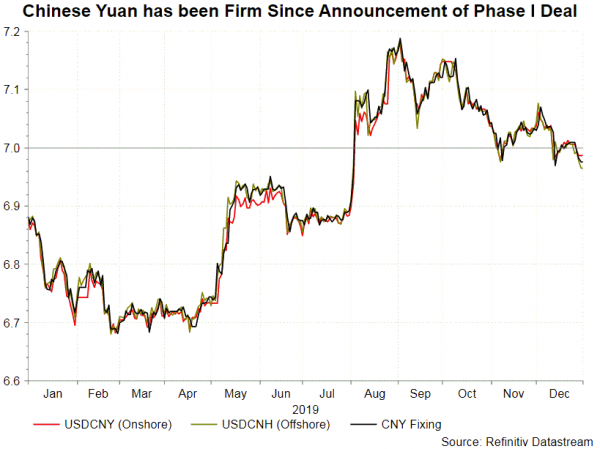 The deadlock in trade war had caused USDCNY to break above 7 in August/September. Subsequent decline of the currency pair in 4Q19 was resulted from the breakthrough – reaching of Phase I trade deal. We expect weakness of the pair continues in the first quarter as the Phase I will be signed soon. CNY will remain supported as the countries progress to Phase II negotiations. However, bumps in the negotiation process should trigger volatility in the currency.

PBOC will maintain accommodative monetary policy stance in 2020 as growth stabilization remains the first priority. On December 23, Premier Li Keqiang affirmed that lower funding costs are needed for SMEs. This is followed by a RRR cut on the first day of 2020. As the official statement noted, the reduction by -50 bps for financial institutions, effective January 6, could release long-term liquidity of about 800B yuan to the market.

Besides RRR, rate cut is another tool to stimulate the economy. On December 27, the central bank announced that, from March 2020, the loan prime rate (LPR) will serve as a new benchmark for pricing existing floating-rate loans. The move can be viewed as an important step to lowering financing costs for the existing loans worth of about 150 trillion yuan in the future. The LPR, launched in August as PBOC’s benchmark rate, is fixed on the 20th of each month. Currently staying at 4.15%, the rate has been cut for three times since August. Each cut was mild (5 or 6 bps) as the central bank is concerned about adding further inflation pressure. We expect RRR, LPR as well as reverse repo rate will drop further in the coming year as the central bank stimulates the economy. Yet, the size of each reduction will be mild.

The government also pledged to adopt a more effective proactive fiscal policy this year, noting that it would make good use of local government (LG) special bonds, as well as tax and fee cuts. Given the limited scope of further tax cut, the burden will lie on bonds. We expect the government will issue addition LG bond in as soon as the first quarter.