China’s foreign trade surprised to the upside in December. Exports rose +7.6% y/y in the last month of 2019, compared with consensus of +2.9%. Meanwhile, imports jumped +13.6% y/y, beating expectations of +9.6%. Both outbound and inbound shipment improved in December from a month ago. Exports in November contracted -1.9% y/y, while imports edged +0.3% higher. Trade surplus widened to US$46.8B in December, from US$ 37.9B a month ago. Strength in Chinese trade in last December was mainly driven by low base and frontloading due to early lunar New Year this year. We expect China’s trade would stabilize this year, growing with single digit given smooth US-China trade negotiations.

In December, exports the US contracted -14.6% y/y, recovering from -23% a month ago. Shipments to other developed countries also improved. For instance, exports to EU expanded +6.6%, following a decline of -3.8% in November. Exports to Japan contracted -3.4% in December, compared with a -7.9% contraction a month ago. Concerning developing economies, exports to ASEAN countries jumped +27.4% y/y in December. This marks a significant growth from +16.7% in November. Shipments to Brazil surged +71.1%, after gaining +12.8% in November

Growth in imports was mainly driven by commodity demand. Following contraction of -9.3% a month ago, China’s imports rallied +42.5%. We believe this was driven by demand for iron ore. Separately, the recovery of imports from Taiwan, Japan and Korea was mainly driven by rising demand of electronics and electrical products. Note also that China’s imports from the US expanded +7.8% y/y in December, from +2.7% a month ago. This is likely driven by the increase in purchase of US agricultural goods.

For 2019 as a whole, China’s exports climbed only by +0.5%. This was much weaker than the +9.9% growth in 2018. Key reasons for the moderation were US-China trade war and US growth slowdown. For the year ahead, exports are expected to grow slightly in 1Q19. This forecast is hinged on the assumption that US and China manage to sign the Phase I trade deal and the US removes some of the previously imposed trade tariff. 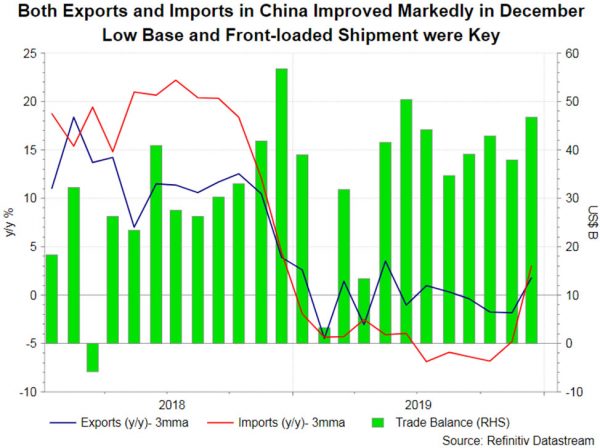