Canadian Dollar, Australian Dollar and Euro are the strongest major currencies today. Meanwhile, Swiss Franc, Yen and Dollar are the weakest one. The reason for the strength in Loonie is not exactly clear. But Canadian could be benefiting from report that US Treasury Secretary Steve Mnuchin urged President Donald Trump to exempt Canada from the steel and aluminum tariffs. Euro is clearly lifted by hawkish comments from ECB officials that raised of announcing the end of QE in next week’s meeting. meanwhile, Australian Dollar continues to stay firm after today’s GDP upside surprise.

ECB chief economist Peter Praet sounded upbeat in his speech today in general. He pointed out that the “main intersection” between growth and inflation formation lies in the labor market”. He said that “a look at the sectoral make-up of the most recent developments in the job market is encouraging”. PMIs continued to signal employment creation across sectors and countries. And, measures of labour market titaness show “upward trend” has steepened over the past year. Measures of slack also showed improvement.

And at the same time “there is growing evidence that labour market tightness is translating into a stronger pick-up in wage growth”. Annual wage growth rose to 1.9% in Q1, up from Q4’s 1.6%. The upsurge was due to sharp rise in 2.3% in negotiated wages in Germany. And rising wage pressures are starting to feed into producers prices too.

Praet added that “signals showing the convergence of inflation towards our aim have been improving, and both the underlying strength in the euro area economy and the fact that such strength is increasingly affecting wage formation supports our confidence that inflation will reach a level of below, but close to, 2% over the medium term. ”

Most importantly, Praet said “next week, the Governing Council will have to assess whether progress so far has been sufficient to warrant a gradual unwinding of our net purchases.” And, it will be a “judgement” call.

ECB governing council member Klass Knot also reiterated that the central bank should wind down the asset purchase program as soon as possible.

Markit economist Alex Gill said in the released that “the latest PMI data signalled a more positive month for the eurozone retail sector, with sales returning to growth on both a monthly and annual basis. In turn, this contributed to the sharpest round of job creation in the current 31-month sequence of hiring”.

However, he added that “the positive trends were lop-sided when looking at country data, however. The rise in monthly sales was driven by a sharp rise in Germany, though a slight increase was also recorded in France. Meanwhile, Germany was the only country to register a rise in year-on-year sales, while Italy recorded a marked decline.”

Germany, France and Britain seek US sanction exemptions in Iran

Reuters reported that Germany, France and Britain sent a letter to US Treasury Secretary and Secretary of State on June 4, requesting US sanction exemptions in EU companies in Iran.

The letter state that “as close allies, we expect that the extraterritorial effects of U.S. secondary sanctions will not be enforced on EU entities and individuals, and the United States will thus respect our political decisions.” EU expected exemptions on
pharmaceuticals, healthcare, energy, automotive, civil aviation, infrastructure and banking companies.

The ministers also warned that “an Iranian withdrawal from the (nuclear agreement) would further unsettle a region where additional conflicts would be disastrous.” And they emphasized that the 2015 JCoPA was “the best basis on which to engage Iran and address those concerns”.

Japan Prime Minister Shinzo Abe warned today that “no country benefits from retaliatory trade restrictions.” And, ahead of the G7 leaders summit on June 8-9, Abe said “my message is G7 should play a role in free and fair global economic development.”

Separately, Abe said that ahead of the Kim-Trump summit in Singapore on June 12, he will meet Trump to “coordinate in order to advance progress on the nuclear issue, missiles and – most importantly – the abductees issue.” A sticky point is that upon declaring peace in the Korean peninsula, UK could eventually have to reduce military forces in South Korea. And Japan’s constitution, diplomatic policies and national security policies all will have to be totally reviewed for the completely new situation.

Chief Economist for the ABS, Bruce Hockman said in release that “growth in exports accounted for half the growth in GDP, and reflected strength in exports of mining commodities.” Mining industry Gross Value Added grew 2.9% during the quarter. Production of coal, iron ore and liquefied natural gas showed strong increases.

Meanwhile, private non-financial corporations profits increased by 6.0%. Hockman added that “the rise in profits was consistent with the strong increase in mining exports coupled with a lift in the terms of trade this quarter.” 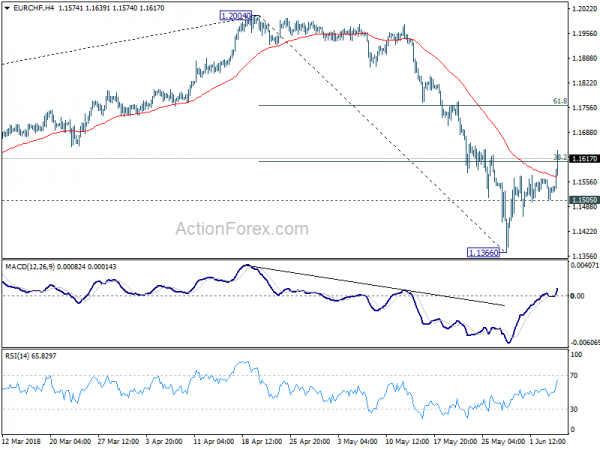 In the bigger picture, current development suggests solid rejection by prior SNB imposed floor at 1.2000. Considering bearish divergence condition in daily and weekly MACD, 1.2004 should be a medium term top. And price action from 1.2004 is correcting the up trend from 1.0629. Such correction is expected to extend for a while and therefore, we’re not anticipating a break of 1.2004 in near term. Another decline cannot be ruled out yet. But in that case, strong support should be seen at 1.1198 (2016 high), 61.8% retracement of 1.0629 to 1.2004 at 1.1154 to contain downside. 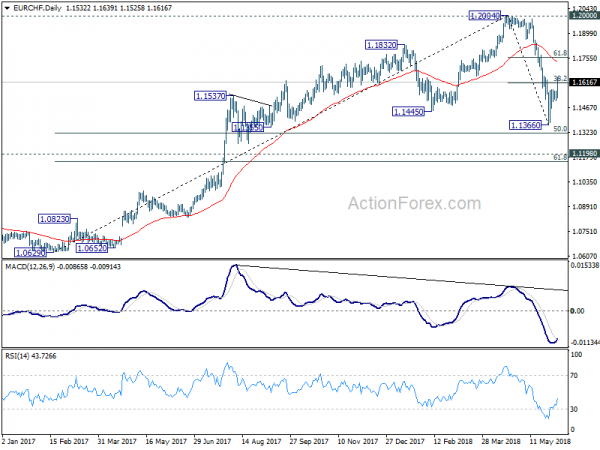