Markets Steady as Kim Meets Trump, UK Job and US CPI to Guide

The financial markets are steadily optimistic so far this week and that can be reflected in the rebound in German bund yield and US 10 year yield. Yen is trading broadly lower today, followed by the Swiss Franc. Australian, New Zealand and US Dollar are trading mildly higher. Eyes are on the summit between North Korea Leader Kim Jong-un and US President Donald Trump in Singapore in Asian session. The outcomes are positive so far as Kim said it’s a “good prelude for peace”.

One notable development in the currency markets is the break of 110.26 minor resistance in USD/JPY. It suggests resumption of recent rebound from 108.10 and further rise would be seen to 110.39 next. For now, USD/CHF is holding below 0.9911 minor resistance. EUR/USD is above 1.1713 minor support. There is no indication of completion of recent correction in Dollar yet. While FOMC economic projections to be released tomorrow is a key, markets will look into today’s US CPI for guidance first.

Sterling is relatively resilient so far despite yesterday’s data miss in industrial and manufacturing production. GBP/USD is holding on to 1.3347 minor support. EUR/GBP is also held below 0.8844 resistance. But the Pound would be vulnerable to another round of selloff today. UK job and wage data are important facts for BoE to decide whether to hike in August or not.

Canada House of Commons displayed rare political unity an passed a unanimous motion standing by the government on retaliation against US steel tariffs, and reject personal attack on Prime Minister Justin Trudeau. The motion is introduced by NDP’s Tracey Ramsey. The House “strongly opposes the illegitimate tariffs imposed by the United States government against Canadian steel and aluminum works”. And it “stands united in solidarity with the Government of Canada in its decision to impose retaliatory tariffs”. And it “rejects disparaging ad hominem statements by the US administration which do a disservice to bilateral relations and will fail to resolve this trade dispute”.

IMF managing director Christine Lagarde said yesterday that “the clouds on the horizon that we have signaled about six months ago are getting darker by the day, and I was going to say by the weekend”, referring to what Trump did to the G7. She added that the biggest and darkest cloud that we see is the deterioration in confidence that is prompted by (an) attempt to challenge the way in which trade has been conducted, in which relationships have been handled and in which multilateral organizations have been operating.”

WTO Director-General Roberto Azevedo also criticized the that “the US has been focusing much more on bilateral – unilateral even sometimes – measures, which is not something that is support of the rules-based trading system.” And, “they have been complaining about the system, they say that they want to improve the system, but we would expect a more constructive approach on their part.

Australia NAB Business confidence dropped to 6, no RBA hike till May 2019

Australia NAB business condition dropped -6 pts to 15 in My. Business confidence dropped -5 pts to 6. Both reversed the improves from March to April. NAB chief economist Alan Oster noted that despite easing, business conditions “remain robust” well above average across most states and industries. Though, there is a divergence seen as confidence is “highest in trend terms in Tasmania and Western Australia. But New South Wales and Victoria “lag the other states at below average levels”.

Oster added that the indicators continue to suggest a pickup in growth and unemployment rate would fall towards 5%. Pickup in wages remain key for RBA monetary policy. But a rate hike will not occur until May 2019. Oster said while the survey continues to point to a growing economy, strength in employment and a decline in the unemployment rate, these factors are yet to materialise in a significant pick-up in wages.”

UK job data will take center stage in European session. Wage growth is particularly important to watch. Germany will release ZEW economic sentiment. Later in the day, US CPI will catch most attention.

Break of 110.26 minor resistance suggests that rebound from 108.10 has resumed. Intraday bias in USD/JPY is turned back to the upside for 111.39 resistance first. Decisive break there will resume the whole rebound from 104.62. On the downside, break of 109.18 will extend the consolidation from 111.39 with another decline towards 108.10 support. 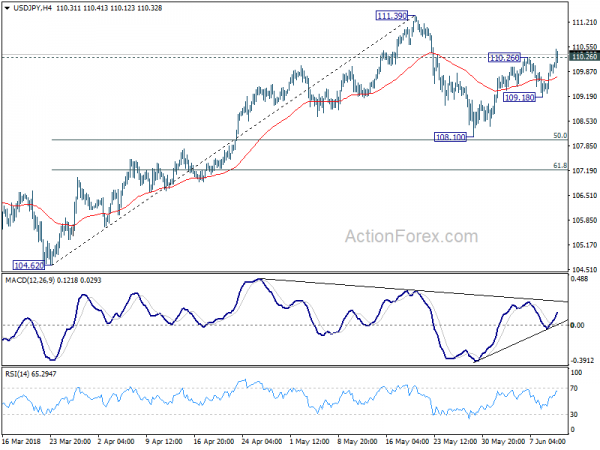 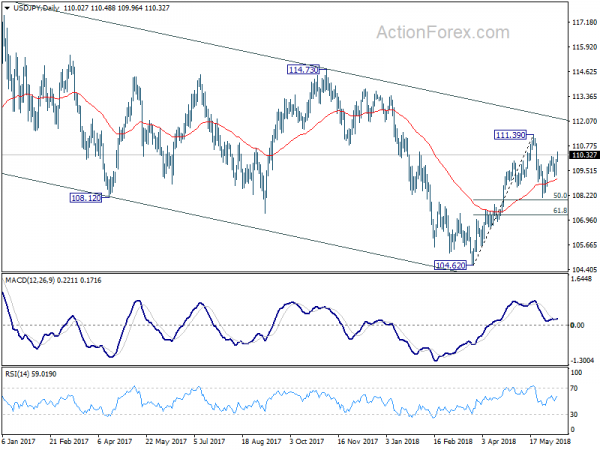