The BoE triggered rebound in Sterling was relatively brief. Risk aversion quickly regained the spotlight in the markets. DOW extended its losing streak for the eight day and closed down -196.10 pts or -0.80% at 24461.70. S&P 500 and NASDAQ were down -0.63% and -0.88% respectively. Asian markets follow, with Nikkei losing -1% at the time of writing. Yen retreats mildly today but remains the second strongest one for the week, next to Swiss Franc. Gold extended recent slump to as low as 1261.52 yesterday and 1260 looks vulnerable. WTI crude oil continues to struggle in range ahead of meeting of oil producers on production raise.

Technically, USD/CHF’s dip yesterday puts 0.9894 minor support back into focus. Break there could resume recent correction from 1.0056 through 0.9787 low before completion. USD/JPY is also heading back to 109.54 temporary low and break could finally build up some downside momentum for 108.10 support. USD/CAD could be an interesting one to watch too as recent rally is losing momentum despite hitting 1.3334. A break of 1.3268 minor support, triggered by oil or Canadian data, could mark short term topping and bring deeper pull back.

The BoE triggered rebound in Sterling yesterday was initially rather strong, but lacked follow through buying. GBP/USD is kept well below key near term resistance at 1.3471. EUR/GBP is still hovering around mid-point of range of 0.8693/8844. Even GBP/JPY is held below 146.46 minor support. For the week, Sterling is staying in red against Dollar, Euro, Swiss and Yen. It’s just up against the risk aversion hit Canadian, Australian and New Zealand Dollar.

Yesterday’s more hawkish than expected BoE announcement just revived the chance of an August hike. That was indeed the base case as presented in the May Inflation Report. Remember that during the most Sterling bullish time earlier this year, markets were expecting a hike in May and speculating for another one in November. The BoE announce just solidify the case for a hike in the second half of the year, that is either in August or November, possibly in August. And it sort of ruled out the possibility of BoE standing pat for the rest of the year.

Minneapolis Fed President Neel Kashkari expressed his doubts on the long term effect of Trump’s USD 1.5T package of corporate and individual tax cuts. In an event at African Development Center of Minnesota, he said “we know if you cut taxes on the margin that should boost economic growth in the short term.” However, “the question is when that short term is over, does it actually lead to longer-term, higher sustained economic growth? That’s unclear right now.”

He also points to the information he got from businesses. Kashkari said while business leaders “are more optimistic than I had expected,” they are also saying that lower tax rates have not led them to make new investments, at least not yet. He added “I am asking businesses ‘are you actually investing more?’ And so far the answer that I’ve heard is ‘we’re waiting to see.'”

Released from Japan, all items CPI rose to 0.7% yoy in May, up from 0.6% yoy. Core CPI, less fresh food, was unchanged at 0.7% yoy. Core core CPI, less fresh food and energy even slowed to 0.3% yoy, down from 0.4% yoy. The data highlighted BoJ’s inability to lift inflation and inflation expectation even with the ultra-loose monetary policy. And the central bank is still a long way from stimulus exit.

PMI manufacturing rose to 53.1 in June, up from 52.8, beat expectation of 52.6. Joe Hayes, Economist at IHS Markit note in the release that “the final PMI reading of the second quarter revealed a quickened pace of growth across the Japanese manufacturing economy. “The sector has sustained a relatively solid upward trend across 2018,” and “there appears to be further legs in the manufacturing growth cycle.”

Oil price in range ahead of pivotal OPEC meeting

Oil price is staying in range between 63.6/66.9 as markets await the pivotal meeting in Austria. Delegations of OPEC and non-OPEC oil producing countries are meeting today in Vienna. The producers are trying to reach a consensus on easing the output cap, that is raising production, to cool oil prices.

Saudi Arabia’s Energy Minister Khalid Al-Falih, the defacto leader of OPEC, said yesterday that he was “optimistic” on a deal as there was a “spirit of cooperation” among the group. And they would discuss how to raise production by around 1 million barrels per day.

The United Arab Emirates’ minister of energy and industry, and OPEC president, Suhail Al- Mazrouei emphasized that OPEC is “not a political organization” but a “commercial organization”. Iraq’s Oil Minister Jabbar Ali al-Luaibi also said he’s “confident that we will reach some sort of agreement”.

However, Iran, Iraq and Venezuela are known to oppose the relaxation of production cut. Iranian Oil Minister Bijan Zanganeh said he doubted OPEC could reach a deal this week and he was feeling “very good” about the current production levels.

Russian Energy Minister Alexander Novak warned that “Oil demand usually grows at the steepest pace in the third quarter … We could face a deficit if we don’t take measures.” And, “this could lead to market overheating.” Russia is pushing up to 1.5 million barrels per day of output raise, OPEC and non-OPEC countries together.

Eurozone PMIs will be the major focus in European session. Canada will release retail sales in CPI later in the day. US will release Markit PMIs too. 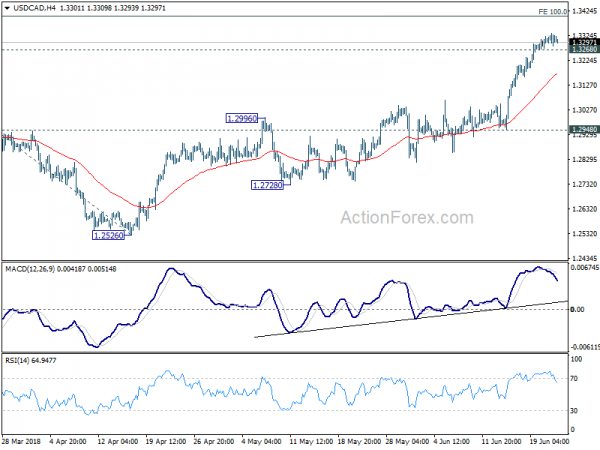 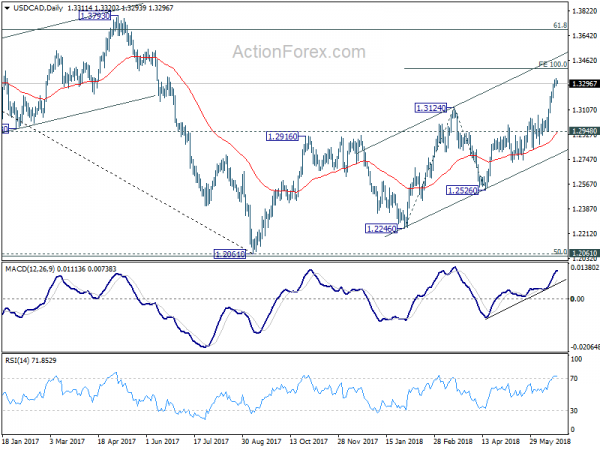