Dollar trades mixed in early US session with notable weakness against Euro and Swiss Franc. The forex markets are relatively steady elsewhere, with Aussie and Loonie trading to recover while yen extends its pull back. US initial jobless claims rose 10k to 244k in the week ended April 15, slightly above expectation of 241k. Continuing claims dropped -49k to 1.98m in the week ended April 8, lowest since April 2000. Philly Fed survey dropped to 22.0 in April, down from 32.8, below expectation of 25.6. In other markets, US futures point to a mildly higher open and stocks could pare back some of yesterday’s steep loss. Gold is hovering around 1280 while crude oil is heading to test 50 psychological level.

Fed’s Beige Book: Modest to moderate expansion in all districts

Released yesterday, Fed’s latest Beige Book indicated that economic activity increased in each of the twelve Federal Reserve Districts between mid-February and the end of March. The the pace of expansion was "equally split between modest and moderate". On the labor market situation, the report noted that it "remained tight, and employers in most Districts had more difficulty filling low-skilled positions, although labor demand was stronger for higher skilled workers". It added that "modest wage increases broadened" with "bigger increases for workers with skills that are in short supply". A larger number of firms noted "higher turnover rates and more difficulty retaining workers". Yet, the wage pressure remained modest and has not yet significantly passed to selling prices. As the report suggested, "input prices generally increased at a modest rate and outpaced gains in selling prices, which rose only slightly".

UK PM May got parliament backing for snap election

UK Prime Minster Theresa May won backing from the parliament for the snap election on June 8. The bill was passed with overwhelming 522 to 13 votes. The Parliament will now formally be dissolved on May 3. May said that she won’t be doing TV debates as she believes in "campaigns where politicians actually go out and about and meet with voters. And she wants the election to focus on Brexit and gives her "the strongest possible hand" for negotiation with EU. She also noted that the election is "a choice between strong and stable leadership under the Conservatives or weak and unstable coalition of chaos led by Jeremy Corbyn."

New Zealand CPI rose 1.0% qoq in Q1, up from prior quarter’s 0.4% qoq, and beat expectation of 0.8% qoq. Kiwi jumped briefly on talk that RBNZ is falling behind the curve. And the central bank could be forced to raise interest rates. Overnight index swaps are pricing in 80% chance of a rate hike within the coming 12 months.

EUR/USD’s rise from 1.0569 continues today and reaches as high as 1.0777 so far. Intraday bias remains on the upside for 1.0905 resistance and above. Nonetheless, choppy rise from 1.0339 is still seen as a correction. Hence, we’ll pay attention to topping signal above 1.0905 again, as we’d expect larger down trend to resume later. On the downside, break of 1.0676 minor support will turn intraday bias back to the downside for 1.0569 instead. 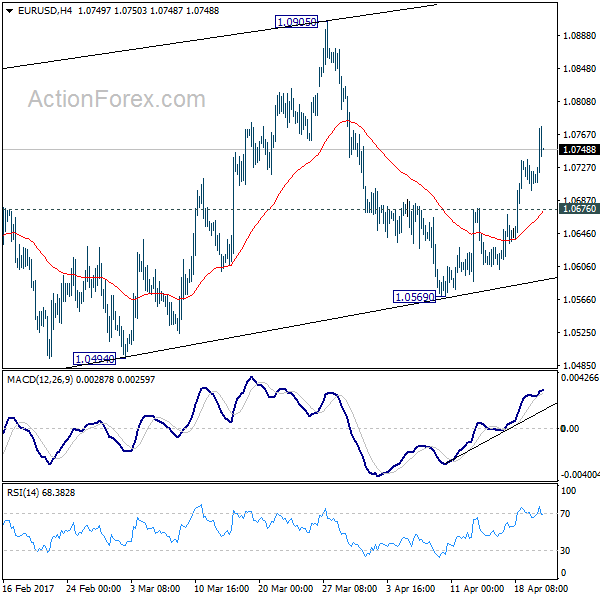 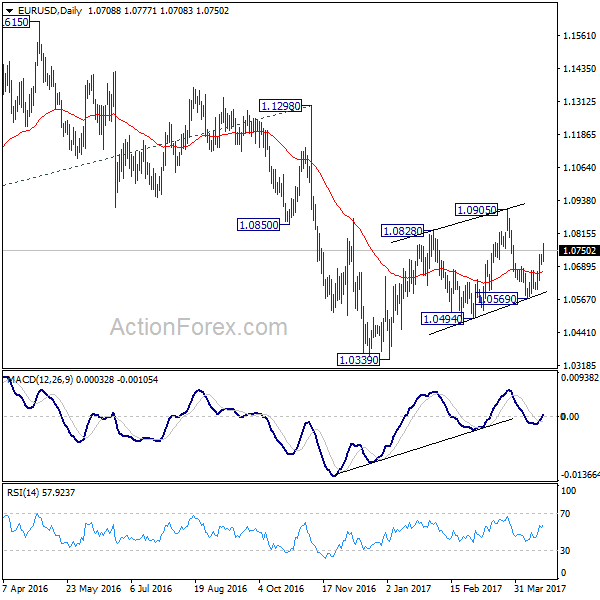