Yen is trading slightly higher in Asian session today as the markets are quietly soft. Australian Dollar and Canadian Dollar are the weakest ones. At the time of writing, Nikkei is down -1.0%, HK HSI is down -0.9% while China SSE is down -0.9% too. Some attention will be on Chinese stocks, ahead of tariffs implementation on July 6 with the US. The SSE, currently at 2734, could have a take on the now important 2700 psychological level. The Chinese could step up its verbal or even actual intervention should SSE touches 2700.

In the currency markets, Yen is so far the strongest one for the week but is limited below prior week’s high. Sterling was lifted by solid PMIs this week and is following as the second strongest. Meanwhile, Australia Dollar is trading as the weakest one as rebound attempt falters. It’s followed by Swiss Franc as the second weakest for the week.

Technically, the forex markets are generally staying in consolidative mode. Even though EUR/GBP had a steep decline yesterday, it’s holding above 0.8796 minor support so far, thus maintained near term bullishness. USD/CAD attempted to extend the pull back from 1.3385 but lost momentum ahead well ahead of 1.3067 support. EUR/USD and GBP/USD are staying in range above 1.1507 and 1.3048 respectively.

The Financial Times reported that EU is considering negotiations with the world’s largest car exporters to prevent and all-out trade war. The talks would involve the US, South Korea and Japan, aiming at a so called “plurilateral agreement” to reduce tariffs to an agreed level for a specified set of products. In such setting, the deal could be struck without involving all of WTO member nations.

European Commission President Jean-Claude Juncker is believed to bring the proposal to the US for his meeting with Trump later in July. German Chancellor Angela Merkel also told the German parliament yesterday that Juncker will travel to the US and “submit proposals setting out what we can do.” Merkel urged that it’s worth trying to defuse this conflict, so that it doesn’t turn into a real war”. But she also emphasized that “we need two parties for that to happen.”

Separately, it’s also reported that Trump would agree to end the trade dispute on car if both EU and the US would drop all auto tariffs. German newspaper Handelsblatt reported that US ambassador to Germany Richard Grenell had met with executives from Daimler, Volkswagen and BMW to brief the idea.

BoJ board member Takako Masai said in a speech that “outcome of protectionist moves in the United States as the downside risk that is of greatest concern”. In the short term, “growing uncertainty over U.S. trade policy will likely lead to a sharp rise in volatility in global financial markets”. This could lead to “adverse effects on the sentiment of firms and households.”

In the medium-to-long term, “if such protectionist moves were to increase globally, this may significantly affect the business strategies of global firms, and the subsequent impact on the capital flow of trade and investment cannot be ignored. ” Masai added he will closely monitor “whether the protectionist moves entail the risk of causing any imbalances in the global capital allocation.”

RBA Head of Economic Analysis Department Alexandra Heath said in a speech today that recent data have been positive. She pointed to picked up in growth to 3% over the year to March quarter. And, the central forecasts is for growth to be at or above 3% over 2018 and 2019. With that, there will be a “further gradual reduction” in spare capacity and a “gradual increase in wage and inflationary pressures”.

The improvement came as the drag from falling mining investments has diminished. According to Heath, such negative effect form mining will also be done by early next year. Public sector also played a part in the contribution. There was also significant increase in non-mining investment. And, Heath added that “we are now more confident about a sustainable pick-up in non-mining business investment.”

Germany factory orders, Eurozone retail PMI and Swiss CPI will be featured in European session. But the main events are in the US. ADP employment, jobless claims and ISM services will be released. Also, FOMC minutes would reveal the discussions on lifting the forecast to four rate hikes this year. 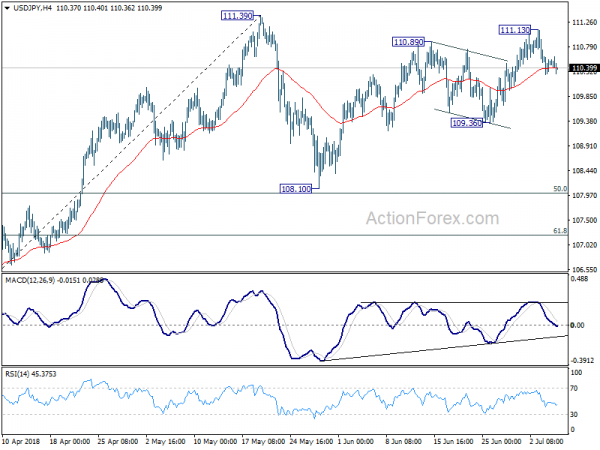 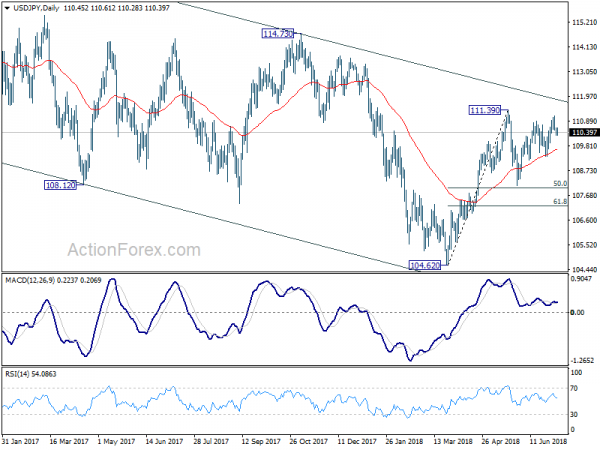