Dollar suffers fresh selling entering into US session, in particular against Euro and Swiss Franc. Two former aides of Trump, campaign manager  Paul Manafort and personal lawyer Michael Cohen are found guilty on a range of charges. More importantly, Cohen’s attorney Lanny Davis said in a statement that Cohen “stood up and testified under oath that Donald Trump directed him to commit a crime by making payments to two women for the principal purpose of influencing an election.” Additionally, Davis told MSNBC that Cohen has knowledge, regarding Trump, about the possibility of a “conspiracy to collude and corrupt the American democracy system in the 2016 election”. Davis said Cohen would be willing to tell Mueller.

At the time of writing, Dollar is trading as the second weakest one, just better than Australian Dollar for the day. Euro and Swiss Franc are the strongest ones, followed by Canadian and New Zealand Dollar. US-China trade talk will resume in Washington today. But given that the involved officials are rather low leveled, there is no much anticipation for the meeting. FOMC minutes will also be a focus. But that was a meeting where Fed kept policy unchanged and the statement revealed nothing new. We are not expecting anything drastic from the today’s minutes release. Fed is in no doubt on track for two more rate hikes this year.

Released from Canada, release sales dropped -0.2% mom in June, ex-auto sales dropped -0.1% mom. The data are not too far from market expectations. The Canadian Dollar will look into the NAFTA meeting between the US and Mexico today. There are rumors that a bilateral deal could be announced as soon as on Thursday. But at this year, there is no concrete information yet. Canada is still waiting for the door to open to rejoin the supposed trilateral negotiations.

German Chancellor Angela Merkel expressed her agreements Foreign Minister Heiko Maas regarding the ideas is his recent articles. There Maas called for more unity in Europe to counter US policies. Merkel’s spokesman Steffen Seibert said during a regular government news conference that, “the article by minister Maas conveyed much of what constitutes the common stance of the government towards the United States.” Seibert added that Maas :presented observations that are preoccupying the government – namely stronger European unity and the question of Europe taking on more responsibility. There is a lot of agreement there.”

In the article in  Handelsblatt business daily titled “Making plans for a new world order“, Maas said “Europe’s relationship with the US was changing even before Donald Trump and his provocative Tweets came along.” An Germany now sees a historic opportunity to redefine EU’s role. Mass urged “Europe United”, meaning “. Europe is building on the rule of law, respect for the weaker, and our experiences that show that international cooperation is not a zero-sum game.” He added that “it is in our own interest to strengthen the European part of the North Atlantic Alliance. Not because Donald Trump is always setting new percentage targets, but because we can no longer rely on Washington to the same extent.

Also, Maas emphasized the need to expose “fake news”. For example, “if the current account balance of Europe and the US includes more than just trade in goods, then it is not the US that has a deficit, it’s Europe.” Also, ” as Europeans, we have made it clear to the Americans that we consider the withdrawal from the nuclear agreement with Iran to be a mistake.” Maas suggested that it is “essential that we strengthen European autonomy by establishing payment channels independent of the US, a European monetary fund and an independent SWIFT [payments] system.”

Additionally, Mass said “we are striving for a multilateral alliance, a network of partners who, like us, are committed to sticking to the rules and to fair competition.” And he has met with Japan, Canada and South Korea for an alliance already and more are to follow. He is proposing an “an association of states convinced of the benefits of multilateralism, who believe in international cooperation and the rule of the law”, “alliance that supports and enhances a global, multilateral order”.

RBA Deputy Governor Guy Debelle discussed “Low Inflation” in a speech today. In short, he attributed low inflation to “include increased competition in the retail sector, historically low rental growth, the slow pace of wages growth and developments in some administered prices”. Utility prices boosted inflation for “a number of years” but are expected to reduce in the period ahead.

Debelle reiterated RBA’s forecast of a temporarily slow down in inflation in Q3. But beyond the September quarter, “we continue to expect inflation to be around 2¼ per cent over the next couple of years as above-trend GDP growth reduces spare capacity in the labour market and there is an associated pick-up in wages growth.” Most of the others forces are expected to abut even though “there is uncertainty about how much longer they will persist”. 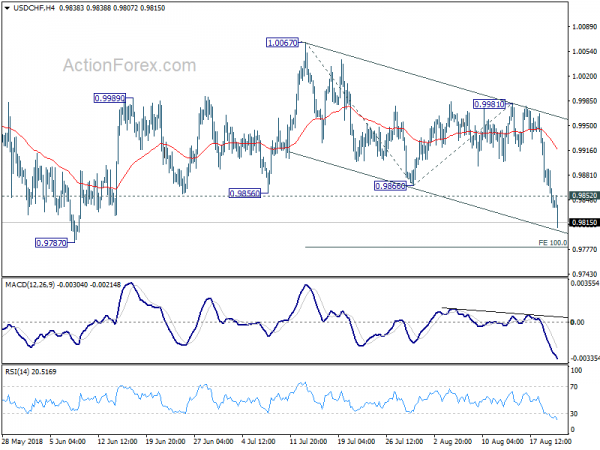 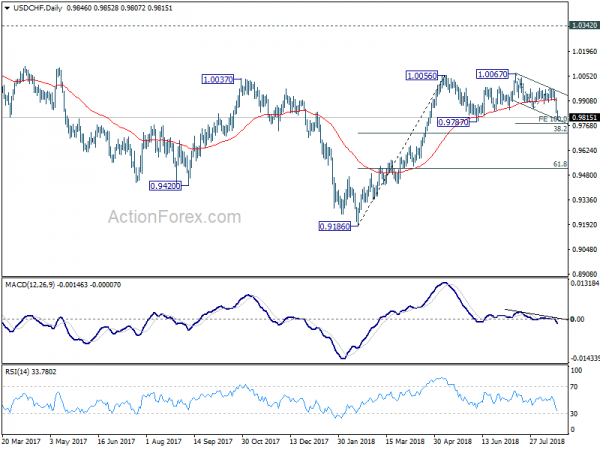