US stocks extended the record run overnight as Trump trade remained in force. DJIA closed up 142.79 pts or 0.70% at 20412.16. S&P 500 rose 12.15 pts, or 0.52% to end at 2328.25. NASDAQ gained 29.83 pts or 0.52% to 5763.96. All three indices closed at record highs. Treasury yields also increased mildly but stayed in familiar range. 10 year yield rose 0.025 to end at 2.434. Dollar followed higher with the index hitting 101.11 and breached 101.02 resistance. But there is no sustainable momentum above this resistance yet. In the currency markets, Yen remains the weakest major currency on risk appetite. Euro follows as the second weakest on worries over political situations in Europe. The economic calendar is very busy today but main focus will be on Fed chair Janet Yellen’s semiannual testimony to the Senate.

Fed fund futures are pricing in 17.7% chance of a March Fed hike and 66.1% chance by June. Markets will look into Yellen’s speech on any change on Fed’s forecasts of three rate hike this year. Some might also want to get hints on chance of March hike. However, based on uncertainties over the fiscal policies Trump would adopt, it’s likely that Yellen would sound non-committal. Meanwhile, there are also talks that Fed’s Yellen’s speech doesn’t carry the same significance as before. Yellen’s stance could be irrelevant as US president Donald Trump would appoint three member of Fed. And that would reshape the policy path.

Dallas Fed president Rob Kaplan said yesterday that Fed should be "moving sooner rather than later will make it more likely that future removals of accommodation can be done gradually – that is, reduce the likelihood that the Fed will get ‘behind the curve’ and feel the need to remove accommodation more rapidly." He argued that keep rates on hold at current low level for too long could create distortions in investment and hiring.

On the data front, Australia business confidence rose to 10 in January. China CPI accelerated to 2.5% yoy in January while PPI also accelerated to 6.9% yoy. Looking ahead in European session, Eurozone, Germany and Italy GDP will be featured together with German ZEW economic sentiment. Swiss and UK will both release CPI and PPI. Later in the day, US will release PPI.

EUR/AUD’s decline continues today and reaches as low as 1.3808 so far. Intraday bias remains on the downside for 1.3671 key support level next. At this point, we’d still expect strong support around 1.3671 to bring rebound. On the upside, above 1.3888 minor resistance will turn bias neutral first. Firm break of 1.4025 support turned resistance will indicate short term bottoming and turn focus back to 1.4289 resistance.

In the bigger picture, price actions from 1.6587 medium term top are viewed as a corrective pattern. Deeper fall could be seen but, we’d expect strong support above 1.3671 to contain downside and bring rebound. Up trend from 1.1602 should not be finished and will resume later. Break of 1.4721 resistance will indicate completion of such correction and outlook bullish for retesting 1.6587 high. However, sustained break of 1.3671 will invalidate our bullish view and would turn focus back to 1.1602 long term bottom. 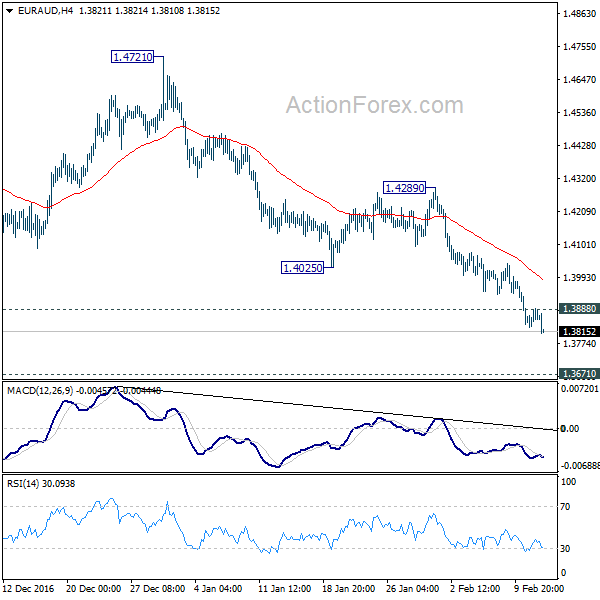 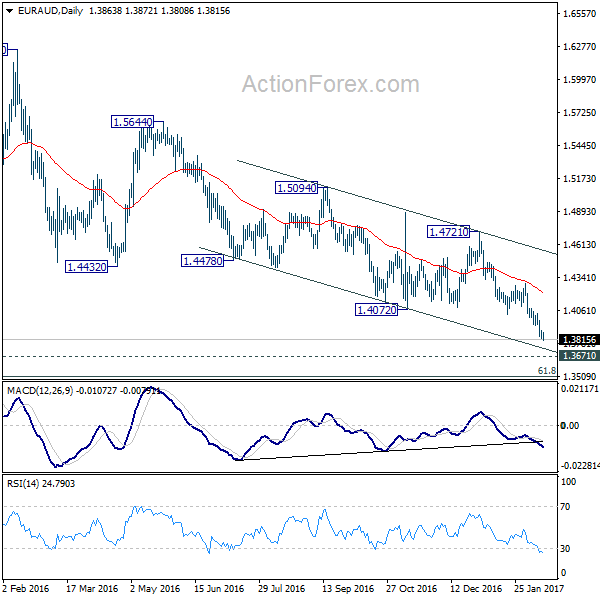