Dollar is back in control today and it’s trading as the second strongest one in early US session, next to Sterling. Stronger than expected ADP employment report, which showed 230k growth in September, gives the greenback an extra push. Sterling is rather steady as UK Prime Minister Theresa May’s Conservative Party conference speech is ignored. At least, it isn’t a disaster like last year. Euro’s recovery lose some momentum as the lift from Italian budget rumor fades. Nonetheless, the common currency is still way better than Australian and Zealand Dollar, which are the worst performing one today.

Technically, USD/CHF takes out 0.9866 resistance rather firmly today. Rebound from 0.9541 could now be on course for retesting 1.0067 resistance. AUD/USD is pressing 0.7143 support. Break will be a strong signal of larger down trend resumption through 0.7084 low.

Italy Economy Minister Giovanni Tria said today that the while the budget deficit will increased compared with previous forecast in 2019, “there will be a gradual reduction in the following years”. His comments echo reports that the populist government has revised their original plan after strong pressure from the EU.

Originally, the plan was to have budget deficit target at 2.4% of GDP in the three years from 2019. But according to unnamed government sources, the plan now is to keep 2.4% in 2019, but lower to 2.2% in 2020 and then 2% in 2021. Prime Minister Giuseppe Conte is due to meet with key ministers today. The details could then be defined after the meeting.

But even in case of this watered down version, Italy still risks downgrade by credit rating agencies. More in Italy Rating Downgrade Inevitable Although Government Might Water Down Stimulus.

Chris Williamson, Chief Business Economist at IHS Markit noted that the survey data are equivalent to 0.5% GDP growth in Q3. However, he warned that Q4 is “unlikely to see such robust growth, as recent months have seen a clear loss of momentum in terms of both output and new order gains.” In particular, “the most worrying signs come from exports”.

UK PMI services dropped to 53.9 in September, down from 54.3 and matched expectations. The key points are “growth of business activity eases only slightly since August”, “job creation edges up to seven-month high”, “higher fuel prices lead to sharp rise in input costs”.

Chris Williamson, Chief Business Economist at IHS Markit said the released that the ” service sector continued to report solid steady business growth”. And, along with other survey results, the UK economy could had expanded by just under 0.4% in Q3. Though, “Brexit worries continue to dominate the outlook”, and “clarity on Brexit arrangements is therefore needed as soon as possible to help sustain growth.”

Chicago Fed President Charles Evans said the US economy is doing “extremely well”, the “fundamentals are strong, the labor market is doing terrific.” He added that “I spent quite a long time indicating that I think inflation needs to get up to 2 percent, and here we are.” Evans also noted “by setting the policy rate just a little above neutral, that will continue to keep things going for quite some time” referring to the “very well” state the economy is in.

Though, he also indicated that “Long-term inflation expectations are now, in my opinion, a little bit too low.” Therefore, “we don’t have to raise the funds rate as restrictively as we may have in the past.”. And, “if the outlook continues to be as good as it is, at a slightly restrictive level and then hold there for quite some time until we begin to see signs that we need to make an adjustment.”

USD/CHF’s extends today by taking out 0.9866 cluster resistance and hits as high as 0.9889 so far. Intraday bias is back on the upside. Sustained trading above 0.9866 will pave the way to retest 1.0067 high. On the downside, though, break of 0.9822 minor support will indicate short term topping and bring lengthier consolidations, before staging another rally. 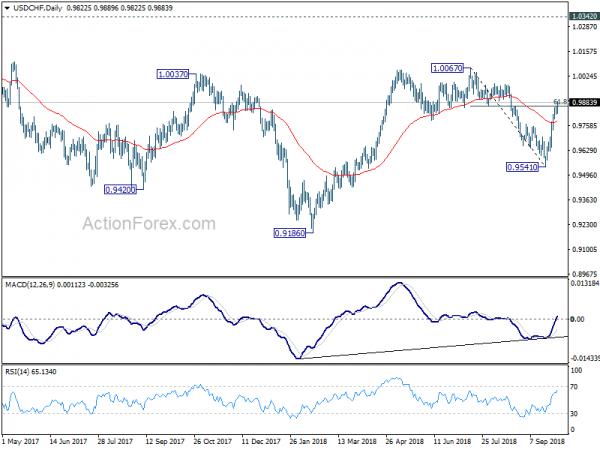