In an originally quiet holiday trading day, Sterling surges broadly as UK and EU agreed on the declaration on future relationship. The move, while strong, is relatively limited at this point. There seems to be some hesitation for Sterling bulls. They’d probably prefer to wait and see how the cabinet would respond to the declaration first. And of course, more resignations from the Cabinet would shake up the picture again. At this point, Euro is follow the Pound as the second strongest, and then Canadian Dollar. New Zealand and Australian Dollar are the weakest one for today, followed by Swiss Franc.

Technically, Sterling pairs will not catch most attention. Break of 0.8824 minor support in EUR/GBP will indicate rejection by 0.8939 resistance. And in that case, deeper fall would be seen back to 0.8655 support. GBP/JPY is also having focus back on 145.99 minor resistance. Break will indicate completion of pull back from 149.48 and GBP/JPY would head back towards 149.70 key resistance. GBP/USD’s break of 4 hour 55 EMA could now bring stronger rise back to 1.3071 resistance and above.

Sterling surges broadly on news that UK and EU have agreed on the draft political declaration on future relationship. It’s reported EU and UK “agree to develop an ambitious, wide-ranging and balanced economic partnership.” And “this partnership will be comprehensive, encompassing a free trade area as well as wider sectoral cooperation … will be underpinned by provisions ensuring a level playing field.” Also, the relationship would respect “the integrity of the Union’s Single Market and the Customs Union as well as the United Kingdom’s internal market, and recognize the development of an independent trade policy by the United Kingdom beyond this economic partnership.”

UK Prime Minister Theresa May hailed the draft declaration of future relationship with the EU as she spoke to reporters in Downing Street. She said , “The British people want this to be settled, they want a good deal that sets us on course for a brighter future … That deal is within our grasp and I am determined to deliver it.”

She added “The agreement we’ve reached is between the UK and the European Commission. It is now up to the 27 leaders of the other EU member states to examine this agreement in the days leading up to the special EU council meeting on Sunday.”

Regarding Gibraltar, May is confidence after speaking to Spanish Prime Minister Pedro Sanchez. She added “I am confident that on Sunday we’ll be able to agree a deal that delivers for the whole UK family, including Gibraltar.”

In the accounts of Oct 24-25 monetary policy meeting minutes, ECB acknowledged that “recent data and survey results had been generally somewhat weaker than expected”. However, the accounts also noted that incoming data were “still considered consistent with an ongoing broad-based expansion of the euro area economy” as embodied in September staff projections. The weaker growth momentum in 2018 “pointed to an economy that was growing more in line with potential”.

Nevertheless, the accounts also noted that weaker growth pattern in H2 “would have a mechanical impact, via the carry-over effect, on the estimate for annual growth in 2019”. Little information was currently available for Q4. “December 2018 Eurosystem staff projections, which would be available at the Governing Council’s next monetary policy meeting, would provide an occasion for a more in-depth assessment.”

On external risks ECB policymakers “considered that the uncertainties related to global factors remained prominent, and the risks related to the external environment were assessed to be tilted to the downside.” Risks include “rising protectionism, vulnerabilities in emerging markets and financial market volatility.” Also, the account noted that the limited impact from trade tensions was possible because “an adverse impact from trade tensions on more open economies was being offset by the presently more buoyant imports, particularly in the United States.”

On inflation, ECB policymakers consider “medium-term outlook for inflation, as contained in the September 2018 ECB staff projections, had been broadly confirmed.” The disappointing development in core inflation was “mainly due to services prices”. And, “it was recalled that there were a number of special factors underlying services price developments, which were mainly related to administered prices. An increase in underlying inflation for the euro area was to be expected when these base effects disappeared.

Overall, “members widely agreed that patience, prudence and persistence with regard to monetary policy remained warranted”.

BoJ is sometimes described as doing “stealth tapering” in slowing down its asset purchases. But Governor Haruhiko Kuroda told the parliament that the slowdown in purchases is different from Fed’s tapering.

He said “the Fed’s tapering is conducted intentionally and in several stages, as part of a normalization of monetary policy.” However, “the slowdown in our government bond buying is different from the Fed’s tapering”.

Also Kuroda reiterated the message that there is no need to take additional easing. Instead, BoJ would maintain the current program patiently as it takes time to lift inflation to target.

GBP/USD’s strong rally today indicates that rebound from 1.2773 has resumed. And the development argues that consolidation pattern from 1.2661 is staring another rising leg. Intraday bias is back on the upside for 1.3071 resistance first. But overall, upside should be limited by 1.3316 fibonacci level to bring down trend resumption eventually. On the downside, below 1.2764 minor support will turn bias back to the downside for 1.2661. Firm break there will resume the larger down trend from 1.4376. 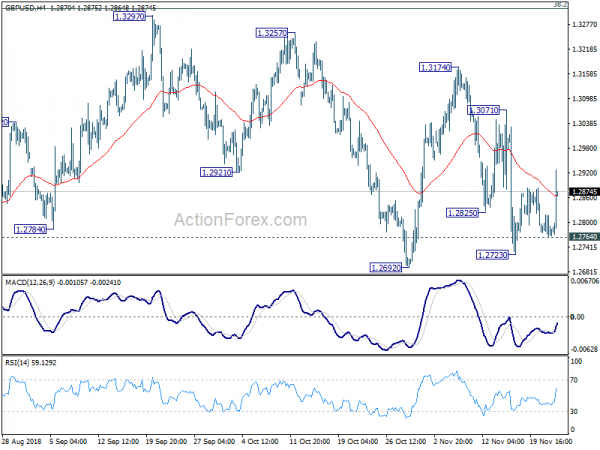 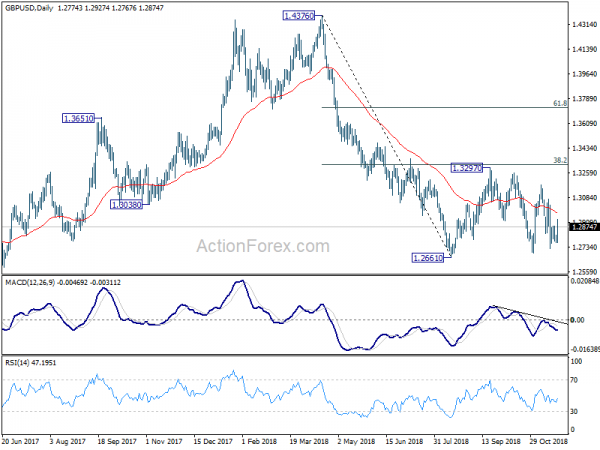