The forex markets are in a rather mixed mode this week so far, except that clear strength is seen in USD/JPY. Euro’s rebound yesterday was rather brief as Italy eventually decided to stick with its 2019 budget plan despite rumors of some adjustments. Sterling did get any sustainable boost from the Brexit deal. Instead, Dollar was apparently lifted by rebound in US stocks and mild recovery in treasury yields. Yen is thus being pressured for the same reasons. Nonetheless, no follow through movements are seen yet.

Italy to stick with 2019 budget for now, wait for technical analysis of the plan

Italy decided to stick with their 2019 budget after meeting between Prime Minister Giuseppe Conte and his two deputies, Matteo Salvini and Luigi Di Maio. In a joint statement, the three said that “the objectives that have already been fixed are confirmed.” Also, “as far as the on-going discussions with European institutions are concerned, we agreed to wait for the technical analysis of the proposed reforms which have the most important social impact to quantify precisely the cost.”

Meanwhile, it’s reported that they’re still flexible in adjusting the details of the plan so as to avoid disciplinary actions by the European Commission. For example, the so called citizen’s income plan could be delayed for a month or two which could save billions.

ECB President Mario Draghi told the ECON committee of the European Parliament today that data since September have been “weaker than expected”. And, the “loss in growth momentum mainly reflects weaker trade growth, but also some country and sector-specific factors.”

But he tried to talk down the slowdown as he said “A gradual slowdown is normal as expansions mature and growth converges towards its long-run potential.” Also, “some of the slowdown may also be temporary.” He maintained that “underlying drivers of domestic demand remain in place.” On prices, Draghi reiterated that “recent developments confirm the Governing Council’s earlier assessments of the medium-term inflation outlook.”

And ECB therefore “continues to anticipate that, subject to incoming data confirming our medium-term inflation outlook, net asset purchases will come to an end in December 2018.” But he also emphasized that “prevailing uncertainties still call for patience, prudence and persistence in calibrating our monetary policy stance.” And, “significant degree of monetary policy stimulus will be maintained, even after the end of net asset purchases.”

The UK Parliament is set to vote on the Brexit withdrawal agreement on December 11. Prime Minister Theresa May will start her nationwide tour today to secure the vote. Northern Ireland and Wales are her destinations today.

For Norther Ireland, May said in a statement on her visit that “having been told by the EU that we would need to split the UK in two, we are leaving as one United Kingdom.” And, “my deal delivers for every corner of the UK and I will work hard to strengthen the bonds that unite us as we look ahead to our future outside of the EU.”

May is also expected to highlight the benefits of her deal for businesses and said it has support from manufacturers who “need to be able to trade freely across the border with Ireland and have unfettered access to the rest of the United Kingdom’s market”.

Without knowing the details, Trump questioned if the Brexit deal with EU with hamper trade with the US. But UK PM May’s office quickly clarified and corrected Trump’s claim.

Trump said to reporters outside the White House that “I think we have to take a look seriously whether or not the UK is allowed to trade.” And, he added, “because right now if you look at the deal, they may not be able to trade with us.”

May’s office then said “the political declaration we have agreed with the EU is very clear we will have an independent trade policy so that the UK can sign trade deals with countries around the world — including with the US.” And, “we have already been laying the groundwork for an ambitious agreement with the US through our joint working groups, which have met five times so far.”

Trump highly unlikely to hold off 25% tariffs on $200B Chinese goods, threaten another $267B

In an interview with the WSJ, Trump said it was “highly unlikely” for him to hold off on raising tariffs on USD 200B in Chinese goods from 10% to 25% on January. We went further to threaten China for more tariffs if they cannot make a deal.

Trump said, “the only deal would be China has to open up their country to competition from the United States”. And, “as far as other countries are concerned, that’s up to them.”

Then Trump warned “If we don’t make a deal, then I’m going to put the $267 billion additional on”.

WTO’s World Trade Outlook indicator dropped notably from 100.3 to 98.6 according to data released today. That’s the lowest level since October 2016, with declines in all component indices. WTO said in the release that it signals trade growth in the coming months is “expected to be below-trend”.

WTO said that “the continued moderation in the overall WTOI index was driven by the steady decline in the export orders index (96.6), which remains below trend and is approaching the weakest point recorded in 2012 during the eurozone crisis”. And, “The latest results are consistent with the WTO’s downgraded outlook for global trade issued in September amid escalating trade tensions and tighter credit conditions in important markets. The revised forecast anticipated trade expansion to slow to 3.9% in 2018 and 3.7% in 2019 from 4.7% in 2017.”

Later in the day, UK will release CBI reported sales. US will release house price indices and consumer confidence. 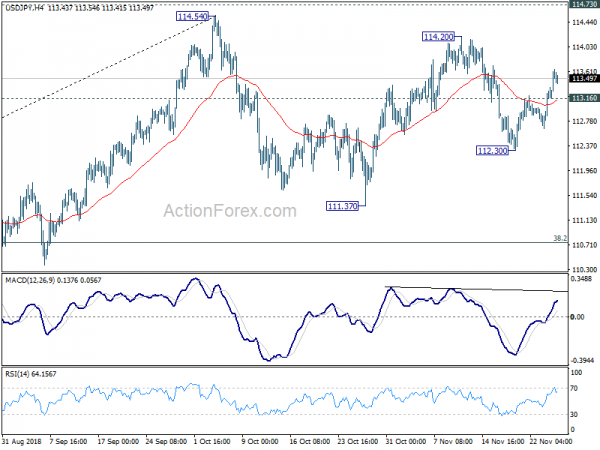 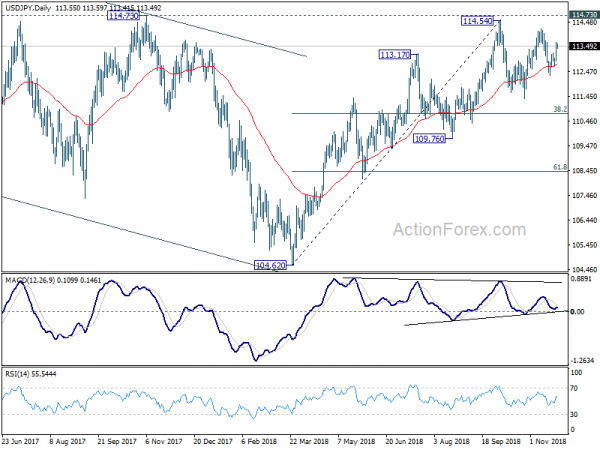