Dollar is mildly softer in Asian session as traders turn cautious ahead of FOMC rate decision. But it should be noted that, except versus less, and to a lesser extent Swiss Franc, Dollar isn’t that weak. EUR/USD, GBP/USD and AUD/USD are bounded in consolidation in familiar range. USD/CAD has indeed extended recent rally, thanks to free fall in oil prices. The wild card in the new FOMC economic projections. Dollar could have a breakout from ranges whether there are changes in the projections or not.

Despite all the political pressure, Fed is widely expected to raise federal funds rate by 25bps to 2.25-2.50% today. The meeting bears much more importance then just the rate hike, as investors would be eager to know Fed’s rate path in 2019, which has become pretty unsure recently. The statement, voting, and economic projections could all play a part in shaping market expectations.

In the November statement, Fed concluded by saying that “In determining the timing and size of future adjustments to the target range for the federal funds rate, the Committee will assess realized and expected economic conditions relative to its maximum employment objective and its symmetric 2 percent inflation objective. This assessment will take into account a wide range of information, including measures of labor market conditions, indicators of inflation pressures and inflation expectations, and readings on financial and international developments.”

That is, Fed based its decision on a wide range of meaningful data rather than just a few pieces of them. While Chair Jerome Powell might put more emphasis on data dependency, the statement itself is clear and comprehensive enough that doesn’t warrant a change.

On economic projections, the most important part is federal funds rate projections. As a recap, back in September, the longer run federal funds rate was estimated to be at 3.0%, with central tendency at 2.8-3.0% and 2.5-3.5%. Despite financial market volatility and signs of peaking growth momentum, it still a consensus among fed policies to lift rate to neutral. And if we take the central tendency as consensus, there should be at least one to two more rate hikes onwards.

But timing is the question. For 2019, the median federal funds rate projection was at 3.1%, with central tendency at 2.9-3.4%. That means, members leaned towards two to three more hikes in 2019, if economic conditions favored. At the same time, that would mean interest rate would go pass neutral a little.

While we won’t expect many changes to the projections, we won’t be surprised to see some. And changes or not, Dollar would be volatile on the figures.

UK Prime Minister Theresa May’s spokesman said yesterday that the Cabinet agreed that the government should start no-deal Brexit preparation “in full”. He noted “we have now reached the point where we need to ramp up these preparations”. And, “we will now set in motion the remaining elements of our no-deal plans”.

Additionally, “Cabinet also agreed to recommend businesses now also ensure they are similarly prepared, enacting their own no-deal plans as they judge necessary”.

The Thomson Reuters/INSEAD Asian Business Sentiment Index rose to 63 in Q4, up from 58 in Q3 which was a near three year low. While readings above 50 still indicates a positive outlook, the result is still one of the lowest readings in years.

Antonio Fatas from INSEAD noted in the release that “this confirms the reading of the previous quarter: there is more uncertainty, there are increasing concerns about growth,” And, “this doesn’t mean there is going to be a crisis over the next quarters, but if there is one, this is an indication that it wouldn’t be a large surprise to some.”

Global trade war is, by some distance, the biggest perceived risks to business outlook. China slowdown and higher interest rates followed and then Brexit. The report also noted that, “the dispute between the world’s two biggest economies, threatens businesses throughout the region due to global value chains.”

Canadian CPI will be a focus in US session too. US will release existing home sales, crude oil inventories and the highly anticipated FOMC rate decision and press conference. 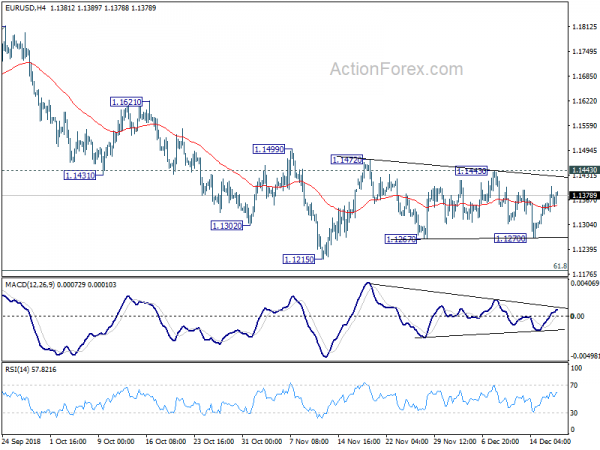 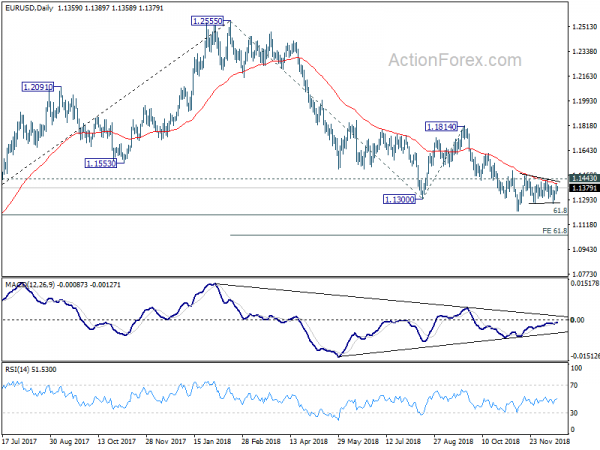