European majors are trading notably lower today. Euro is weighed down by concerns over slowdown in Germany, which might already had a technical recession in Q3 and Q4 already. Sterling also pares back some gains again traders turn cautious, ahead of the Brexit meaningful vote. Commodity currencies are relatively resilient but they’re just bounded in tight range. There was some optimism earlier after China pledged to strive for a strong start in 2019. But such optimism quickly faded. Dollar is trading mixed while US government shutdown is extending its record run.

Technically, EUR/USD’s breach of 1.1422 minor support suggests that recent rebound has completed earlier than expected. More downside is now mildly in favor for 1.1307 support. Ideally, that should be accompanied by stronger rebound in USD/CHF to 0.9963 resistance. Another development is EUR/JPY and GBP/JPY struggled to stay above 124.61 and 139.88 resistance respectively, and retreated. We’d continued to expect strong resistance from these levels to complete the rebound in the two Yen crosses.

Empire State manufacturing dropped to lowest well over a year

Empire State manufacturing index dropped sharply to 3.9 in January, down from 10.9, and missed expectation of 11.6. That’s also the lowest level in “well over a year” since mid-2017. Also, the headline index has already fallen a cumulative 18 pts since November. Additionally, firms were “less optimistic about the six-month outlook than in recent months.”The index for future business conditions fell thirteen points to 17.8, and the indexes for future new orders and shipments also declined.

UK May pledges to respond to Brexit vote results quickly

All eyes are now on the Brexit meaningful vote in the Commons today. There is no exact time set, but it’s believed to be somewhere between 1900-2100 GMT. Ahead of that Prime Minister Theresa May’s spokesman reiterated the stance that “the prime minister said the government is the servant of the people and she believes passionately that we must deliver on the result of the 2016 referendum”. And, “she added that after the vote has taken place, she would respond quickly to the result.”

EU Centeno: Anything is better than a no-deal Brexit

Eurogroup head Mario Centeno tried to sound softer on EU stance on Brexit agreement today. He indicated that should the deal is voted down by UK Parliament today, there are room for more talks and adjustments to avoid a no-deal Brexit.

He said “we will see the result (of the vote) today and we can adjust our trajectory”. And, “we can open all the dossiers … We need to take informed decisions with total calm and avoid a no-deal exit. Practically anything is better than a no-deal exit.”

In a speech titled “20th anniversary of the euro“, ECB President Mario Draghi hailed that with the Single Market, ” we have a powerful engine of sustainable growth to underpin our living standards”. And the Euro has “safeguarded the integrity of the Single Market.”

In addition, he said euro has “produced two decades of price stability also in countries where this was a long lost memory.” And that “fostered people’s confidence”, with such ” firms invest and create new jobs.”

Draghi also said “today most challenges are global and can be addressed only together”. Such “togetherness” magnifies the ability of individual countries to retain the sovereignty over the relevant matters. And, together “we have a voice in the regulation of international financial market”.

The Economy Ministry said the slowdown was due to weaker global economy, car industry’s sales problem, outbreak of flu and strikes. It’s optimistic that the economy will likely expand at the start of 2019. However, Euro drops notably today on worries that Germany was in a technical recession with contraction in last Q3 and Q4.

Also from Eurozone, trade surplus widened to EUR 15.1B in November, above expectation of EUR 13.2B.

China pledges to strive for good start in Q1

Stocks in Asia surge on hope that China would launch more stimulus measures to support the slowing economy. Chinese Premier Li Keqiang pledged to work to give the economy a strong start to achieve 2019 economic targets. There is no detail on the plan so far.

Li was quoted by State TV saying “we should strive for a good start in the first quarter to create conditions for completing the key full-year development targets and tasks.” And, “our country’s development environment is becoming more complex this year, there are more difficulties and challenges and the downward pressure on the economy is increasing,”

It’s reported that the Chinese government is planning to lower growth target to 6-6.5%, down from expected 6.6% in 2018. 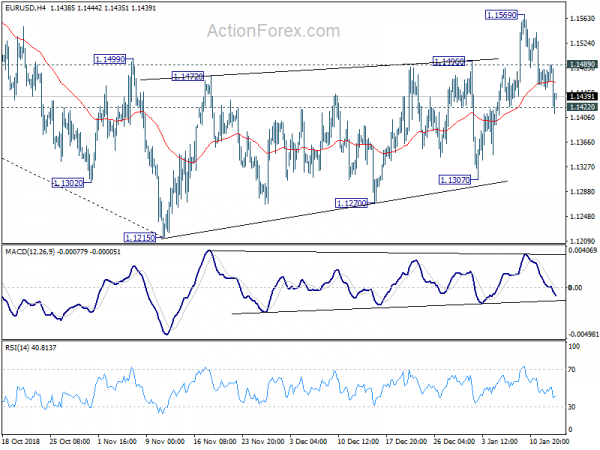 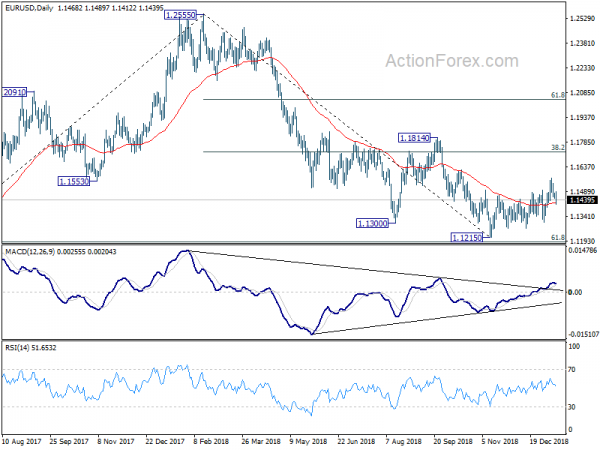