Yen trades generally lower in rather quiet markets today. Risk appetite strengthens mildly despite extended record run in US government shutdown. There were rumors that US is considering to roll back tariffs to facilitate trade negotiation with China. But that was quickly denied. Nevertheless, Fed’s “patience” rhetorics continued which is sentiment supportive. For the week, Sterling continues to ride on Theresa May’s Brexit deal defeat and stays the strongest one. Dollar follows as second strongest, with a little help from rebound in yields. Kiwi is the weakest one followed by Swiss Franc.

Technically, GBP/USD’s rebound form 1.2391 resumed by breaking 1.2930 overnight. Further rise would be seen to 1.3174 resistance. EUR/GBP is also on track to 0.8655 low as fall from 0.9101 extends. GBP/JPY’s strong break of 139.88 resistance now raises the chance of larger trend reversal. 143.93 minor resistance is the next hurdle. USD/CHF is also getting closer to 0.9963 resistance. Break there will confirm completion of recent corrective pull back from 0.9963.

Fed Evans: We’re at a good point for sort of pausing rate hikes

Chicago Fed President Charles Evans said “I’m not worried about inflation getting out of hand” and Fed is “at a good point for sort of pausing” rate hikes. Though, he “wouldn’t be surprised if at the end of the year we have a funds rate that’s a little bit higher than where we are now.” But, “that would be associated with a better economy and inflation moving up.”

Evans also noted risk from uncertainties including slowdown in Europe and China, trade war. On government shutdown, he warned “the longer it goes on, I think it becomes a little bit more of a challenge, and the uncertainties mean that people are going to delay making certain types of investments, and that’s not good for the outlook either.”

WSJ reported yesterday that US Treasury Secretary Steven Mnuchin was considering the idea of lifting some of even all of extra tariffs on Chinese imports to facilitate trade negotiation with China. But a Treasury spokesman quickly denied.

The spokesman said “neither Secretary Mnuchin nor Ambassador Lighthizer have made any recommendations to anyone with respect to tariffs or other parts of the negotiation with China.” And, “this an ongoing process with the Chinese that is nowhere near completion.”

Mnuchin is widely considered a dove in the trade war with China, and he has rather good relationship with Chinese Vice Premier Liu. So we won’t be surprised if Mnuchin has considered or even brought out such idea. But he is often seen as isolated by others in the team on the issue. So, it doesn’t really mean a thing even if he did make that suggestion.

Liu has confirmed his scheduled to visit Washington on January 30-31. The result of the meeting with USTR Robert Lighthizer then is the real key and the whole negotiation.

Germany and China pledged to deepening cooperation in the finance sector and fight trade protectionism during Finance Minister Olaf Scholz’s two-day visit to Beijing. And three pacts are signed, including agreements with the China Banking and Insurance Regulatory Commission and China’s Securities Regulatory Commission.

Ahead of today’s meeting with Chinese Vice Premier Liu He, Scholz said “it is important that, contrary to recent trends that we can observe elsewhere, we are seeing progress in our cooperation”. And, “we have a lot of common interests in financial matters, and then we need to bring different perspectives together. I believe that is the very important task of this financial dialogue.”

Japan core CPI slowed more than expected to 0.7% in Dec

The data showed that even discounting the fall in energy prices, consumer inflation stayed week. And apparently, the recovery is not passed on to consumers. And business remained reluctant to raise prices.

The data added to the case for BoJ to cut inflation forecasts next week. Back in October, BoJ projects core CPI to hit 1.4% in fiscal 2019 and then 1.5% in fiscal 2020. Such projections would be trimmed to reflect the decline in oil as well as global slowdown.

Swiss will release PPI in European session while Eurozone will release current account. But main focus is on UK retail sales. Later in the day, Canada CPI will catch most attention. US will release industrial production and U of Michigan consumer sentiment.

GBP/USD’s rebound from 1.2391 resumed by taking out 1.2930 and reaches as high as 1.3001 so far. Intraday bias is back on the upside and current rise should target 1.3174 resistance, which is close to 38.2% retracement of 1.4376 to 1.2391 at 1.3149. As such rebound is seen as a corrective pattern, we’d expect strong resistance from there to limit upside, at least on first attempt. On the downside, below 1.2832 minor support will turn intraday bias neutral first. But further rally will remain in favor as long as 1.2668 minor support holds. 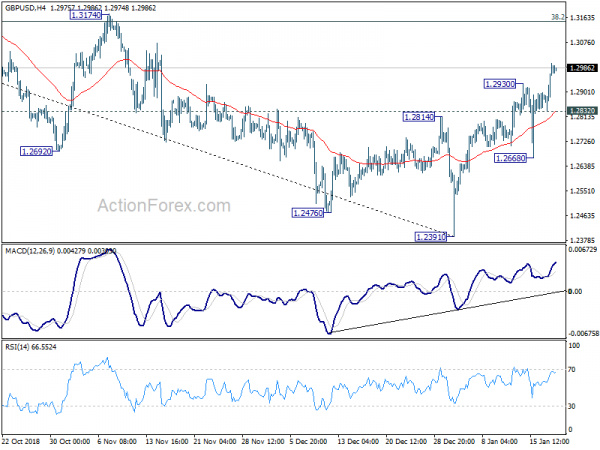 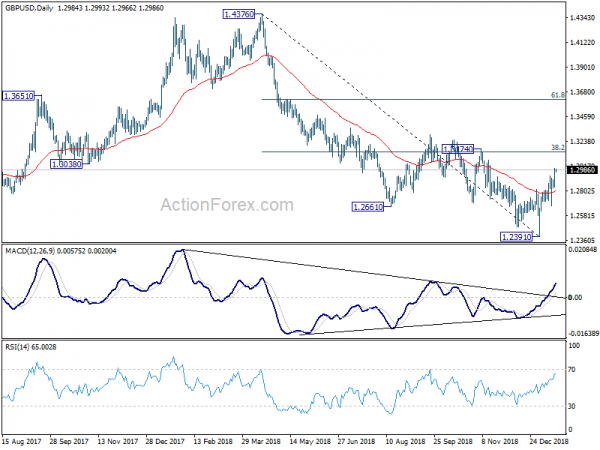