Dollar stays generally soft as FOMC minutes delivered little surprise overnight. Fed is generally still expected to hike interest rate again in June. The plan for shrinking the balance sheet was outlined too. US equities were firm with DOW, S&P 500 and NASDAQ heading back to record highs. But treasury yields and Dollar didn’t follow. The Dollar index is trading soft at around 96.9 at the time of writing as renewed strength in seen in EUR/USD in Asian session. The Dollar index is still on course for medium term fibonacci level at 96.46. Meanwhile, Canadian dollar jumps overnight as markets responded positively to BoC statement and strength in oil price.

In the minutes of May FOMC meeting, Fed noted most officials agreed that it’s appropriate to raise interest rate again "soon". This is in line with markets expectation of a June hike with fed fund futures pricing in 83.1% odds of that. Fed also outlined the plan to normalize its USD 4.5T balance sheet. "Most participants judged that if economic information came in about in line with their expectations, it would soon be appropriate for the committee to take another step in removing some policy accommodation." According to the plan, the process will be similar to Fed’s tapering. At the very beginning, a small amount of securities would be allowed to roll off without reinvesting. Meanwhile, the amount would increase in regular increments. Such a plan could be set on auto-pilot unless there was a major deterioration in the economic outlook. And the minutes noted that "nearly all policymakers expressed a favorable view of this general approach."

Bank of Canada left overnight rate target unchanged at 0.50% as widely expected yesterday. The bank rate was held correspondingly at 0.75% and the deposit rate at 0.25%.

Canadian Dollar responded positively as the statement noted that "the Canadian economy’s adjustment to lower oil prices is largely complete and recent economic data have been encouraging, including indicators of business investment." Also, "consumer spending and the housing sector continue to be robust on the back of an improving labour market, and these are becoming more broadly based across regions." Nonetheless, the statement also noted subdued export growth due to competitive challenges and growth in Q2 will moderate from the "very strong growth in Q1". Globally, BoC acknowledged that global economy "continues to gain traction" and growth will "gradually strengthen and broaden". It talked down the weakness in US in Q1 and believed that they were due to "mostly temporary factors".

Overall, BoC judged that "the current degree of monetary stimulus is appropriate at present". That was a change from April’s statement with "the current stance of monetary policy is still appropriate " The addition of "stimulus" and a time element of "at present" argues that BoC could be starting to tweak its language to open the door for a rate hike later in the year.

Development in oil price also supports the Canadian Dollar. WTI crude edges higher to 51.93 today and recent rally is still on course to 53.76/55.24 resistance zone. The Joint OPEC-NON-OPEC Ministerial Monitoring Committee recommended a nine-month extensions of production cut to ministers of member countries, who are meeting in Austria today. Oil Ministers of Iraq and Iran expressed their support with the extension. Iranian Oil Minister said " it’s a unanimous idea to continue the cut we decided in December." Nonetheless, while there were some speculations of the possibility of a deeper cut, Iraqi Oil Minister Jabbar al-Luaibi said that "it’s only the freeze we are talking about. We will continue with the current cuts."

In the financial stability review released yesterday, ECB acknowledged positive development at regional and global level. The central bank noted that "most measures of euro area systemic stress remained at low levels over the past six months. Growing optimism about economic growth prospects in the United States and Europe boosted global market sentiment in the early part of the review period." Nonetheless, it cautioned that "recent developments do, however, cast some doubt on the materialisation of a significant reflation in the United States." Also, "financial market sentiment improved over the review period, but risks of further repricing in bond markets remain."

ECB also noted in the report that "in some countries where political support for pursuing fiscal and structural reforms was viewed by the markets as waning, investors required additional risk premia on sovereign bonds." And, "overall, risks to financial stability stemming from financial markets remain significant, mainly owing to the possibility of a further rapid repricing in global fixed income markets."

Regarding the banking sector, ECB said that "interest rates still remain at low levels and continue to challenge banks’ ability to generate sustainable profits. Furthermore, in some regions, banks’ profitability prospects continue to be dampened by the large stocks of non-performing loans." Also, "a number of structural challenges also weigh on banks’ longer-term profitability prospects, including overcapacity in certain banking markets, a limited degree of income diversification and cost-inefficiencies in several banking sectors."

USD/CAD’s decline continues today and reaches as low as 1.3394 so far today. Intraday bias remains on the downside as the fall from 1.3793 is targeting 1.3222 support next. As noted before, corrective rally from 1.2460 could have finished ahead of 1.3838 fibonacci level. Break of 1.3222 will affirm this case and target 1.2968 key support level for confirmation. On the upside, above 1.3455 minor resistance will turn bias neutral and bring another recovery first. 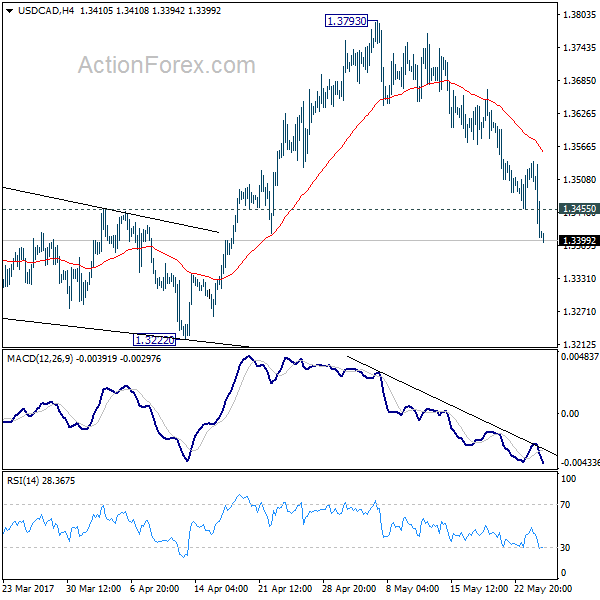 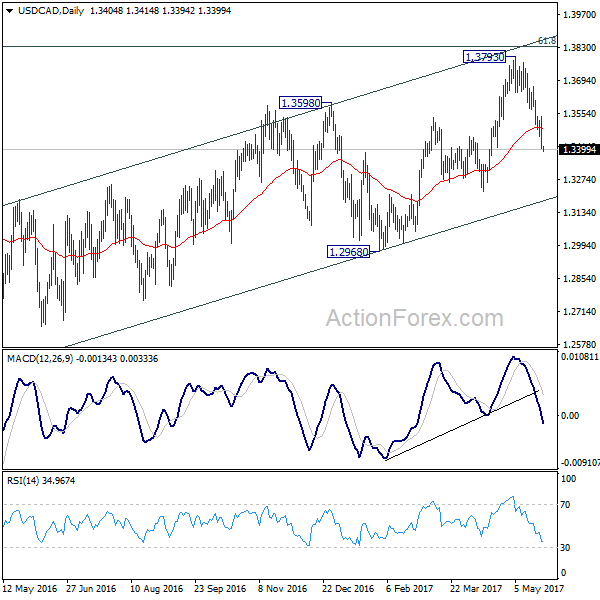