The free fall in the Pound is seen as a result of heightened uncertainty over the election in June. Latest YouGov poll published late on Thursday showed that 43% voters plan to vote for Prime Minister Theresa May’s Conservative Party. That compares to the support for Labour Party at 38%. That is, just a mere 5% lead. Back in April when May announced the snap election, it’s believed that the Conservative would have a landslide victory due to the over 20 point lead. A less than strong victory will weaken May’s stance in Brexit negotiation with EU.

Trump agrees that Brexit is an incident, not a trend

European Council president Donald Tusk said that he has convinced US President Donald Trump that Brexit is a very important and dramatic "incident" but "not a trend". And hailed that as a "very positive momentum in our discussion. European Commission president Jean-Claude Juncker said regarding conversion on Brexit with Trump that "this in our eyes is a real tragedy, that it is not in the interest of either of the British nor the continental and Irish Europeans." Meanwhile, it’s reported, quoting unnamed source, that Trump has expressed his concerns to EU leaders that Americans may lose job due to Brexit.

Dollar trades mixed in early US session after mixed economic data. Q1 GDP growth was revised up to 1.2% annualized, beating expectation of 0.9% and was much better than first estimate of 0.7%. GDP price index was revised lower to 2.2%. Headline durable goods orders dropped -0.7% in April, better than expectation of -1.5%. However, ex-transport orders dropped -0.4%, much worse than consensus of 0.4%.

Technically, EUR/USD dips mildly and is set to extend the consolidation from 1.1267 with another fall. We’ll stay cautious on rejection from 1.1298 key resistance but there is no firm sign of near term reversal yet. GBP/USD, however, breaks through 1.2844 near term support today, on broad based weakness in Sterling. This is seen as a sign of near term trend reversal.

Meanwhile, USD/JPY recovers mildly ahead of 110.85 support but stays vulnerable to another fall. AUD/USD also recovery mildly ahead of 0.7405 resistance. USD/CAD continues to gyrate in tight range above 1.3387. The direction in the greenback is not clear.

GBP/USD’s fall from 1.3047 accelerates to as low as 1.2809 and broke 1.2844 support. The development, and the break of near term channel support, suggest reversal in the pair. That is, the rise from 1.2108 could be finished at 1.3047 already. Intraday bias is turned back to the downside for 1.2614 resistance turned support. Also, noted again that we are still viewing price actions from 1.1946 as a corrective move. Break of 1.2614 will indicate that such correction is finished too and the larger downtrend is is resuming for new low below 1.1946. This will be the mildly preferred case now as long as 1.3047 resistance holds.

In the bigger picture, fall from 1.7190 is seen as part of the down trend from 2.1161. There are signs of reversal, like breaking of 55 week EMA, weekly MACD turned positive, and monthly MACD crossed above signal line. But still, break of 1.3444 resistance is need to confirm medium term bottoming. Otherwise, outlook will remains bearish for extend the down trend through 1.1946 low. 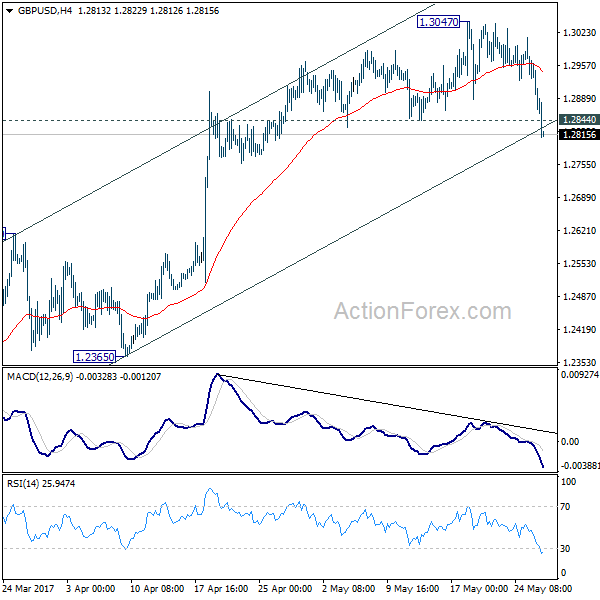 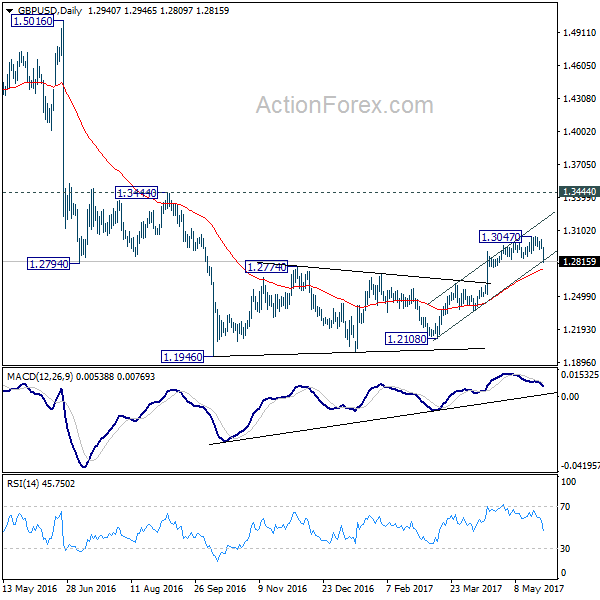