Trump Knocks Down Oil Price after Shooting Up Chinese Stocks

Trump is the biggest market mover in an otherwise rather listless day. Chinese stocks surged 5.6% on news that trade truce deadline on March 1 is postponed. He’s now planning a summit in Mar-a-Lago to seal the trade deal with Chinese President Xi Jinping. Later in the day, WTI drops over 2.3% after Trump complains that oil prices are too high with his tweet, and urges OPEC to relax. Canadian Dollar and Yen are racing for the worst performer spot for today.

On the other hand, Australian and New Zealand Dollar are taking turns to be the strongest one. But it should be noted that momentum in both currencies are not too convincing yet. AUD/USD is held well below 0.7206 resistance for now. NZD/USD is also kept below 0.6941 resistance. EUR/AUD is also holding well above 1.5743 support. Meanwhile, USD/JPY, EUR/JPY and GBP/JPY are staying in tight range. Traders will need some more time to make up their mind to commit to a direction. 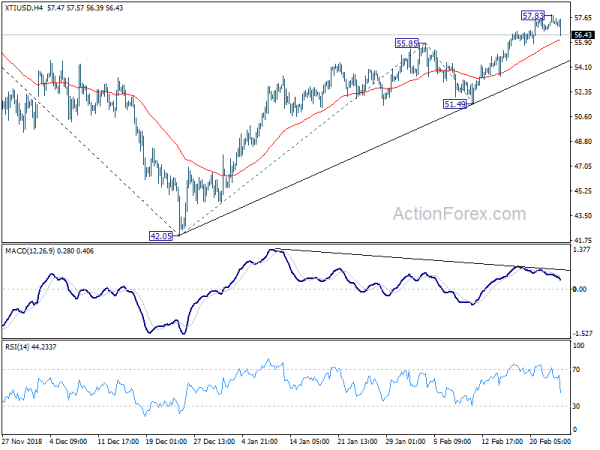 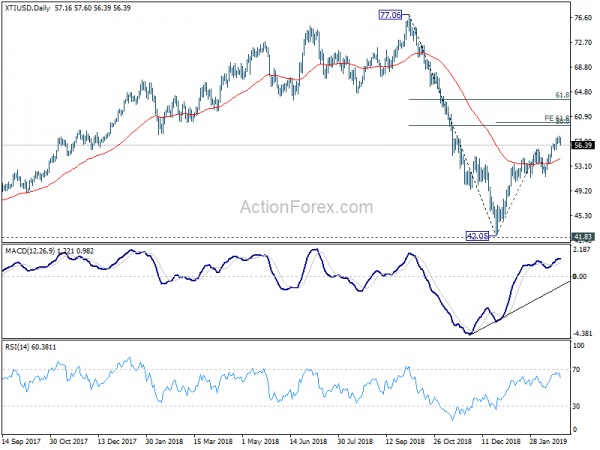 Trump tweeted on Sunday that there was “substantial progress” made in US-China trade talks on “important structural issues including intellectual property protection, technology transfer, agriculture, services, currency, and many other issues”. Hence he will be delaying the scheduled March 1 tariff increase. In other words, trade truce now extends beyond the date.

Trump added that assuming there is additional progresses, he is planning a summit with Chinese President Xi Jinping at Mar-a-Lago resort in Florida to conclude the agreement. Later, Trump also said there could be “very big news over the next week or two” if all goes in well. He added that “China has been terrific. We want to make a deal that’s great for both countries and that’s really what we’re going to be doing.”

Performance in Chinese stock is overwhelming today. The Shanghai SSE blew our expectations and closed up 5.60% at 2961.28. 38.2% retracement of 3587.03 to 2440.90 at 2883.84 was taken out with ease. Technically speaking, it’s early to declare that China SSE is now in a long term bull market. The strong break of 55 week EMA is nevertheless a strong bullish development. Now, the corrective down trend from 5178.19 should have completed with three waves down to 2440.90, on bullish convergence condition in weekly MACD.

Atlanta Fed President Raphael Bostic said there is “room to run” with Fed’s rate hikes. as long as the economy is “running fine” and there is no sign of contraction. He expects the economy growth between 2.2-2.5% this year. But inflation is expected to rise above 2% target. Bostic is still aiming at lifting Federal funds rate to neutral. And a slow approach is a good path for Fed. He’s currently seeing one rate hike this year and one in 2020.

European Commission spokesman Mina Andreeva said that EU’s assumption is that UK will still leave as planned on March 29. Brexit Minister Stephen Barclay and Attorney General Geoffrey Cox will meet EU chief negotiator Michel Barnier again on Tuesday. Andreeva also noted “good progress was being made” on the EU-UK political declaration on future ties and on “alternative arrangements” and “possible additional guarantees” on the Irish backstop. She added that both sides “agreed on the need to conclude this work in time before the European Council (of March 21)”.

UK Prime Minister Theresa May announced yesterday that a Brexit “meaningful vote” would not take place this week. Instead, the vote on the withdrawal agreement is rescheduled to March 12, just 17 days before the March 29 Brexit date. Though, the Parliament will still hold a series of Brexit votes on Wednesday. Also, May insisted that “we still have it within our grasp to leave the European Union with a deal on the 29th of March and that’s what I’m going to be working at”.

Bank of England, UK’s Financial Conduct Authority and US Commodity Futures Trading Commission announced measures today to ensure Brexit, in whatever form “will not create regulatory uncertainty regarding derivatives market activity between the UK and US”. Measures include continued supervisory co-operation, extension of existing CFTC relief to EU firms to UK after Brexit. Also, US trading venues, firms and CCPs will be able to continue providing services in the UK.

In a joint statement, BoE Governor Mark Carney said “As host of the world’s largest and most sophisticated derivative markets, the US and UK have special responsibilities to keep their markets resilient, efficient and open. The measures we are announcing today will do that. Market participants can be confident that the clearing and trading of derivatives between the UK and US will maintain the high standards of today when the UK leaves the EU”. Carney also warned that “The biggest issue from a financial stability perspective, from a market integrity perspective, from a continuity perspective, is a no-deal scenario by the end of March.”

Koichi Hamada, an advisor to Japanese Prime Minister Shinzo Abe said the BoJ could abandon the 2% inflation target. He told Reuters that “prices don’t need to rise much. From the perspective of people’s livelihood, what’s more desirable is for prices to fall, not rise.”

And, the inflation target is only “a tool for achieving full employment”. Hamada added “it can be abandoned. It isn’t absolutely crucial”, and the “appropriate target level of inflation can be decided by the central bank”.

On current monetary policy, Hamada said “the world economy faces substantial turbulence, the BOJ can wait”. There is no need for loosen up policy too as “Demand is exceeding supply now. As long as this trend continues, we don’t need to worry too much.”

EUR/USD is still staying in tight range below 1.1371 temporary top and intraday bias remains neutral. On the upside, break of 1.1371 would extend the rebound from 1.1234. In that case, rise from 1.1234 is seen as another leg in the consolidation pattern from 1.1215 and should target 1.1514 resistance. On the downside, break of 1.1275 minor support will turn bias back to the downside for 1.1215 low instead. Decisive break there will confirm completion of consolidation from 1.1215, and resumption of down trend from 1.2555. 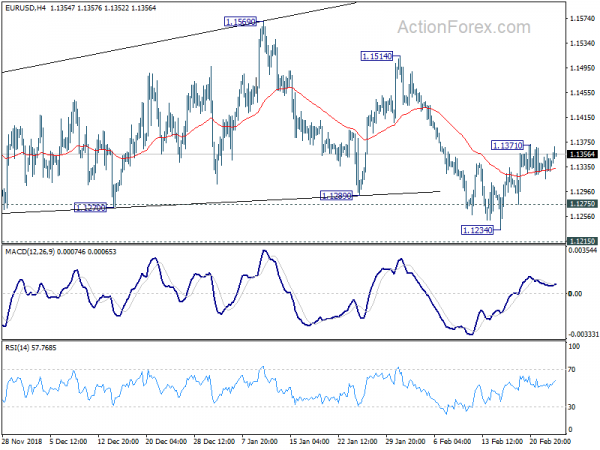 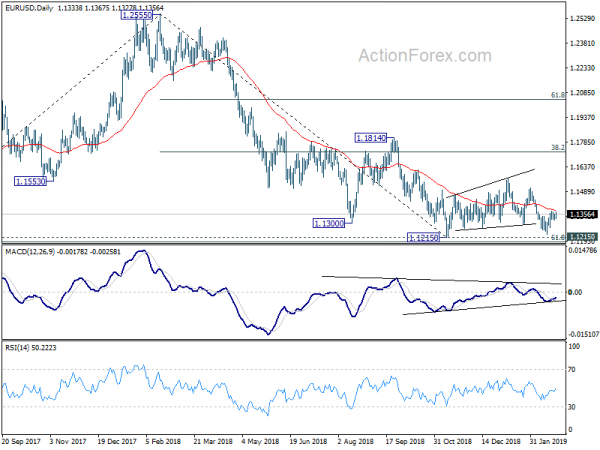