Dollar trades generally higher today even though upside momentum is capped by weaker than expected durable goods report. Economic data released this week are so far mixed. But at least, they don’t point to heightened recession risk. While long treasury yields retreat mildly today, they’re held well above last week’s low. Overall sentiments seem to be stabilized, at least ahead of non-farm payrolls report on Friday.

On the other hand, Sterling is trading as one of the weakest for today. Brexit uncertainty is never ending after Commons rejected all four alternatives yesterday. It seems the lack of decisiveness in the Commons has spread to Prime Minister Theresa May too. It’s reported that she still firmly opposes to a second referendum, as well as long Article 50 extension. There is no sign that she’ll call for general elections. The only thing she might so could be just take the thrice defeated deal back for another vote. But Speaker John Bercow is said to reject it. After all, it seems no one knows what’s next.

Australian and New Zealand Dollar are also among the weakest. While there was no clear dovish shift, the RBA statement suggests that it is starting to get ready for a move, depending on upcoming data. Markets are expecting two cuts this year. The trigger of a formal dovish shift could be from May’s new economic projections.

EU Barnier: No-deal Brexit becomes more likely but we can still avoid it

EU chief Brexit negotiator Michel Barnier said at an event in Brussels that “over the last days a no-deal scenario has become more likely.” Though, he remained optimistic that “we can still hope to avoid it.” He urged the UK to “indicate the way forward or indicate a plan… more today than ever”. He reiterated the agreement Brexit deal was “the only way” to leave EU in an orderly way.

Meanwhile, Barnier also said EU27 is ready for a disorderly, abrupt Brexit. But he emphasized: “Being prepared for no-deal doesn’t mean that everything will be smooth. There will be disruptions, there will be problems. Being prepared means all unforeseen disruptions could be managed by the EU”.

Swiss CPI rose to 0.7% in March, but well off cyclical peak

The FSD noted that the increase in CPI could be explained by several factors, including “rising prices for international package holidays and for air transport”. Meanwhile, “prices for fruiting vegetables and berries decreased.

RBA kept cash rate at 1.50%, no dovish shift but hints on data dependency

RBA left cash rate unchanged at 1.50% as widely expected. There is one very subtle change in the statement that’s picked up by the markets. Back on March 5, RBA concluded by saying “Board judged that holding the stance of monetary policy unchanged at this meeting would be consistent with sustainable growth in the economy and achieving the inflation target over time.”

In today’s statement, RBA said “the Board judged that it was appropriate to hold the stance of policy unchanged at this meeting. The Board will continue to monitor developments and set monetary policy to support sustainable growth in the economy and achieve the inflation target over time.”

That is, RBA added some development-dependency on monetary policy. That hinted RBA could be ready to move in economic data warrant so and interest rate might not stay there for long. Given that markets are expecting two cuts this year, RBA’s change in statement is a small step affirming this view.

There are little changes in other parts of the statement though. RBA noted that GDP data paint a “softer picture” of the economy than job data. It acknowledged the mere 0.2% growth in Q4 and 2.3% over 2018. It also noted that “growth in household consumption is being affected by the protracted period of weakness in real household disposable income and the adjustment in housing markets.”

Employment and inflation outlook are unchanged. RBA expects “continued improvement in the labour market is expected to see some further lift in wages growth over time”, gradually. Inflation is expected to pick up gradually over the next couple of years. The central scenario is unchanged for inflation to hit 2% in 2019 and 2.25% in 2020.

Also released, Australian building approvals jumped sharply by 19.1% mom in February versus expectation of -1.8% mom. Japan monetary base rose 3.8% yoy in March, below expectation of 4.4%.

WTO forecasts global trade growth to slow to 2.6% this year

WTO warned that global trade will continue to face “strong headwinds” this year and next due to “rising trade tensions and increased economic uncertainty. For 2019, growth in trade volume is forecast to slow to 2.6%, down fro 3.0% in 2018. Though, trade growth should pic up again to 3.0% in 2020. It also warned that trade tensions still pose the greatest risk to the forecast, but a relaxation could provide some upside potential.

In the press release, WTO Director General Roberto Azevêdo said: said “it is increasingly urgent that we resolve tensions and focus on charting a positive path forward for global trade which responds to the real challenges in today’s economy – such as the technological revolution and the imperative of creating jobs and boosting development.”

WTO’s chief economist Robert Koopman also warned that “any automobile tariff would likely have bigger knock on effects through the global economy than what we see from the U.S.-China conflict.”

Intraday bias in EUR/USD remains on the downside at this point. Fall from 1.1448 is in progress for 1.1176 low. Firm break there will resume whole decline from 1.2555. On the upside, however, break of 1.1273 support turned resistance will turn bias back to the upside for 1.1448 instead. 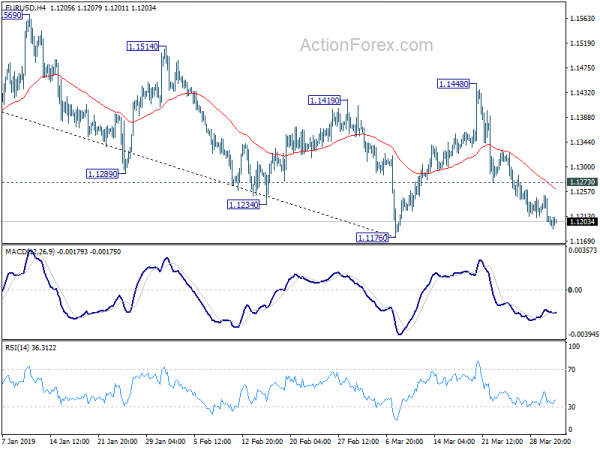 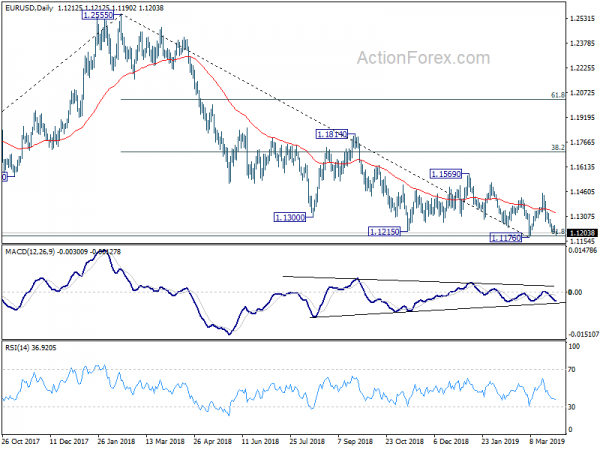