The talk of a March rate hike by Fed is heating up this week. It’s reported that based on Bloomberg’s world interest rate probability tool, the markets are pricing over 50% chance for a March hike. Sharply higher than around 34% a week ago. This is seen as a reaction to recent hawkish comments from Fed officials. However, reactions in markets in general are not that apparent. US equities stayed cautious with DJIA closing up 15.68 pts or 0.08% at 20837.44. S&P 500 rose 2.41 pts or 0.1% to close at 2369.75. Treasury yields recovered with 10 year yield closing up 0.052 at 2.369, but stays near to bottom of recent range. Dollar index also rose slightly, back above 101 handle but stays far enough from 101.79 near term resistance. Dollar is also trading mixed, down against Euro and Aussie for the week.

Dallas Fed president Robert Kaplan said that interest rate should rise "sooner rather than later". And "sooner rather than later means in the near future" but without reference to a specific time frame. He also urged to "guard against a situation where we get behind the curve". However, Kaplan also emphasized not to "overread or overreact" to market expectations. And "market probabilities can change very rapidly".

Trump to increase military spending by USD 54b

It’s believed that fiscal policies of US president Donald Trump would play a great role in Fed’s rate path. So far, as some Fed officials noted, with no details, fiscal policies are not taken into consideration in their projections yet. Trump will address the Congress for the first time today. Markets are eagerly awaiting for his speech for details on economic policies, in particular the tax reform and infrastructure spending. However, speaking to governors at the White House yesterday, Trump called for an increase of USD 54b in military spending. Meanwhile, budget for non-military programs will be lowered by the same amount. And that would be the core of the speech to Congress to day.

In UK, the British Chambers of Commerce published a report based on feedback from more than 400 businesses. It urged the government to give "solutions and certainty" to business before Brexit. BCC director general Adam Marshall said that "business communities across the UK want practical considerations, not ideology or politics, at the heart of the Government’s approach to Brexit negotiations". Meanwhile, the report also urged the government to "aim to minimise tariffs, seek to avoid costly non-tariff barriers, grandfather existing EU free trade agreements with third countries, and expand the trade mission programme".

AUD/USD is still bounded in range of 0.7605/7740 for the moment. Intraday bias stays neutral at this point. Another rise cannot be ruled out. However, considering bearish divergence condition in 4 hour MACD, upside should be limited by 0.7777/7833 resistance zone and bring near term reversal. On the downside, break of 0.7605 support will indicate that rise from 0.7158 has completed already and turn bias back to the downside for 55 day EMA (now at 0.7559) first. 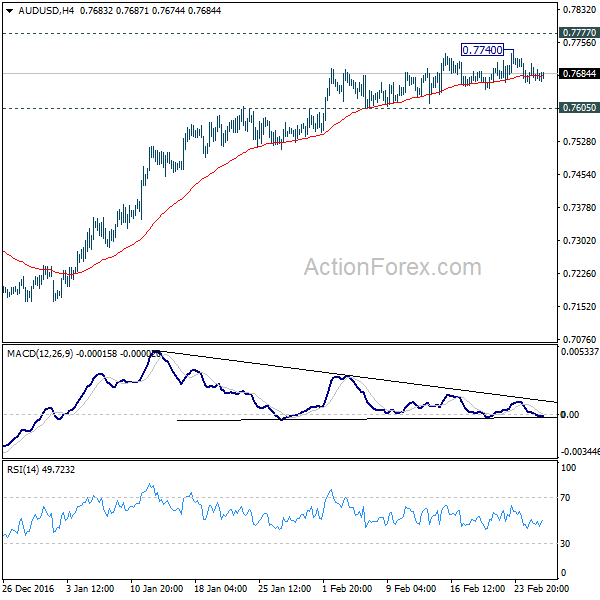 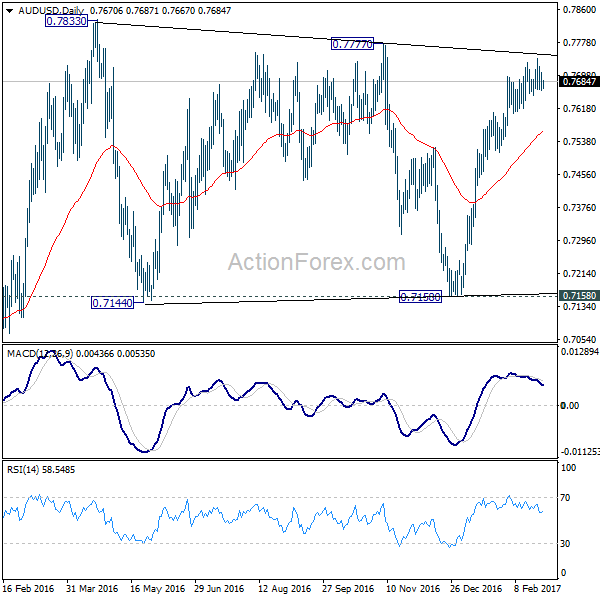