Market sentiments somewhat stabilized in Asian session today. Major indices opened lower, following the selloff in US. But losses are so far rather limited. Indeed, in the currency markets, Yen and Swiss Franc are paring some of yesterday’s strong gains while Gold also retreats back to below 1300. USD/CNH also dips back below 6.9 handle as Yuan recovers mildly.

The stage for this round of US-China trade war is set, with US tariffs effective last Friday and China’s retaliation ready for June 1. Next is US tariffs on USD 300B of essentially all other Chinese products. The public comments process has begun with hearing to be held on June 17. Between now and then, we’ll see if there is other progress that could pave the way for a Trump-Xi meeting at G20 meeting on June 28/29. Or, tensions could just continue to escalate.

In the currency markets, technically, USD/JPY dropped to as low as 109.02 yesterday but quickly recovered. EUR/JPY also holds on to 122.48 temporary low. We’ll see if Yen’s retreat is going to extend further. 110.40 minor resistance in USD/JPY is a level to watch. EUR/GBP is pressing 0.8681 resistance and break will suggests bullish reversal. That would be a strong indication of weakness in the Pound for near term. EUR/USD, while recovered yesterday, is considered to be in corrective pattern from 1.1111. Euro will look into today’s German ZEW to decide whether to extend the correction, or resume larger decline.

The US Trade Representative formally announced the product list of around USD 300B of Chinese imports for an additional ad valorem duty of up to 25 percent. The list “covers essentially all products not currently covered” by Section 301 tariffs on China. Though the list excludes “pharmaceuticals, certain pharmaceutical inputs, select medical goods, rare earth materials, and critical minerals. ”

Public comments are invited up till June 17, when hearing will be held in the main hearing room of the US . International Trade Commission. Final rebuttal comments are due seven days after the end of the hearing. The duration of consultation is notably shorter than before. 71 days was used last year for tariffs on USD 200B of Chinese goods. 42 days would be spend for the current round.

In the Oval Office, Trump expressed his optimism on US-China trade negotiation despite current escalation in trade war, and announced new plan to aid farmed affected.

Trump reiterated that the negotiations were 95% done when China suddenly backtracked on its commitments. And, the US cannot let China continue to take advantage on trade. But he on further talks, he added “we’ll let you know in about three or four weeks whether of not it was successful. … But I have a feeling it’s going to be very successful”. Regarding the new round of tariffs on USD 325B in Chinese imports, Trump sounded non-committal and said he hasn’t made a decision yet.

He went further to once again hailed his “very good relationship” with Xi and indicate there could be a meeting soon. He said: “Maybe something will happen. We’re going to be meeting, as you know, at the G20 in Japan and that’s be, I think, probably a very fruitful meeting.”

Additionally, Trump indicated the administration was planning a second round aids to farmers, at around USD 15B due to trade war. He said “we’re going to take the highest year, the biggest purchase that China has ever made with our farmers, which is about $15 billion, and do something reciprocal to our farmers so our farmers can do well.” And, “Out of the billions of dollars that we’re taking (tariffs), a small portion of that will be going to our farmers, because China will be retaliating, probably to a certain extent, against our farmers.”

Some American farmers are clearly frustrated with the way Trump handles trade negotiation with China. American Soybean Association shouted loud and clear in a statement that “Soy Growers Are Fed Up with Tariffs“. The ASA “cannot support continuing and escalating the use of tariffs” but the US would with “like-minded countries” to pursue the negotiation goal with China.

ASA President Davie Stephens criticized that US has been at table with China 11 times and “still has not closed the deal”. He added: “What that means for soybean growers is that we’re losing. Losing a valuable market, losing stable pricing, losing an opportunity to support our families and our communities. These trade negotiations are serious for us. Farming is our livelihood.”

Stephens added: “The soybean market in China took us more than 40 years to build, and as this confrontation continues, it will become increasingly difficult to recover. With depressed prices and unsold stocks expected to double by the 2019 harvest, soybean farmers are not willing to be collateral damage in an endless tariff war,”

John Heisdorffer, ASA Chairman, warned further to warn that “we cannot withstand another year in which our most important foreign market continues to slip away and soybean prices are 20 to 25 percent, or even more, below pre-tariff levels”. “The sentiment out in farm country is getting grimmer by the day. Our patience is waning, our finances are suffering, and the stress from months of living with the consequences of these tariffs is mounting”, he added.

Trump indicated he’s thinking about buying US farm products and distribute to poor countries, as a way to help farmers affected by trade war with China. But such simplistic, shallow way of thinking immediately drew criticism from Canada.

Canadian Agriculture Minister Marie-Claude Bibeau said yesterday that “dumping products in developing countries is not the way we do things.”

She added, “it seems easy, but it is complicated to do it the right way”. The process will need multilateral coordination. And, “obviously, it may create some distortion in the market and this is what we want to avoid.”

Fed Kaplan: Interests rate about where they should be, tariffs have come chilling effects

Dallas Fed President Robert Kaplan said interests are now “about where they should be”. And Fed should “move off to the side and be patient.” He added that fed should neighing be raising interest or cutting interest rates for now. “We’ll have to see where we go from here, and I’ll keep updating my judgment based on what we see in the economy,” He said.

Regarding trade war escalation with China, Kaplan said “what we don’t know right now is how long these issues will persist, how far will they go, will these tariffs, that have just been put on, and counter tariffs, will they be with us for months, weeks, or longer.”

Fed Rosengren: If Trump’s trade war causes slowdown, Fed has the tool to deal with it

Boston Fed President Eric Rosengren said Fed is well prepared to react if Trump’s trade war with China causes slowdown in the economy. He said, “if the impact of the tariffs – and whatever financial market reaction to those tariffs is – causes more of a slowdown, then we do have the tools available to us, including lower interest rates”.

But for now, “it’s hard for the Fed to react until we have better information, so in terms of us viewing our policies as being patient, I’m not sure this alters our view of that until we have a better sense of whether this is going to have more long-lasting effects,” Rosengren added.

Separately, Minneapolis Fed President Neel Kashkari said the “relative to China, the US is in a very strong position.” “Not only is our economy bigger, our economy is much less sensitive to trade. Trade is important to the U.S. economy, but it’s much more important to the Chinese economy, just as a share of its economy,” he added.

Looking at the details, business conditions, confidence and forwards orders are all below average. More worryingly, there was sharp decline in employment index from 6 to -1, first below average reading since late 2016. By industry, largest fall in employment occurred in retail, manufacturing an wholesale. But overall deterioration was rather broad-based.

Alan Oster, NAB Group Chief Economist noted: “We will continue to watch the employment index as well as the other forward looking variables over coming months for further slowing. In particular, the readings of labour market related variables will remain important as, for now, the interest rate outlook appears to hinge on continuing strength in the labour market”.

USD/JPY dropped to as low as 109.02 but quickly recovered. Still, with 110.04 resistance intact, further decline is expected. As noted before, whole rebound from 104.69 has completed at 112.40 already. Current fall from 112.40 should extend to retest 104.69 low. Nevertheless, break of 110.04 minor resistance will indicate short term bottom. Lengthier consolidation could be seen before another decline. 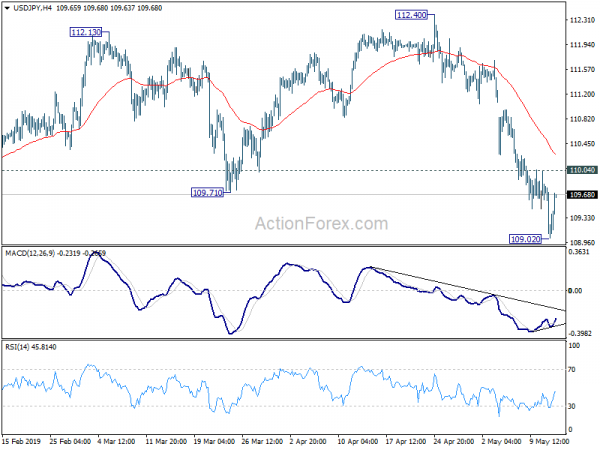 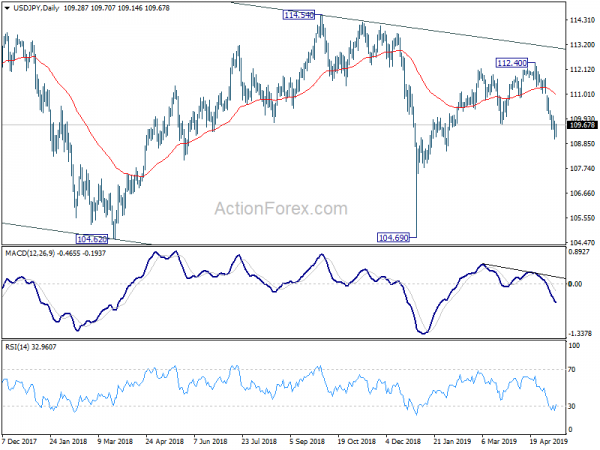 The Weekly Bottom Line: Markets Optimistic Despite No Deal Yet from Washington