Asian markets once again decouple from the US. While US stocks staged a strong rebound overnight, Asian indices are generally mixed. Weakness is indeed seen in China’s Shanghai SSE while Yuan resumes recent free fall. There is some negative reaction to report that China is not eager to resume trade negotiations with US for now. Though, there is no official comments from both sides on when the meeting will resume. US Treasury Secretary Steven Mnuchin said that the delegation will travel to Beijing soon. But Trade Representative Robert Lighthizer kept his lips tight.

Technically, consolidation in Yen crosses continued overnight with mild recovery. But there is not little signal on bottoming yet. Based on recent weakness, GBP/JPY could lead the way down today. Focus will be on whether USD/JPY and EUR/JPY would follow by breaking 109.02 and 122.08 temporary lows respectively. AUD/USD’s decline is still in progress, without much anticipated downside acceleration. Nevertheless, it’s still on track to 0.6722 low. EUR/USD breached 1.1173 minor support overnight, without follow through selling. We’d watch for selling to pickup today.

Separately, Bloomberg reported that China is not very keen in resuming trade negotiations with US, quoting a mysterious blog Taoran Notes. The blog is believed to be backed by the government and is one of the few voices on China’s negotiations strategy in a censored internet world in the country. The blog piece noted: “We can’t see the U.S. has any substantial sincerity in pushing forward the talks. Rather, it is expanding extreme pressure… If the U.S. ignores the will of the Chinese people, then it probably won’t get an effective response from the Chinese side,” it added.

Minneapolis Fed President Neel Kashkari said in a speech in Santa Barbara that Fed could have misread faulty signals from the labor markets. And current situation suggests monetary policy was too tight in this recovery. Fed should be patient and allow inflation to overshoot target. Yet, he doesn’t see cutting rates offer any help. Overall, he advocates a wait-and-see with patience approach.

Kashkari said Fed could have “misread” the labor market and feared that “if we hit maximum employment, inflation might suddenly accelerate”. Thus, “we would then have to raise rates quickly to contain it”. However, the “headline unemployment rate has been giving a faulty signal”. Considering inflation “somewhat too low” and job market “still showing capacity”, he added, “the only reasonable conclusion I can draw is that monetary policy has been too tight in this recovery”.

On monetary, policy, Kashkari said “for our current framework to be effective and credible, we must walk the walk and actually allow inflation to climb modestly above 2 percent in order to demonstrate that we are serious about symmetry”. However, he also told reporters that “I am not sure that cutting rates would do much to inflation expectations.”

Fed Lael Brainard said in a speech the central might adopt a so called “opportunistic reflation” strategy to lift underlying inflation to 2% and underscore its commitment to the inflation mandate. Such a strategy would accept a slight overshoot the 2% inflation target for a while, even if it’s driven by import prices.

She said “suppose that an unexpected increase in core import price inflation drove overall inflation modestly above 2% for a couple of years… The Federal Reserve could use that opportunity to communicate that a mild overshooting of inflation is consistent with our goals and to align policy with that statement.”

On the current outlook, she noted “the emerging contours of today’s new normal are defined by low sensitivity of inflation to changes in labor market slack, a low long-term neutral rate of interest, and low underlying trend inflation.”

BusinessNZ’s executive director for manufacturing Catherine Beard said that while the improvement in activity for April was welcome, the underlying trend still remains a concern. She noted “Although this indicates the sector is still in expansion mode, the unadjusted series has tended to trend down since late 2017. If this trend continues, it will eventually have negative consequences for the main published result”.

BNZ Senior Economist, Doug Steel said that “the headline PMI looks reasonable but some of the details have cooled off including new orders. It raises questions for those looking for a strong growth pickup later in 2019”.

The economic calendar is rather light today. Eurozone will release April CPI final. US will release leading indicator and U of Michigan sentiment final.

USD/JPY’s recovery from 109.02 was limited by 4 hour 55 EMA and 110.03 minor resistance. Intraday bias remains neutral first and recent fall is expected to resume sooner rather than later. On the downside, break of 109.02 will resume the fall from 112.40 to retest 104.69 low. Nevertheless, break of 110.04 minor resistance will indicate short term bottom. Lengthier consolidation could then be seen before another decline. 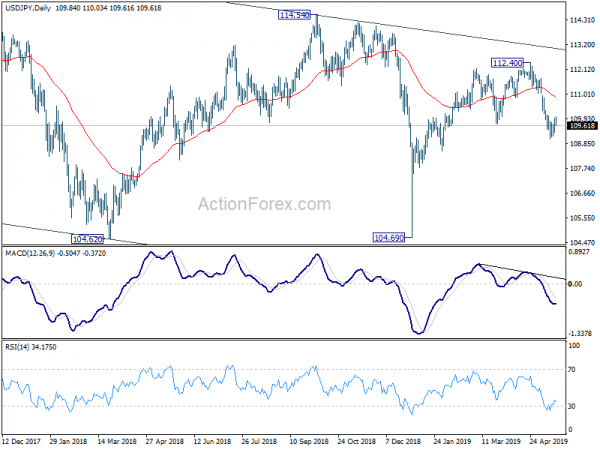