Talks of Fed rate cut intensified overnight after comments from Fed Chair Jerome Powell. Markets are now even pricing in 90% of a cut by September FOMC meeting. US stocks rebounded strongly with DOW closed up 512.40 pts or 2.06%. Positive sentiments carried through to Asia will broad based rallies in the markets. Meanwhile, Dollar is clearly the casualty in the turn in sentiments.

In the currency markets, after this week’s selloff, the greenback remains the weakest one for today so far. Swiss Franc follows as second weakest, then Sterling. Commodity currencies are the strongest ones, led by New Zealand Dollar and then Aussie. The picture for the week is similar, Dollar is overwhelming the weakest one, followed by Yen and then Sterling. Commodity currencies are strongest for the week so far.

Technically, the first thing to note is that Dollar index breached 97.02 support yesterday, and the case of bearish trend reversal is building up. Both AUD/USD and USD/CAD are showing some commitment to reversals. In particular, USD/CAD has taken out 1.3429 support firmly. Focus will immediately be on 1.3357 support today. Firm break will confirm bearish reversal in USD/CAD. EUR/USD is, for now, still hesitating and pressing 1.1263 resistance. But decisive break would prompt more broad based selling in Dollar.

Markets pricing in 90% chance of Fed cut by September

Markets are adding their bets on Fed rate cut after recent development in the markets as well ass comments from Fed officials. As of now, Fed fund futures are pricing in 90.3% chance of a Fed cut by September meeting. That’s sharply higher that around 49.6% a week ago and 24.6% a month ago.

Fed chair Jerome Powell’s comments yesterday, while brief, were taken most seriously. He firstly noted ” recent developments involving trade negotiations and other matters”. Fed is “closely monitoring the implications of these developments for the U.S. economic outlook”. And Fed ” will act as appropriate to sustain the expansion, with a strong labor market and inflation near our symmetric 2 percent objective.” His comments were taken a nod to cutting interest rates if outlook worsen on trade wars.

Vice Chair Richard Clarida some what echoed Powell’s comments. Clarida noted ” policymakers would “put in place policies that not only achieve but sustain price stability and maximum employment”. The key here is again to “sustain” price stability and maximum employment. Though, he also emphasized that fed shouldn’t be “handcuffed” to market pricing. And the US is just “early into” yield curve inversion while is not a “strong signal of concern” yet.

As a recall, St. Louis Fed President James Bullard was the first one to call for a rate cut earlier this week. He noted , a rate cut could be coming soon to help “re-center inflation and inflation expectations”. That would provide “insurance” in case of “sharper-than-expected slowdown” as “global trade uncertainties have become more severe.” Meanwhile, “even if the sharper-than-expected slowdown does not materialize, a rate cut would only mean that inflation and inflation expectations return to target more rapidly.”

Chicago Fed President Charles Evans was still confident on the economy but he’s open to some policy actions. He said in a CNBC interview that the economy remains solid and interest rate is at the right place. And, “our current setting has been appropriate, but if we sense that there was some greater uncertainty, some softening, we’d have to take that into account and ask, are we getting in the way of the economy.”

Dallas Fed President Robert Kaplan was more patient regarding the impact of trade tensions between US, China and Mexico. He said: “I want to take a little bit more time and be patient here, because some of these recent events could be reversed… Worth being cognizant of the fact that these recent tensions have just elevated in the last five, six weeks… And in the next five, six weeks, a number of them could be alleviated.”

Australian GDP grew 0.4% qoq in Q1, matched expectations. Annually, growth slowed to 1.8% yoy, down from 2.3% yoy and matched expectations too. But the details are rather weak. Government spending was the main contributor to growth, while rose 0.8%. Household spending slowed to 0.3% and contributed a modest 0.1%. And, dwelling investment contracted by -2.5% while slowing housing market has resulted in significant falls in ownership transfer costs. Non-mining investment rose 2.0% while mining investment dropped -1.8%.

Separately, RBA Head of Economic Analysis Alexandra Heath said in a report that “mining investment is probably around its trough and is likely to pick-up gradually over the next year or so”. And, “resource exports are also expected to contribute to GDP growth before plateauing at a new, higher level.”

Also from Australia, AiG Performance of Services Index rose to 52.5 in May, up fro 46.5.

China Caixin PMI Services dropped to 52.7 in May, down from 54.5 and missed expectation of 54.2. PMI Composite dropped to 5.15, down from 52.7. Markit noted that “overall confidence towards the year ahead weakened to the lowest on record, which was primarily driven by weaker sentiment at manufacturers”. Also, “expectations at goods producers were the least upbeat since the series began in April 2012″, ” services firms registered the lowest degree of confidence since July 2018″.

USD/CAD drops to as low as 1.3376 so far and intraday bias remains on the downside. Current development suggests that choppy rise from 1.3068 has completed at 1.3564, on bearish divergence condition in 4 hour MACD. Decisive break of 1.3357 support will confirm this bearish case and target 1.3274 support next. More importantly, that could also have medium term channel support taken out, which carries larger bearish implications too. On the upside, break of 1.3449 minor resistance is needed to indicate completion of fall from 1.3564. Otherwise, further decline remains in favor in case of recovery. 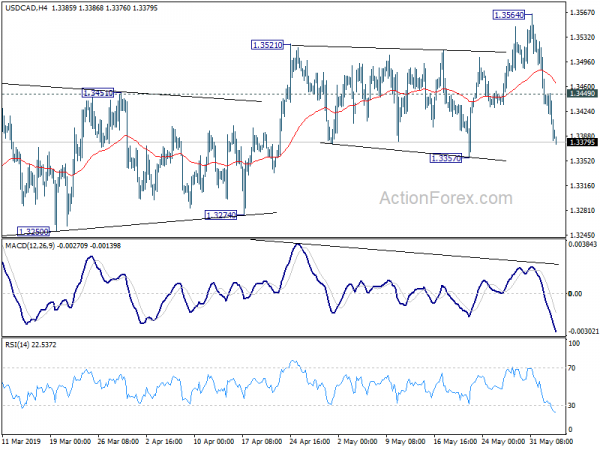 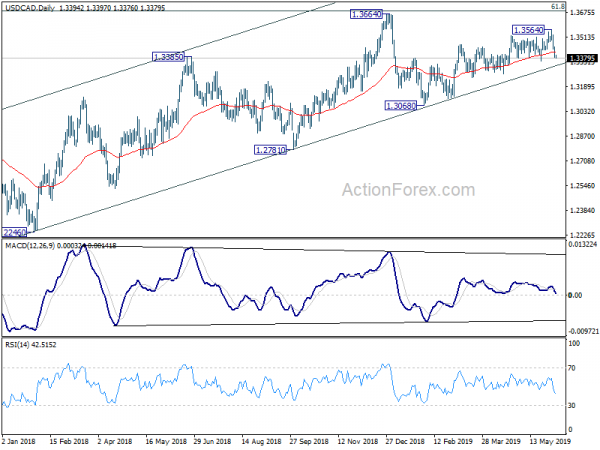