Trading in the currency markets are relatively subdued today as US is on holiday. Major volatility is seen in the bond markets, as German 10-year yield hits another record low. Expectations on ECB easing continues to intensify, with an official explicitly calling for action now. Swiss Franc is currently the strongest one, followed by Yen and then Canadian Dollar. On the other hand, New Zealand Dollar and Australian Dollar are the weakest. But the picture at weekly close could be changed drastically with non-farm payroll report tomorrow.

Technically, USD/CAD will be a major focus as it seems to be finally breaking 1.3052/68 cluster support zone. Sustained break will carry medium term bearish implications. EUR/CAD has taken out 2018 low of 1.4759 support earlier this week. It would now be targeting 1.4253 projection level in medium term.

German 10-year bund yield drops to another record low of -0.407 so far today. More importantly, it’s now below ECB’s -0.40% deposit rate for the first time ever. The steep decline is interpreted as a clear sign that markets are expecting further rate cut by the central bank.

Firstly, ECB President Mario Draghi has already set the easing course last month, even though he’s on the way out later this year. Secondly, the nomination of current IMF Managing Director Christine Lagarde is seen as a node to further easing.

Such expectation is further affirmed by explicitly dovish comments from Governing Council member Olli Rehn. He told  German newspaper Boersen Zeitung that “if we really want to live up to our mandate, further monetary stimulus is now needed until there is improvement in economic and inflation prospects”.

“We should no longer see the recent slowdown in growth as a brief temporary dip in the economy, as a ‘soft patch’, Rehn added. “We are experiencing a longer phase of weaker growth.” Also, what is also of great concern to us now are inflation expectations,” Rehn said. “Market-based inflation expectations have fallen sharply and remain far too low.”

Eurozone retail sales dropped -0.3% mom in May, below expectation of 0.4% mom rise. Volume of retail trade decreased by -1.3% for automotive fuel, by -0.5% for food, drinks and tobacco, and by -0.1% for non-food products

China: US must lift all punitive tariffs for a trade deal to be reached

Gao Feng, spokesperson of China’s Ministry of Commerce, said US must remove all punitive tariffs for a trade deal to be reached between the two countries. He noted in a regular press briefing that tariffs hurt both sides and ultimately harm the interests of American corporations and consumers. Tariffs also create uncertainty for the global economy. Gao also confirmed that teams from both sides are in contact on trade negotiations.

USD/CAD drops to as low as 1.3037 so far today. Sustained trading below 1.3052/68 cluster support zone will carry larger bearish implications. Deeper fall should be seen to 1.2673 fibonacci level next. Nevertheless, rebound from current level, with break of 1.3145 minor resistance, will indicate short term bottoming and bring rebound back to 1.3239 support turned resistance. 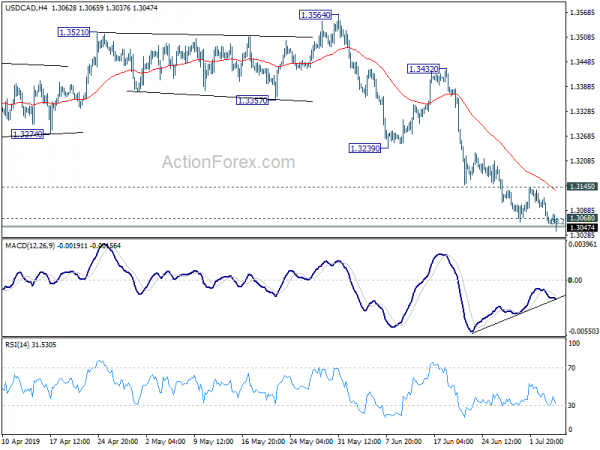 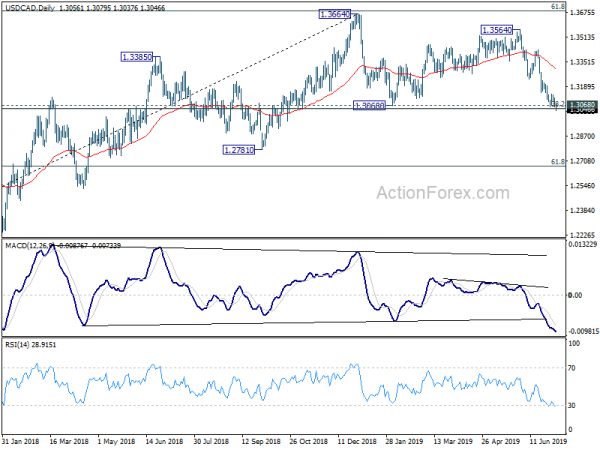