Dollar stabilizes in Asian session after steep decline overnight. Bets on Fed’s rate cut this month jumped after dovish comments from some key Fed officials. It seems that Fed might choose not to listen to the solid economic data released recently, but opt for the path of insurance. Treasury yield also tumbled notably. Gold rides on the greenback’s weakness and breaks 1440 handle.

Staying in the currency markets, Dollar is indeed not the worst performing one for the week so far. But Sterling is the weakest, followed by Euro and the Canadian. New Zealand Dollar is the strongest for the week, followed by Australian and the Yen. But the picture could still change before weekly close.

Technically, AUD/USD’s break of 0.7047 resistance confirmed resumption of rise from 0.6831 for 0.7118 fibonacci level next. USD/CAD breached 1.3018 temporary low but couldn’t sustain below 1.3052/68 cluster support yet, probably waiting for Canadian retail sales. EUR/USD is stuck in range of 1.1193/1285 despite yesterday’s rebound, keeping near term outlook neural. GBP/USD is also held below 1.2579 resistance so far, keeping near term outlook bearish.

Dollar tumbled broadly as markets took New York Fed President John William’s speech as indication of aggressive rate cut in the upcoming FOMC meeting on July 31. Fed fund futures now indicate 46.2% chance of -50bps cut, comparing to 34.3% a day ago and 19.9% a week ago. Overall, markets are still pricing 100% chance of easing then.

Williams said in a speech “Living Life Near the ZLB” (Zero Lower Bound), that when interest rates are in the vicinity of the ZLB, policymakers shouldn’t “keep your powder dry”. That is, they should “move more quickly to add monetary stimulus” to “vaccinate against further ills”.

Also, he said “it’s better to take preventative measures than to wait for disaster to unfold”. And, “when you only have so much stimulus at your disposal, it pays to act quickly to lower rates at the first sign of economic distress.”

Later, in an unusual step, a New York Fed spokesperson “clarified” Williams’ comments. She said, “this was an academic speech on 20 years of research. It was not about potential policy actions at the upcoming FOMC meeting.”

Fed Vice Chair Richard Clarida also reinforced Williams’ dovish comments. Clarida told Fox Business Network that “you don’t need to wait until things get so bad to have a dramatic series of rate cuts.” And, “you don’t want to wait until data turns decisively if you can afford to.”

Clarida reiterated that the US economy is “in a good place”. But “we’ve had mixed data” and “disinflationary pressures, if anything, are more intense than I thought six weeks ago.” He added, “we need to make a decision based on where we think the economy may be heading and, importantly, where the risks to the economy are lined up.”

In a CNN interview, St. Louis Fed President James Bullard said trade uncertainty used to be an issue that was on the “back burner”. However, “the president moved it to the front burner”. And now, “trade uncertainty is high and I don’t see that declining anytime soon”.

Bullard added that the economy is “slowing down” and warned “what if it slows more than we think, possibly because of a trade war?”. A rate cut would “provide a bit of insurance against that”.

Nevertheless, regarding a 50bps cut, Bullard said “I don’t think we need to go that far” adding that “the critical thing here is to get inflation and inflation expectations better centered.”

CPI core was the lowest reading since July 2017. No turnaround is expected in the near term. Instead, CPI core could be further dragged down by policy related factors, including mobile phone charges and education costs.

The dim inflation outlook highlights the pressure for BoJ to ramp up monetary stimulus. In particular, both Fed and ECB are expected to loosen up policy again later this week.

Germany PPI, Eurozone current account and UK public sector net borrowing will be released in European session. Canada will release retail sales. US will release U of Michigan sentiment. 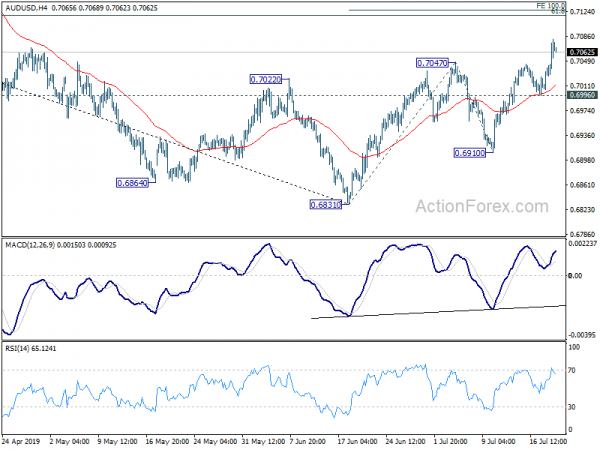 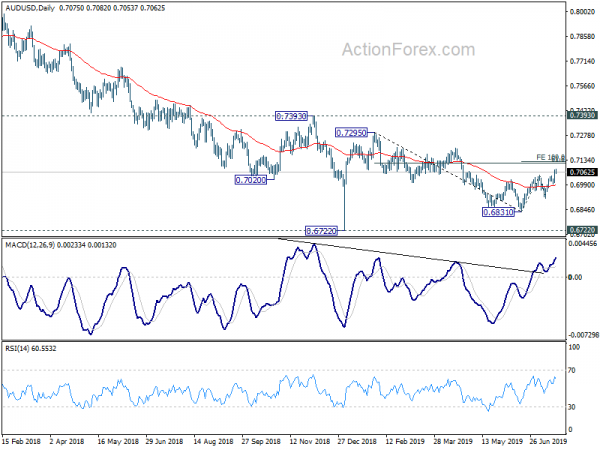