Yen opens the week broadly higher, following mild risk aversion in Asian markets. Traders are turning cautious ahead of FOMC rate decision, a string of worldwide economic data, as well as resumption of US-China trade negotiations. Swiss Franc is the second strongest so far while Dollar is the third. On the other hand, commodity currencies are generally lower together with Sterling. The Pound is awaiting more guidance from Prime Minister Boris Johnson on how he’s handling Brexit.

Technically, GBP/USD’s break of 1.2382 suggests decline resumption. Sustained trading below 1.2391 low would confirm medium term down trend resumption for next key level at 1.1946 (2016 low). EUR/USD recovered after breaching 1.1107 low. Subsequent recovery has been weak and focus remain on this key support level. Sustained break will resume down trend from 1.2555. Meanwhile, 0.9951 resistance in USD/CHF and 108.99 in resistance in USD/JPY will also be watched to confirm underlying Dollar strength.

US-China trade negotiations to restart on Tuesday, expectations are low

US-China trade negotiations are set to resume in Shanghai on Tuesday but expectations are rather low. US Trade Representative Robert Lighthizer and Treasury Secretary Steven Mnuchin will meet China’s team again for a two day meeting. Trump indicated on Friday that China may want to drag on till after 2020 election in the US. He told reported at that White House China would probably said “let’s wait and see if one of these people who gives the United States away, let’s see if one of them could get elected.”

White House economic adviser Larry Kudlow also said on Friday he “wouldn’t expect any grand deal” at this week’s meeting. Instead, the team would just try to “reset the stage”. Though, he added, “we strongly expect the Chinese to follow through (on) goodwill and just helping the trade balance with large-scale purchases of US agriculture products and services.”

Separately, China’s state media CCTV said on Sunday, citing the National Development and Reform Commission and Ministry of Commerce, that the country has already made enquiries to US suppliers for soybeans, cotton, pork, sorghum and other agricultural products since July 19. CCTV reported “as long as the American agricultural products are reasonably priced and of good quality, it is expected that there will be new purchase.” though, it also urged that US should  “take concrete measures to implement its relevant commitments and create favorable conditions for bilateral economic and trade cooperation”.

CBI: Both UK and EU are under-prepared for no-deal Brexit

The Confederation of British Industry warned in a report, published on Sunday, that neither UK nor EU are ready for no deal Brexit, as contingency planning study finds. The report criticized that while US has made many proposals “many of its plans delay negative impacts but do not remove them”. EU has “taken fewer steps to reduce the damage of no deal”. And, “very few joint actions to mitigate no deal have taken place, creating a high number of areas where continued UK-EU negotiations are inevitable”. Business efforts have been “hampered by unclear advice, tough timelines, cost and complexity”.

Josh Hardie, Deputy-Director General, said: “. Both sides are underprepared, so it’s in all our interests. It cannot be beyond the wit of the continent’s greatest negotiators to find a way through and agree a deal… It’s not just about queues at ports; the invisible impact of severing services trade overnight would harm firms across the country… Preparing for no deal is devilishly difficult. But it is right to prepare.”

Fed rate cut to highlight the week, but economic data could be equally market moving

Three central banks will meet this week. BoJ and BoE are both expected to keep monetary policy unchanged. BoE will also release quarterly Inflation Report with new economic projections. But both events could be largely ignore by the markets. Main even is FOMC meeting which is expected to deliver a -25bps rate cut. We’d emphasize that it’s not exactly as certain as markets have priced in. Even if a cut is delivered, voting should be non-unanimous and Fed could indicate that it’s more of a one-off. There is prospect of Dollar buying after that. Suggested readings on Fed: FOMC Preview – Expecting -25 bps Cut From a Divided Fed.

Economic data featured this week will very likely be market moving too. US will release PCE inflation, ADP employment, ISM manufacturing and non-farm payrolls. These data are important to decide whether Fed’s rate cut would continue forward. Also, Eurozone GDP, CPI and unemployment will reveal how bad the economy is heading to, and thus, the need for additional EB stimulus. 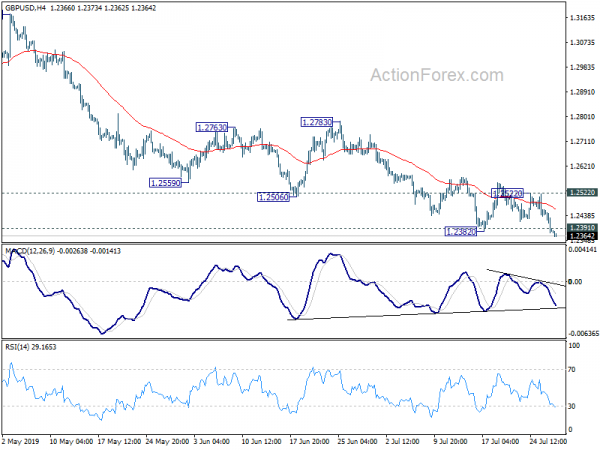 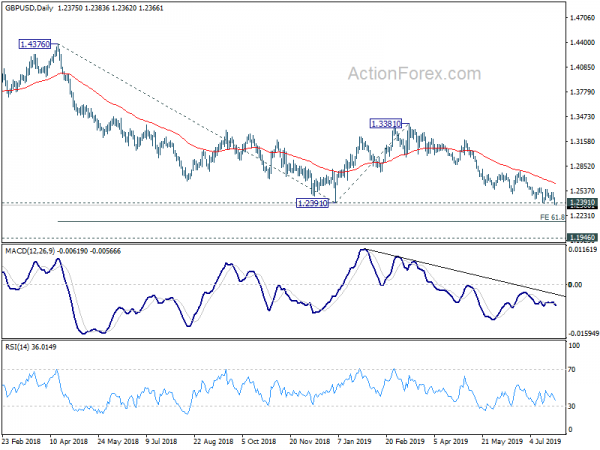