Swiss Franc and Yen continue to trade as the strongest ones for today on risk aversion, as US-China trade war escalates. Global equity markets are under heavy selling pressure, with DOW futures down around -100 pts. German 10-year yield hits another record low at -0.499 and stays soft. Dollar is mixed for now, receiving little support from solid non-farm payroll report. Yen, commodity currencies are generally the weakest ones.

Technically, AUD/USD’s firm break of 0.6831 support confirms down trend resumption. Next target is 0.6722 flash crash low. USD/CAD is trying to accelerate upwards and we’re expecting a test on 1.3432/3564 resistance zone. USD/JPY follows EUR/JPY and GBP/JPY lower. With 106.78 support taken out, it should be heading towards 104.69 low. EUR/GBP’s recovery lost momentum ahead of 0.9198 temporary top, and is set to end the week below there.

US non-farm payroll grew 164k in July, slightly below expectation of 169k. That was still in-line with the average growth in the first six months of the year, but notably below 2018 average of 223k per month. Prior month’s figure was revised down from 224k to 193k.

Also released, US trade deficit narrowed slightly to USD -55.2B in June. Canada trade surplus came in smaller than expected at CAD 0.1B.

China pledges to take countermeasures against new US tariffs

Chinese Foreign Ministry spokesperson Hua Chunying warned today “if America does pass these tariffs then China will have to take the necessary countermeasures to protect the country’s core and fundamental interests”. She also reiterated the usual stance of China that “we won’t accept any maximum pressure, intimidation or blackmail. On the major issues of principle we won’t give an inch.”

The response came after Trump announced yesterday to start imposing 10% tariffs on USD 300B of Chinese imports. That’s effectively the rest of all untaxed Chinese goods. New tariffs are expected to take effective on September 1. Trump complained that Chinese President Xi Jinping was “not going fast enough” with his promises even Xi wanted to make a deal. And he threatened to raise tariffs further if China fails to more move quickly onwards. That could include moving beyond 25% tariffs already imposed on another USD 250B of Chinese imports.

At this point, it’s uncertain what retaliation China would take yet. Possible measures include banning export of rare earth, and penalties against US companies in China, tariffs on crude oil and aircrafts, formalizing the “unreliable entities”, etc.

UK PMI construction dropped to 45.3, retrenchment could soon spillover to other parts of economy

UK PMI Construction recovered to 45.3 in July, up from 43.1 (10 year low) but missed expectation of 46.0. And, it’s still the fifth straight month of sub-50 contraction reading. Markit noted that construction activity fell for the third month in a row. There was sharp drop in new work and purchasing activity during July. Business optimism also slid to its lowest since November 2012.

Tim Moore, Economics Associate Director at IHS Markit, said: “UK construction output remains on a downward trajectory and another sharp drop in new orders has reduced the likelihood of a turnaround in the coming months… If the current speed of construction sector retrenchment is sustained, it will soon ripple through the supply chain and spillovers to other parts of the UK economy will quickly become apparent.”

South Korean Finance Minister Hong Nam-ki gave his warning to Japan regarding escalating tensions between the two countries. Hong said the government is planning to take steps to drop Japan from the white list countries with fast-track export status. This is in response to similar move by Japan earlier.

Hong also added that Japan’s measures will affect 159 exports items from South Korea. And the government pledged to provide support the companies affected.

South Korean President Moon Jae-in pledged “we won’t be defeated by Japan again”, regarding the trade tensions. He described Japan as a “selfish nuisance” for disrupting the global supply chain.

Australia retail sales rose 0.40% mom in June, above expectation of 0.3%. This followed 0.1% rise back in May. Ben James, Director of Quarterly Economy Wide Surveys said “there were rises in five of the six industries this month, although overall the retail environment remains subdued”. 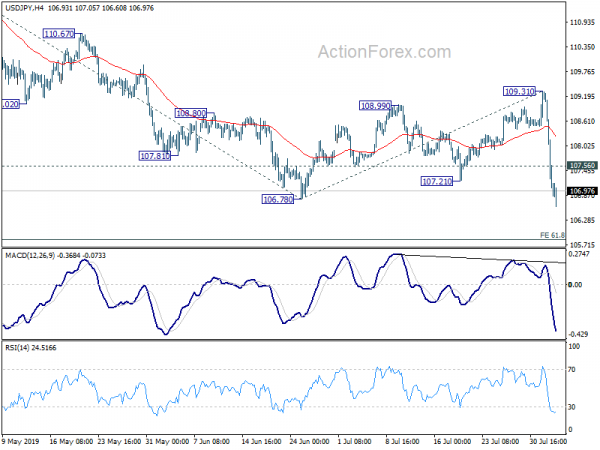 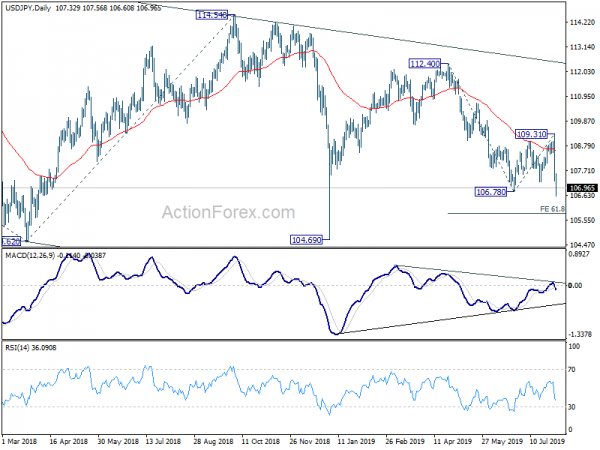