Technically, EUR/USD was rejected by near term falling channel resistance and focus could be back to 1.0926 low. Though, as long as this support holds, near term consolidations could still expected. Recovery in USD/CHF also puts focus back to 0.9946 temporary top. Break will resume the choppy rebound from 0.9569. USD/CAD recovered after initial dip today. With 1.3177 minor support intact, rebound from 1.3133 is still in favor to extend to 1.3382 resistance.

US Empire State Manufacturing Survey general business conditions index dropped to 2.0 in September, down from -4.8 and missed expectation of 4.0. 27% of respondents reported that conditions had improved over the month, but 25% said conditions had worsened. Number of employees index jumped sharply from -1.6 to 9.7, back in positive territory. The index for future business conditions fell -12 points to 13.7, suggesting that “optimism about future conditions waned”.

ECB Governing Council member Yannis Stournaras said there is strong case for incoming President Christine Lagarde to maintain policy stimulus. And, he added, “stimulus package last week was necessary because inflation remains very low. Benefits of taking action now exceed to a large extent the costs. There has been an insufficient contribution from fiscal policy.

Another Governing Council member Pablo Hernandez De Cos urged stronger progress towards fiscal union. He said in an event in Spain that “I strongly believe that a central fiscal capacity at euro area level could contribute … to macroeconomic stabilization.” Additionally, “monetary policy would not become overburdened, as it might be in the current economic juncture.”

UK Prim Minister Boris Johnson’s office issued a statement after his meeting with European Commission President Jean-Claude Juncker. The statement noted “the leaders agreed that the discussions needed to intensify and that meetings would soon take place on a daily basis”.

And, “It was agreed that talks should also take place at a political level between Michel Barnier and the Brexit Secretary, and conversations would also continue between President Juncker and the Prime Minister.”

Johnson’s spokesman also reiterated that he would not request a delay to Brexit beyond October 31.

Chinese Premier Li Keqiang warned that the economy is facing “certain downward pressure” due to global slowdown and rise of protectionism. And, it’s “very difficult” for GDP to grow at 6% rate or higher. He said “for China to maintain growth of 6% or more is very difficult against the current backdrop of a complicated international situation and a relatively high base, and this rate is at the forefront of the world’s leading economies.”

The new WTO’s Services Trade Barometer came in at 98.4, slightly below baseline value of 100. The reading indicates that serves trade continued to face strong headwinds into second half of the year.

WTO noted that “declines in most of the Services Trade Barometer’s component indices drove the second quarter softening, as they signalled a broad loss of momentum across various services sectors.” However, despite loss of momentum this year, “services trade has generally held up better than goods trade since the latter is more directly affected by recent trade tensions.”

EUR/USD was rejected by near term falling channel resistance and drops notably today. But downside is held well above 1.0926 low. Intraday bias remains neutral first and more consolidation could be seen. Overall outlook remains bearish as long as 1.1164 resistance holds. Firm of 1.0926 will resume lager down trend from 1.2555 for 1.0813 fibonacci level next. However, firm break of 1.1164 will be an early indication of larger reversal and target 1.1249 resistance . 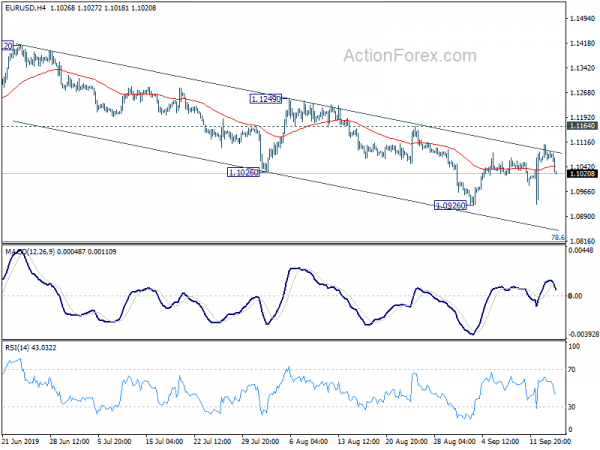 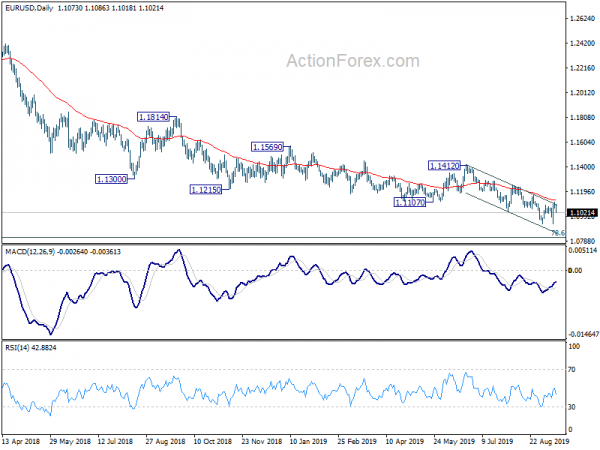